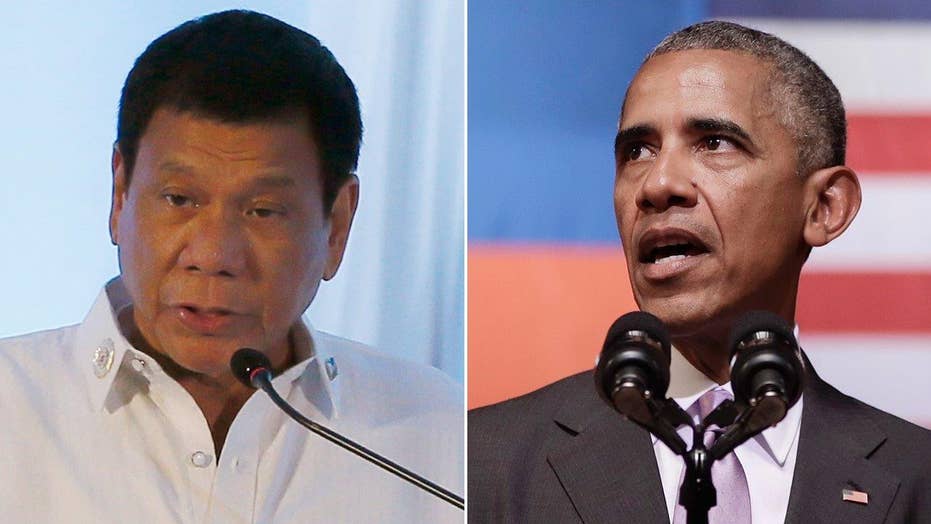 Duterte made the remark in a speech in which he again railed at the U.S. with expletives for criticizing his deadly anti-drug crackdown, calling American officials "monkeys" and breaking a promise that he would no longer resort to trash talk.

Duterte, who took office in June, has been antagonistic to U.S., EU and U.N. officials who have raised human rights concerns over his brutal crackdown on illegal drug sellers and users and called for an end to extrajudicial killings.

He has used expletives in responding to their criticisms, telling President Barack Obama to "go to hell" in an outburst last month. He has declared his intention to scale back his country's military engagements with Washington, including ending largescale joint combat exercises and the presence of visiting U.S. forces, while reaching out to expand once-frosty relations with China and Russia.

FILIPINO MAYOR AMONG 10 DEAD IN CLASH WITH ANTI-DRUG POLICE

U.S. officials, however, say they have not been formally notified by the Philippines of any change in security relations and activities and stress that Washington wants to continue its decades-long alliance with Manila.

Duterte said he has asked his defense secretary and military officials to travel to China and Russia to check what weapons and defense equipment they have to offer, but added that the military's recommendation will be crucial.

"China is open. Anything you want. They even sent me a brochure, telling me to choose and they will provide," Duterte said.

"I'm just holding off because I'm looking at the military," he said. "If you want to stick with America, fine, but assess it well and find a balance because we are being ridiculed."

The brash president traveled to a wharf in Sual town in the northwestern province of Pangasinan to lead a poignant send-off ceremony for 17 Vietnamese fishermen who were arrested last month for poaching in local waters. The complaints were dropped after the Vietnamese said a typhoon forced their three boats toward the northern Philippines and that they had no intention of poaching.

Duterte said his Vietnamese counterpart appealed for the fishermen's release and Wednesday's ceremony -- in which he shook hands with the fishermen and handed each a bag filled with food, a raincoat and toiletries -- showed how Asians resolve problems.

"Vietnam drove the Americans away in humiliation," Duterte said, using the ceremony to criticize U.S. actions that he said brought countries like Iraq, Syria and Libya to chaos and civil strife.

"I have good impressions of America but the problem is I have lost my respect, that's why I'm bad-mouthing them," he said. "These Americans never learned their lesson with their interventions."