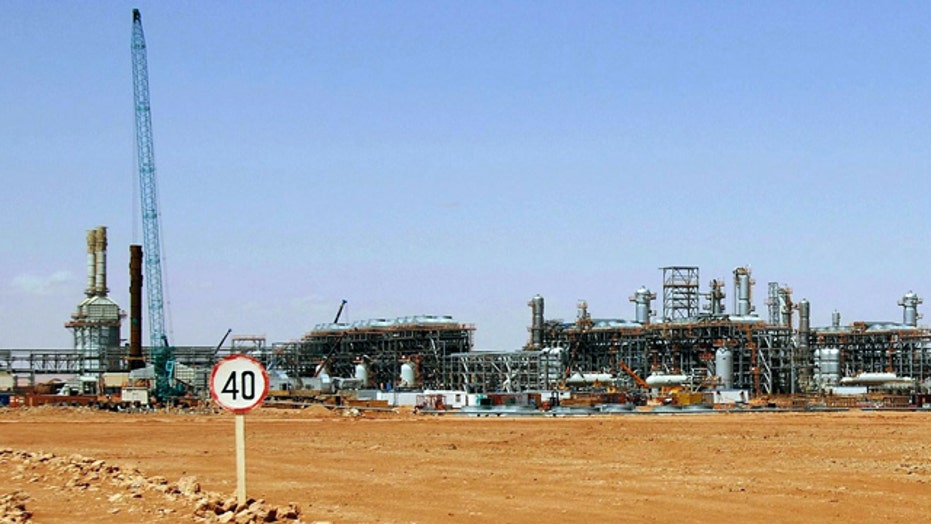 Officials: One American killed in Algeria

Algerian authorities gave no indication of how many people were still captive at natural gas complex in Algeria the day after an American worker was found dead at the plant and the U.S. sought to secure the release of Americans still being held by Al Qaeda-linked terrorists.

Frederick Buttaccio, a Texas resident, died of a heart attack during a raid by the Algerian military to end the standoff, Fox News confirmed Friday. The general manager of the complex, Mark Cobb, also of Texas, was able to escape with members of his Algerian staff and is safe.

A spokesman for the Buttaccio family in the Houston suburb of Katy, Texas, declined to comment.

"We can confirm the death of U.S. citizen Frederick Buttaccio in the hostage situation in Algeria," State Department spokeswoman Victoria Nuland said. "We express our deepest condolences to his family and friends. Out of respect for the family's privacy, we have no further comment."

It was not immediately clear whether Buttaccio was the only American killed in the hostage standoff.

U.S. officials told The Associated Press that Buttaccio's remains were recovered Friday. Officials spoke on condition of anonymity because they weren't authorized to speak publicly on the matter.

Secretary of State Hillary Rodham Clinton said she spoke by telephone with Algerian Prime Minister Abdelmalek Sellal to get an update on Americans and others in danger at the sprawling Ain Amenas refinery 800 miles south of Algiers. She said the "utmost care must be taken to preserve innocent life."

Clinton talked to reporters after the Obama administration confirmed that Americans were still being held hostage, even as some U.S. citizens were being flown out of the country for recovery in Europe. The Algerian state news agency reported that 12 hostages had been killed since Wednesday's start of an Algerian rescue operation, and world leaders steadily increased their criticism of the North African country's handling of the attack.

Clinton, however, defended Algeria's action. "Let's not forget: This is an act of terror," she told reporters in Washington. "The perpetrators are the terrorists. They are the ones who have assaulted this facility, have taken hostage Algerians and others from around the world as they were going about their daily business."

Earlier Friday, Algeria's state news service reported that nearly 100 of the 132 foreign workers kidnapped by Islamic militants were free. That number of hostages at the remote desert facility was significantly higher than any previous report, but questions remained about the fate of more than 30 other foreign energy workers Saturday.

BP evacuated one American, along with other foreign workers, to Mallorca, Spain, and then to London. And an American official said a U.S. military C-130 flew a group of people, including some lightly wounded or injured, from Algiers to a U.S. facility in Europe on Friday. The official wasn't authorized to speak publicly on the matter and requested anonymity.

In London, Defense Secretary Leon Panetta met with British Prime Minister David Cameron at No. 10 Downing St. to assess their governments' understandings of the situation. At King's College, Panetta said the U.S. is "working around the clock to ensure the safe return of our citizens" and that terrorists should be on notice they will find no sanctuary in Algeria or North Africa.

The White House said President Barack Obama was being briefed Friday by his national security team. His top aides were in touch with Algerian officials as well as BP's security office in London. BP jointly operates the natural gas plant.

U.S. officials have refused to confirm the number of Americans still captive or unaccounted for because they say that might compromise their safety.

Still, the U.S. flatly rejected an offer by the militants -- led by a Mali-based al-Qaida offshoot known as the Masked Brigade -- to free two American hostages in exchange for the release of Omar Abdel Rahman, a blind sheikh convicted of plotting to blow up New York City landmarks and considered the spiritual leader of the 1993 World Trade Center bombing, and Aafia Siddiqui, a Pakistani scientist convicted of shooting at two U.S. soldiers in Afghanistan. Both are jailed in the United States.

The desert siege began Wednesday when the militants attempted to hijack two buses at the plant, were repelled, and then seized the gas refinery. They said the attack was retaliation for France's recent military intervention against Islamist rebels in neighboring Mali, but security experts argue it must have taken weeks of planning to hit the remote site.

Since then, Algeria's government has kept a tight grip on information about the siege.

Clinton stressed that American officials would stay in close contact with their Algerian counterparts. Sellal, she said, made clear that the Algerian operation against the militants "was still ongoing, that the situation remained fluid, that the hostages remain in danger in a number of instances."

Speaking beside Japan's new foreign minister, Fumio Kishida, Clinton said the crisis underscored the threat posed by extremists in North Africa, where al-Qaida-linked militants have seized control of half of Mali and plunged the country into civil war. She vowed to enhance U.S. work with Algeria and other countries in the region to combat terrorists even after the hostage situation ends.

"It is absolutely essential that as we work to resolve this particular terrible situation, we continue to broaden and deepen our counterterrorism cooperation," Clinton said. "We will not rest until we do as much as we can ... to restore security to this vital region, and to bring those who would terrorize and kill innocent people to justice."