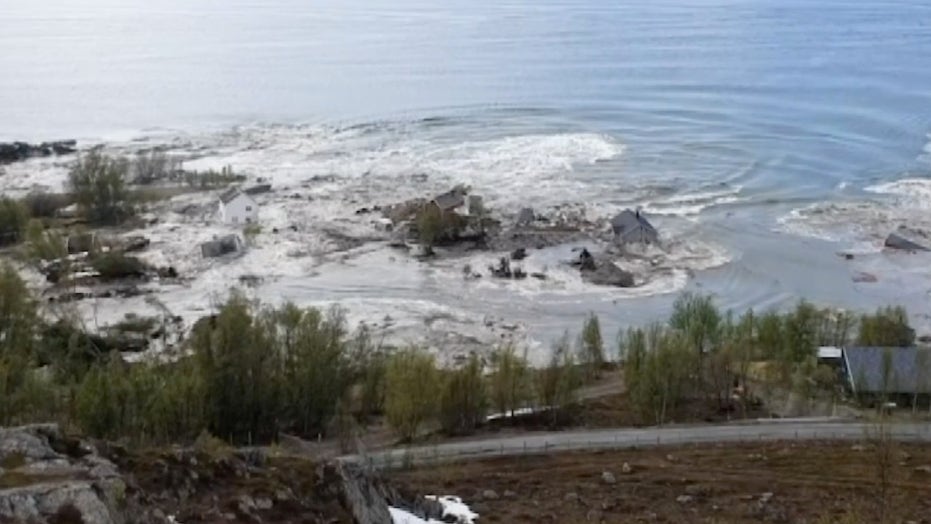 A powerful landslide in Arctic Norway was captured in dramatic footage Wednesday as eight houses and a dog were swept into the sea and disappeared beneath the churning waters.

No one was injured during the disaster near the town of Alta in northern Norway, and the dog was able to safely swim back to land, police spokesman Torfinn Halvari said.

Jan Egil Bakkedal, who owns one of the houses lost in the landslide, told the AP he was preparing a sandwich when he heard a huge noise and “ran for his life” into the surrounding hills.

Debris fills the bay near Alta, northern Norway after a powerful landslide that swept eight houses into the sea. (Anders Bjordal/NTB Scanpix via AP)

Bakkedal filmed from atop a hill as a massive chunk of land with homes overlooking the sea broke off and slid into the waters. In a matter of seconds, many of the homes sank under the swirling waves.

The Royal Norwegian Airforce released footage of the 1-year-old dog, an elkhound called Raija, running out of the wreckage into the hands of rescuers. The dog was reunited with its owners.

The aftermath of a powerful landslide near Alta, Arctic Norway.  (Anders Bjordal via AP)

Several minor landslides followed, and nearby houses were temporarily evacuated.

CALIFORNIA MUDSLIDES: WHERE AND WHY THEY HAPPEN

The far end of the cape where the landslide occurred was closed off Thursday.

Rocks continued to fall into the bay following the powerful landslide. (Anders Bjordal/NTB Scanpix via AP)

Alta Mayor Monica Nielsen said that “the extent of the damage is considerable, and there's a lot of debris.” Work was underway to ensure that the rubble doesn't end up in shipping lanes.