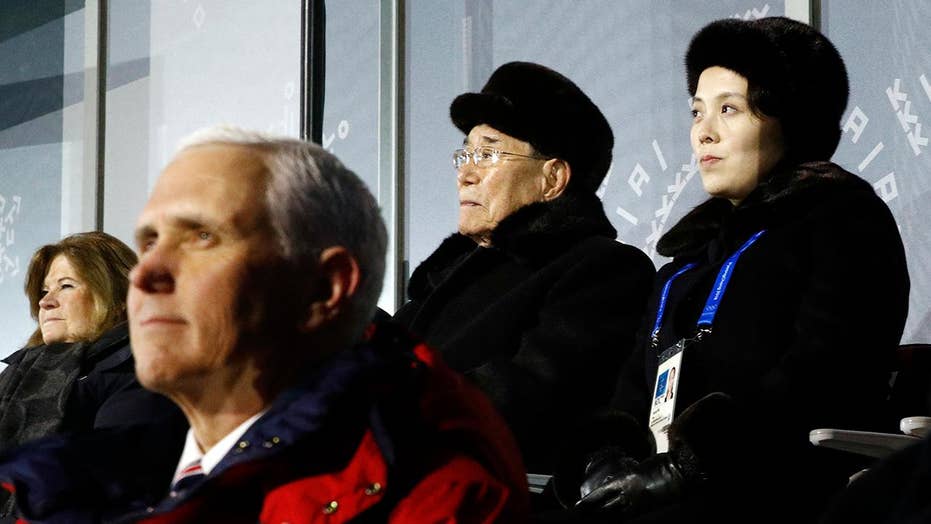 North Korea canceled meeting with Pence at the last minute

North Korea was reportedly put off by the tough talk from Vice President Pence.

There has been a muted and perplexed response here to reports that North Korea snubbed a planned meeting with Vice President Pence during his visit at the start of the Olympics.

The presidential "Blue House" did not respond to a Fox News request for comment. North Korean state media has not yet commented.

Experts here contacted by Fox question the strategy of disclosing information days after the canceled meeting.

“Clearly, there’s an agenda to getting this news out now,” said Yonsei University’s John Delury.

Delury said there could be several motivations for the U.S. to release the information.

- It retroactively pre-empts criticism the U.S. “blew the chance” to talk to North Korea.

- It prepares the U.S. public for the ”possibility of talking” in the future.

- It “undermines” the initiative led by President Moon Jae-in to get talks started.

Chad O’Carroll, editor of NK News, sees it as a standoff.

“…the North Koreans are trying to say if you want to talk to them, you can’t be applying maximum pressure,” he said, ‘but Pence made it very clear that maximum pressure would continue to be a top U.S. priority.”

going to be any chance for talks about talks with North Korea, “then one of the two sides is going to need to show some flexibility.”

officials continue to talk up the prospects of U.S.-North Korea talks. The Foreign Minister Wednesday called them the key to the denuclearization of the North.

Meanwhile, Ivanka Trump, daughter of and special advisor to the president, leads a U.S. delegation set to arrive on Friday for the Closing Ceremony. There are indications that she’ll continue to apply maximum pressure amid reports she'll meet with female North Korean defectors.

It's still not clear though who, if anyone, will represent North Korea at the close of these Games. All this leaving the chance to salvage Korean Olympic diplomacy up in the air.