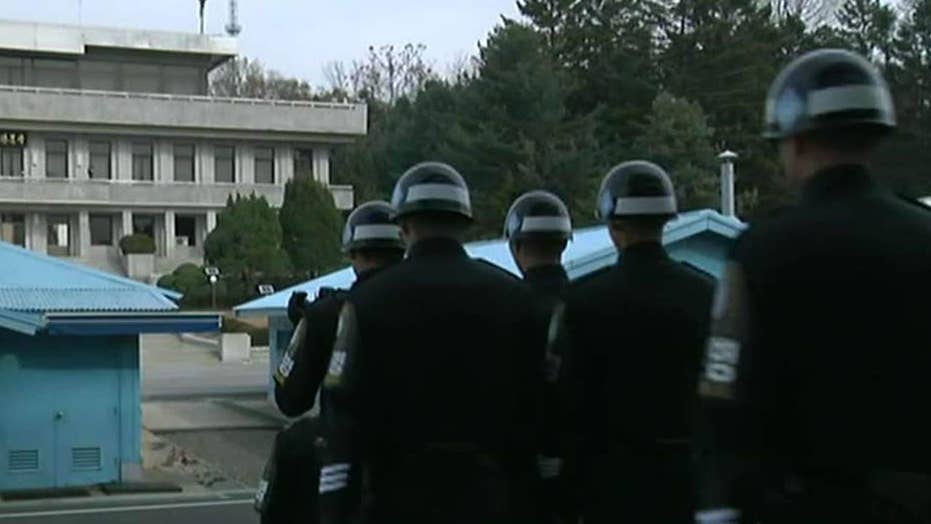 A North Korean soldier was shot at least five times as his comrades unleashed dozens of rounds at him during the man's desperate dash to defect at the Demilitarized Zone on Monday, the new details painting the escape as a more harrowing effort than what was initially reported.

The unidentified North Korean soldier-turned-defector remained at Ajou University Medical Center near Seoul on Tuesday, recovering from gunshot wounds that left him in “very dangerous” condition, said Lee Guk-jong, a doctor leading the medical team for the soldier. South Korea’s military said he suffered injuries to his internal organs but wasn’t in a life-threatening condition -- however, the medical center said the soldier was relying on a breathing machine after his surgery.

"[We] will have to ride out the crucial moments [in his recovery] over the next 10 days," the doctor said, according to South Korea’s Yonhap News Agency. He added the soldier’s survival would be determined in the coming days.

A South Korean army soldier, second from left, is seen as medical members treat an unidentified injured person, believed to be a North Korean soldier, at a hospital in Suwon, South Korea. (AP)

Initial details indicated the North Korean soldier bolted from his guard post at the Joint Security Area — a strip of land at the DMZ where North and South Korean forces stand face-to-face — on Monday and suffered two gunshot wounds to his elbow and shoulder. But South Korea’s military revealed the dash to freedom was much more complicated.

The North Korean soldier began Monday’s movie-like escape by driving a military jeep near the JSA, but he was forced to abandon the vehicle when one of its wheels fell off after it hit a ditch, Yonhap News Agency reported. Donning his North Korean military uniform, he dashed across the JSA as four North Korean soldiers chased and fired about 40 rounds with their pistols and AK-47 rifles, South Korea's military said, citing unspecified surveillance systems installed in the area. The soldiers allegedly began firing their guns at their comrade when he was in the jeep.

Doctors talk while treating a patient, believed to be a North Korean soldier, at a hospital in Suwon, South Korea. (AP)

The North Korean soldier “initially took cover near a building on the southern side of JSA,” the United Nations Command stated, according to Yonhap News Agency. South Korean troops eventually located him under a pile of leaves by crawling to him.

The soldier was unarmed at the time of the escape.

North Korean media, known for their bombastic threats against President Trump and its enemies, has stayed silent on the incident as of Tuesday. It’s reportedly rare for soldiers stationed at the DMZ to betray the regime because Kim Jong Un’s military officials “cherry pick” loyal comrades for the job.

The incident come nearly a week after Trump visited South Korea during his Asia trip. North Korea has previously accused South Korea of kidnapping or enticing North Koreans to defect. About 30,000 North Koreans have fled to South Korea, mostly through China, since the end of the 1950-53 Korean War. An estimated 1,000 North Koreans defect yearly, though they usually avoid the DMZ — fortified with land mines, barbed wire fences, machine guns and soldiers with binoculars — because of the dangerous conditions.

The JSA is jointly overseen by the American-led U.N. Command and by North Korea and is located inside the 2 1/2-mile-wide DMZ, which forms the de facto border between the Koreas since the Korean War. The truce village of Panmunjom in the JSA has become a tourist attraction and the site for rare talks.