South Korean President Moon Jae-In plans to deliver the message during a meeting with Pope Francis; Sen. Corey Gardner reacts to the report and U.S. relations with the regime.

While the Vatican and Pyongyang have no formal diplomatic relations, according to Channel News Asia, South Korean President Moon Jae-In plans to deliver the message next week during a meeting with Pope Francis.

"President Moon will visit the Vatican on Oct 17 and 18 to reaffirm its blessing and support for peace and stability of the Korean peninsula," Blue House spokesman Kim Eui-kyeom said during a news briefing, according to Channel News Asia. "Especially when he meets with Pope Francis, he will convey Chairman Kim's message that he will ardently welcome him if he visits Pyongyang."

Kim told Moon last month that the pope would be "enthusiastically" welcomed in North Korea, according to a statement.

Moon did not comment on whether a papal visit is likely, according to The Associated Press. The Vatican confirmed to the AP that the pope would receive Moon on Oct. 18, but had no immediate comment on the possibility of a visit by the pope to North Korea.

The statement appears to be a welcomed one, but the country is officially atheist and strictly controls religious activities. Christianity is deemed a “particularly serious threat,” according to the New York Times, citing a United Nations report. Christians who practice their religion are subject to “severe punishments.”

North Korea was ranked the worst nation for Christians, according to a 2018 World Watch Lists released by a Christian group called Open, the Times reported.

It was unclear if Kim made any effort to improve Pyongyang's treatment of Christians.

Despite North Korea’s history of stifling religious freedoms, this was not always the case – in fact Pyongyang was once known as the “Jerusalem of the East” for its magnitude of Christians, the Wall Street Journal reported. Before Kim’s grandfather, Kim Il Sung, came to power as North Korean state founder after World War II, thousands of Christians resided in the northern half of the peninsula.

Sung even built three churches in the city, according to the Journal.

The invitation was announced on the heels of what Secretary of State Mike Pompeo called a "very productive" meeting with Kim in Pyongyang on Sunday, as the two nations work reestablish stalled negotiations to denuclearize the peninsula.

The jovial feeling during Pompeo's fourth trip to North Korea appeared to be mutual. "It's a very nice day that promises a good future for both countries," Kim told Pompeo through a translator as they sat down for a 90-minute luncheon. 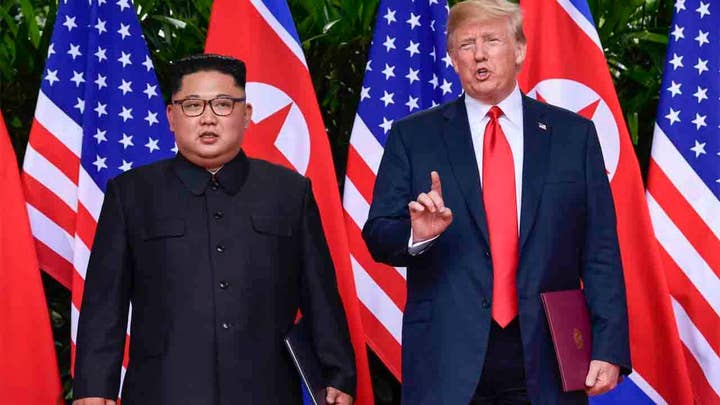 The atmosphere struck a different tone from recent negotiation talks.

In July, when Pompeo last visited North Korea, officials there almost immediately decried his “unilateral and gangster-like demand for denuclearization," souring relations between the two countries.

President Donald Trump abruptly canceled Pompeo’s scheduled trip in August after he felt North Korea was not “helping with the process of denuclearization as they once were."

Kim sent Trump letters in what seemed to be the icebreaker to once again spur talks with Washington.

"He wrote me beautiful letters, and they’re great letters," Trump told the crowd at a rally in West Virginia last week. "We fell in love.”

Pompeo has repeatedly refused to discuss details of negotiations, including a U.S. position on North Korea's demand for a declared end to the Korean War and a proposal from Seoul for such a declaration to be accompanied by a shutdown of the North's main known nuclear facility.

Since the denuclearization effort got underway with a secret visit to the North by then-CIA chief Pompeo in April, there has been only limited progress, even since the June 12 Trump-Kim summit in Singapore that many had hoped would jump-start the effort.

North Korea so far has suspended nuclear and missile tests, freed three American prisoners and dismantled parts of a missile engine facility and tunnel entrances at a nuclear test site. It has not taken any steps to halt nuclear weapons or missile development.