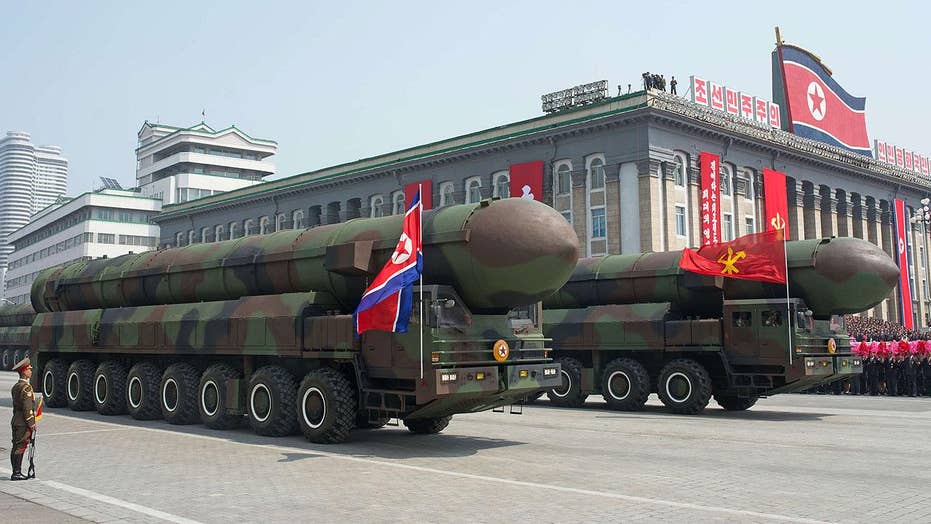 According to reports, the test launch appears to have failed

North Korea launched a ballistic missile on Friday, but the missile "broke up in flight" over the Peninsula and has been deemed a failure, two U.S. officials have confirmed to Fox News.

The missile has been assessed to be a KN-17, a former Scud missile that officials believe is being tested to one day target ships. It flew roughly 25 miles and was in the air for about 15 minutes, officials tell Fox News. The KN-17 was launched from Pukchang.

A White House official told Fox News that the U.S. is not suprised by this latest test, nor by the fact that it failed. President Trump has been briefed on the test, also, according to a White House statement.

The White House is watching the situation closely and consulting with China about Kim's behavior. The U.S. is moving toward pushing for another round of sanctions next week. President Trump responded to the failed launch on Twitter Friday night, calling it a "bad" development.

The KN-17 is a single-stage, liquid-fueled missile -- not the three-stage, solid-fuel missile that North Korea successfully tested back in February, which caused more concern among Pentagon officials.

North Korea routinely test-fires a variety of ballistic missiles, despite United Nations prohibitions, as part of its push to develop a long-range ballistic missile capable of hitting U.S. shores.

Monday, the Pentagon announced it was conducting a new nuclear posture review, two days after North Korea failed to launch a new type of ballistic missile, which exploded four seconds after launch.

The latest failed test over the weekend occurred hours before Vice President Pence touched down in Seoul. On Monday, he visited the Demilitarized Zone on the border between North and South and warned the rogue communist regime against conducting further tests.

Today's launch comes at a time when the Trump administration is considering how to deal with the threat from North Korea. Several administration officials, including Vice President Mike Pence, have said that the era of "strategic patience" with North Korea is now over.