Following reports that North Korea had launched multiple short-range “projectiles” this weekend -- initially thought to be missiles -- state-run media on Sunday said the rogue regime had performed a “defense units” test of its rocket launchers and tactical guided weapons.

"The purpose of the drill was to estimate and inspect the operating ability and the accuracy of striking duty performance of large-caliber long-range multiple rocket launchers and tactical guided weapons by defense units in the frontline area and on the eastern front," the Korean Central News Agency said, citing South Korea’s Yonhap News Agency.

The “strike drill” happened Saturday and was overseen by the country’s leader Kim Jong Un, according to the outlet.

The projectiles were fired from North Korea's east-coast town of Wonsan in a northeastern direction and reportedly toward the East Sea, the agency said, citing a news release. The launches took place "between 9:06 a.m. and 9:27 a.m." local time and reportedly flew up to 125 miles, according to the outlet. 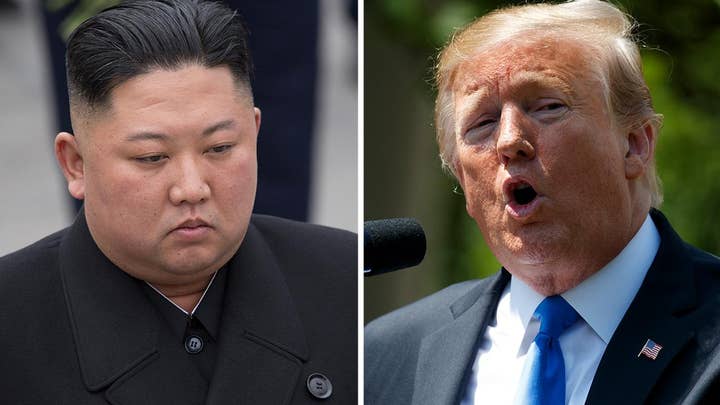 The Pentagon did not confirm the launches for Fox News, saying at the time that officials were looking into the report. But the White House issued a statement.

“We are aware of North Korea’s actions tonight. We will continue to monitor as necessary," White House Press Secretary Sarah Sanders said.

President Trump tweeted about his relationship with Kim around 9:45 a.m. ET, while also saying that a deal with North Korea would still happen.

“Anything in this very interesting world is possible, but I believe that Kim Jong Un fully realizes the great economic potential of North Korea, & will do nothing to interfere or end it,” he tweeted. “He also knows that I am with him & does not want to break his promise to me. Deal will happen!”

Earlier this year, President Trump and North Korean leader Kim Jong Un met in Vietnam for their second summit, but negotiations fizzled. The North requested sanctions relief in exchange for partial denuclearization measures. The U.S. balked at the request, insisting sanctions would not be relaxed until complete denuclearization.

The two world leaders had previously met in Singapore in June 2018, with both signing a document promising to work for "complete denuclearization of the Korean peninsula."

On Friday, Trump and Russian President Vladimir Putin discussed several topics, including North Korea during a phone conversation, according to a Twitter message from President Trump.