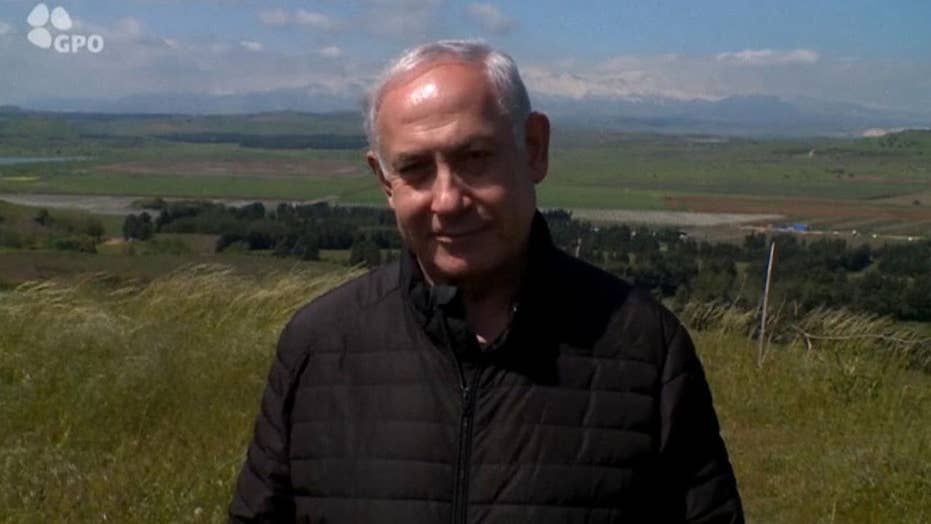 Raw video: Israeli Prime Minister Benjamin Netanyahu says he plans to bring a resolution calling for a new settlement in Golan Heights to be named after President Donald J. Trump.

Israeli Prime Minister Benjamin Netanyahu and his Cabinet convened Sunday at the site to celebrate the establishment of a new settlement named for President Trump called Ramat Trump — or “Trump Heights.”

Even as the celebration was being held, critics contended it can’t happen before the September elections, the Times of Israel reported.

“Anyone who reads the fine print in this ‘historic’ decision will understand that this is nothing more than a nonbinding, fake policy,” Blue and White MK Zvi Hauser said. “There is no budgeting, no planning, no location for a settlement, and there is no binding decision to implement the project. But at least they insisted on a name for the settlement.”

“Let’s hope President Trump does not know that his name is being used for this public relations exercise,” Hauser, a Netanyahu Cabinet secretary-turned-political rival, said in a press release, according to the Times of Israel.

“The prime minister must decide whether he really wants to establish a new settlement and deepen our roots in the Golan Heights or whether he is content with creating a virtual reality for the purposes of a photo op.”

Israeli officials said they hoped Ramat Trump, first built in the 1980s, will attract a wave of people to what is currently little more than an isolated outpost with just 10 residents.

Netanyahu said in April that he wanted to name a new settlement in the Golan Heights after Trump out of gratitude for the White House's recognition of Israeli sovereignty over the territory.

Trump officially recognized Israeli sovereignty over the territory it captured from Syria in the 1967 Mideast War weeks earlier.

An estimated 20,000 Israelis live in Golan Heights settlements, which most of the international community considers illegal, the Associated Press reported.