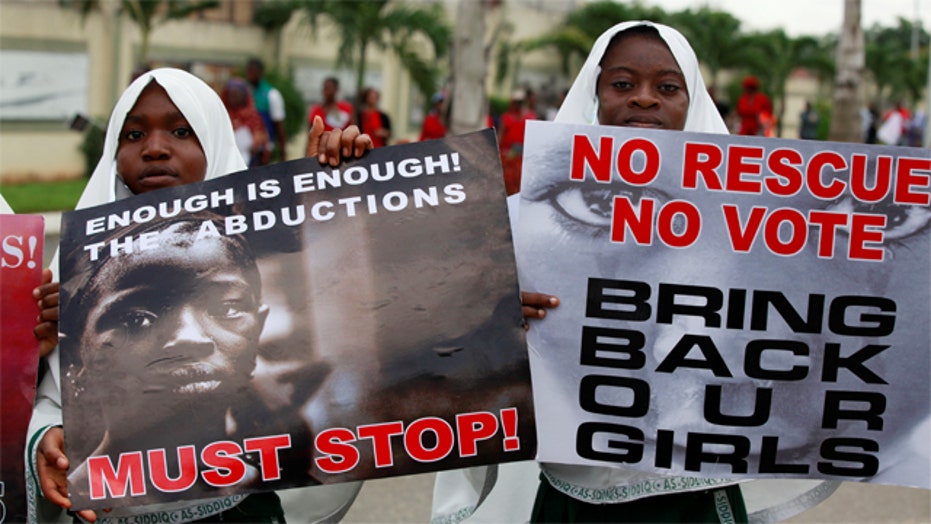 House to hold hearing on US response to Nigeria kidnapping

Islamic extremists blew up a bridge, killed an unknown number of people and abducted the wife and two children of a retired police officer in northeast Nigeria, residents said Saturday amid mounting condemnation by Muslims of the Nigerian terrorist network that abducted more than 300 schoolgirls nearly a month ago.

News of Friday night's attack came as international efforts to help rescue the 276 missing girls got under way.

A team of French experts arrived Saturday in Nigeria, said an official in President Francois Hollande's office in Paris. He said they are expert in collecting intelligence from technical and human sources and in image analysis.

British security experts arrived Friday to join Nigerian and American forces, and Britain said its aim is not only to help in the crisis over the girls but to defeat Nigeria's homegrown Boko Haram terrorist network.

International outrage at the prolonged failure of Nigeria's military to rescue the girls was joined Saturday by U.S. first lady Michelle Obama. In a radio address on the eve of the Sunday honoring mothers in the United States she said she and President Barack Obama are "outraged and heartbroken" over the April 15 mass abduction.

"In these girls, Barack and I see our own daughters," Mrs. Obama said, referring to Malia, 15, and Sasha, 12. "We see their hopes, their dreams and we can only imagine the anguish their parents are feeling right now."

Rev. Enoch Mark described his despair and anger at the military for not finding his two abducted daughters. "For a good 11 days, our daughters were sitting in one place," he told The Associated Press. "They camped them near Chibok (the town from which they were abducted), not more than 30 kilometers, and no help in hand."

A well-known Nigerian Islamic scholar meanwhile warned that having foreign soldiers on Nigerian soil could escalate the conflict and draw foreign extremists to the West African nation. Ahmed Mahmud-Gumi, speaking in northern Kaduna city on Friday, said it "may trigger waves of terrorism never seen before."

"Foreign terrorists are eager to engage foreign forces, making Nigeria just another battle ground" like Afghanistan and Iraq, he said.

Former Nigerian military ruler Gen. Ibrahim Babangida urged the country's Muslims to rise up against the extremists sullying the name of Islam.

"Islam enjoins you to live peacefully with fellow human beings. ... Therefore, anybody who will come and smear our name, all Muslims should kick against that. Muslims should also do everything possible to stop this continued blackmail against the religion of Islam," he said in an interview Saturday with the BBC Hausa Service.

From Doha, Qatar, the International Union for Muslim Scholars condemned "the terrible crimes offensive to Islam" and said the actions of Boko Haram "are very far from Islamic teachings."

It called on Boko Haram to immediately release the girls, saying that threats to sell them into slavery are against Islamic Shariah law. Boko Haram has said it wants to enforce Shariah law across the entire country though Nigeria's population of 170 million is divided almost equally between Christians and Muslims. Shariah is pursued to varying degrees in most northern states.

The Nigerian extremists also were condemned in online conversations at jihadi forums. "There is no justification for kidnapping girls and children," one member wrote. "Prophet Muhammed prohibited killing women or even scaring them. Do those who carried out this act know that they are defying God's orders?"

In the Saudi city of Jiddah, the 56-country Organization of Islamic Cooperation, the world's largest bloc of Islamic countries, said it is mobilizing for a meeting next week that will focus on groups like Boko Haram that are part of "the growing phenomenon of dangerous extremist groups who hijacked Islam and are committing crimes in the name of religion."

Its secretary-general Iyad Madani said Saturday that the mass abduction was "inhumane and barbaric." In an interview with The Associated Press, he called Boko Haram fighters "simply criminal outlaws."

In Nigeria's northeast war zone, local government chairman Abawu James Watharda said no one could count the dead because 3,000 survivors have fled Friday night's attack on the town of Liman Kara.

Fleeing residents say the insurgents blew up the bridge that links the states of Adamawa and Borno that are under a military state of emergency to halt the Islamic uprising. That would cut off any military vehicles attempting a hot pursuit.

On Monday, militants destroyed a bridge linking Nigeria to neighboring Chad, where it has hideouts in mountain caves.

There were no details about the latest children to be abducted. The Boko Haram terrorist network has said that its abductions of family members of Nigerian officials is a tit-for-tat measure since Nigeria's military and police often detain the spouses and children of wanted suspects, holding them hostage until the suspect surrenders.

Boko Haram has staged many attacks in northeastern Nigeria over the years, a campaign of bombings and massacres that has intensified despite a strong military offensive.  Since May 2013 there has been a state of emergency in three northeastern Nigerian states.