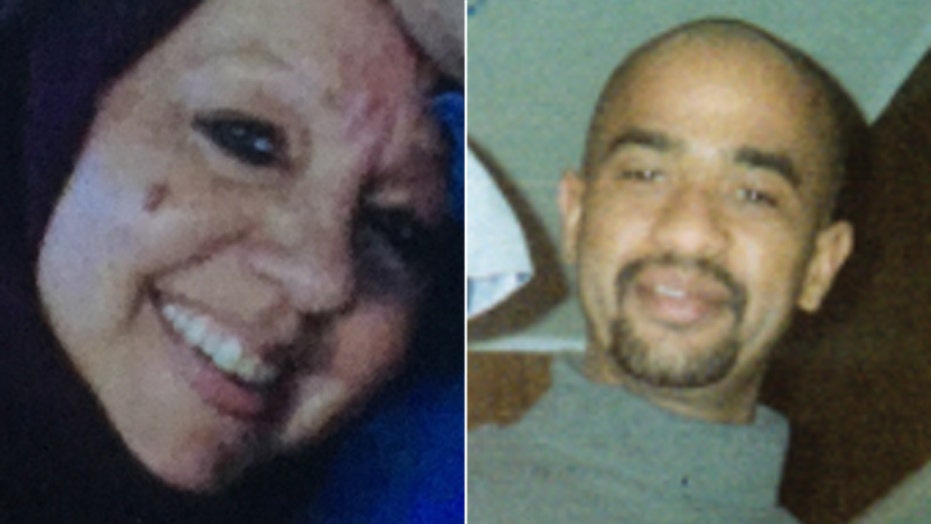 A Michigan woman wanted in the 2002 death of her husband, whose remains were so badly burned they weren’t identified for more than a decade, was arrested at a hotel in Italy after a multinational search, local police said.

Beverly McCallum, 59, of Charlotte, Mich., located about 100 miles west of Detroit, was arrested by Rome police overnight Thursday after she and her teenage son checked into the Il Papillo hotel on the northwestern outskirt of the Italian capital.

Italian hotels are required to register guests in an online system linked to a police database. The process revealed McCallum had an Interpol (International Criminal Police Organization) warrant listing her for extradition. An unidentified police spokeswoman and hotel staff both confirmed her arrest to the Associated Press.

Beverly McCallum, 59, (left) was arrested in the 2002 death of her husband Robert Caraballo (right) after checking into a hotel in Italy. (Eaton County Sheriff's Department)

“We have seen media reports of a U.S. citizen arrested in Rome. Whenever a U.S. citizen is arrested overseas, we stand ready to provide all appropriate consular services. Due to privacy considerations, we have no further comment at this time,” a U.S. State Department spokesperson said in a statement to Fox News.

U.S. authorities had been seeking to extradite McCallum from Pakistan, where she was believed to be living, to stand trial in the slaying of her husband, Robert Caraballo.

The man was beaten and suffocated in 2002. His body was not identified by police until 2015, after they received an anonymous tip – some 13 years after his charred remains were found inside a metal footlocker abandoned in a blueberry patch in Ottawa County in western Michigan.

A view of the hotel where an American woman wanted in the 2002 death of her husband was arrested in Rome, Thursday, Feb. 13, 2020. (AP Photo/Paolo Santalucia)

Dineane Ducharme, McCallum's adult daughter, allegedly told investigators her mother moved to Pasadena, Texas shortly after the 2002 murder. She later met a man online from Pakistan and moved there when she received word the investigation into Caraballo’s death was progressing, investigators said.

She is being held at Rome's Rebibbia prison. Her teenage son was placed in the custody of Rome social services, the AP reported.

Authorities announced murder charges against McCallum, Ducharme, and another man, Christopher McMillan, of Grand Rapids, last year. The three were also charged with conspiracy, and disinterment and mutilation of a body.

McMillan pleaded guilty last October to second-degree murder. He had been expected to testify against the other two. Ducharme was also in custody.

McMillan, a friend of Ducharme, told investigators the slaying was planned and a “test run” was performed before killing Caraballo, Eaton County sheriff’s Detective James Maltby testified at a hearing last year.

McMillan allegedly told investigators that McCallum pushed her husband down the basement stairs of a home, then beat him with at least one hammer in an attack so vicious that it got lodged in Caraballo’s skull, Maltby testified, according to the Lansing State Journal.

McCallum then wrapped a plastic bag around the head of the still-breathing Caraballo, Maltby testified. Ducharme was 21 at the time of the slaying. Maltby testified that one of McCallum’s children said the mother had told her she killed Caraballo in self-defense.