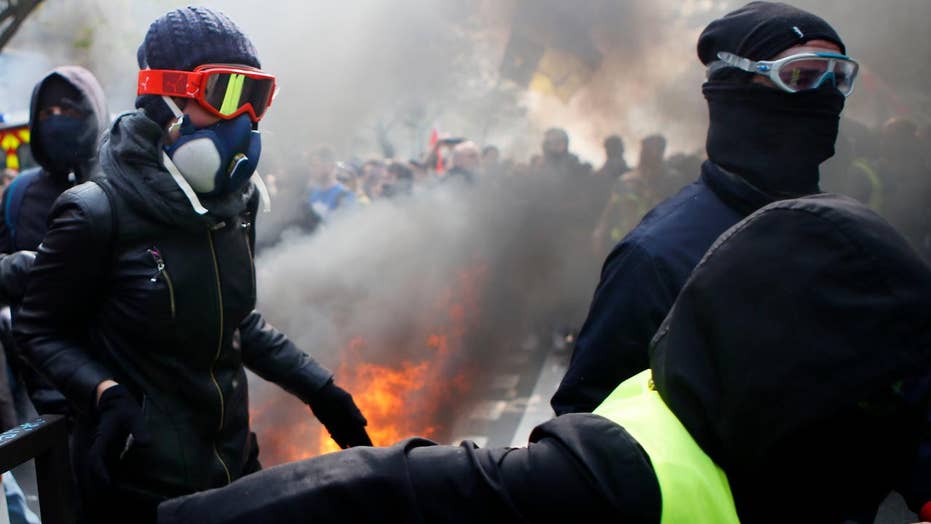 Groups of hooded, black-clad protesters threw rocks and other objects at police officers, smashed up vehicles and set trash cans fires as the annual May Day rallies in the French capital quickly took a violent turn on Wednesday.

The stone-throwing protesters shouting anti-police slogans – who had mixed with other demonstrators wearing yellow vests or waving union flags – were met with repeated tear gas from cops trying to control the crowd gathering near Paris’ Montparnasse train station.

An activist kicks away a tear gas canister during a May Day demonstration in Paris. (AP Photo/Francois Mori)

It wasn’t immediately clear how many people were injured. At least two bandaged-up men with a head wound were helped away from the scene by paramedics, while firefighters assisted a woman in a wheelchair.

More confrontations broke out at the end of the march route near the Palace d’Italie in southeast Paris as police tried to disperse stragglers.

About 165 arrested have been made under the tight security for the traditional May Day union marches in Paris alone. French authorities had warned of “radical activists” joining the Paris demonstrations to renew scenes of violence that have marked previous yellow vest protests and May Day rallies in the past two years.

Tear gas canisters lie on the ground during a May Day demonstration in Paris, Wednesday, May 1, 2019. Brief scuffles between police and protesters have broken out in Paris as thousands of people gather for May Day rallies under tight security measures. Police used tear gas to control the crowd gathering near Paris' Montparnasse train station. (AP Photo/Francois Mori)

The French Interior Ministry said about 16,000 people marched in Paris and more than 151,000 in May Day rallies across the country.

More than 7,400 police officers were deployed in Paris because of the May Day events. The Paris police department said there were 288 arrests.

French authorities had warned of “radical activists” joining the Paris demonstrations to renew scenes of violence that have marked previous yellow vest protests and May Day rallies in the past two years.

Meanwhile, elsewhere in Europe, police briefly clashed with protesters in Goteborg, Sweden's second-largest city, and in Copenhagen, the capital of Denmark, as May Day rallies were being held.

A man, his face covered in blood, is assisted as he walks away during a May Day demonstration in Paris. (AP Photo/Francois Mori)

In Sweden, protesters threw cobblestones and fireworks at police as they were being kept away from reaching a rally by a neo-Nazi movement that had received official permission to march.

In Copenhagen, helmeted police circled their vans around a group of hooded people in black who were shouting anti-police slogans, trying to keep them away from other May Day demonstrations.

A handful of people were detained in both countries.

An activist group said that more than 100 people were detained across Russia, with over half taking place in the country’s second-largest city for participating in an unsanctioned political protest on May Day.

The OVD-Info group that monitors detentions of political activists said that at least 68 people were detained in St. Petersburg on Wednesday. Most of them are supporters of opposition leader Alexei Navalny. Two people reported injuries.

Authorities said about 100,000 people took part in a May Day rally in central Moscow organized by Kremlin-friendly trade unions on Red Square. Over the years, the May Day in Russia has transformed from the occasion for rallies for workers' rights to an official event carefully orchestrated by Kremlin-controlled groups.

Opposition activists, however, often try to use the May Day to promote their agenda.

Demonstrators confront police officers as scuffles broke out during a May Day rally in Turin, Italy, Wednesday, May 1, 2019. (Alessandro Di Marco/ANSA via AP)

Demonstrators in Turin, Italy scuffled with police in riot gear as they attempted to march through the city streets.

The Italian news agency ANSA said two protesters and a police officer were injured when police blocked a demonstration to oppose construction of a high-speed rail tunnel between France and Italy.

Torino city councilor Damiano Carretto said on Facebook he was hit on the head and hand with a police truncheon.

In the Greek capital of Athens, hundreds of people gathered for three separate rallies and marches to parliament organized by rival unions and left-wing groups. The city was left without public buses, trolley bus, and urban rail services all day as part of a 24-hour transport union strike, although the city’s metro trains were running most of the day.

Protesters chant slogans during a rally organized by the Communist-affiliated PAME labor union outside the Greek parliament, in central Athens. (AP Photo/Petros Giannakouris)

Authorities in Turkey detained demonstrators who tried to march toward Istanbul’s symbolic Taksim Square after it was declared off-limits to May Day celebrations.

Police allowed only small groups of labor union representatives to lay wreaths at a monument in the square, which holds symbolic value for Turkey’s labor movement. In 1977, 34 people were killed there during a May Day event when shots were fired into the crowd from a nearby building.

The tradition of May Day marches for workers' rights began in the United States in the 1880s. It quickly spread to other countries at a time when industrialization pitted poorly paid employees who had few protections and little power against increasingly dominant factory employers and landowners.

Opposition leader Juan Guaidó speaks to supporters in Caracas, Venezuela, Wednesday, May 1, 2019. Thousands gathered to demand President Nicolas Maduro's ouster in what could be another critical day in the nation's struggle between a widely detested socialist government and an opposition backed by powerful allies like the United States but unable to secure the loyalty of key factions like the military. (AP Photo/Fernando Llano)

In Venezuela, opposition leader Juan Guaido has used the traditional May Day rally to call for a massive, widespread anti-government demonstration in an effort to oust disputed socialist leader Nicolas Maduro. The call for the “largest march” in the country’s history comes a day after fierce protests between his supporters and the Venezuelan military.

In South Africa, an opposition party is using May Day to rally voters a week before the country’s national election.

Supporters of the Economic Freedom Fighters (EFF) party, hold up an election poster of leader Julius Malema during a May Day Rally in Alexandra Township, Johannesburg, Wednesday, May 1, 2019. (AP Photo/Mujahid Safodien)

Economic Freedom Fighters members, wearing their signature red shirts and berets, gathered at a stadium in Johannesburg to cheer in support of populist stances that have put pressure on the ruling African National Congress to address issues like economic inequality and land reform.

A South Korean major umbrella trade union has issued a joint statement with a North Korean workers’ organization calling for the Koreas to push ahead with engagement commitments made during a series of inter-Korean summits last year.

Many of the plans agreed between the Koreas, including joint economic projects, have been held back by a lack of progress in nuclear negotiations between Washington and Pyongyang.

In Sri Lanka, major political parties called off the traditional May Day rallies due to security concerns following the Easter bombings, which killed 253 people and were claimed by militants linked to the Islamic State group.