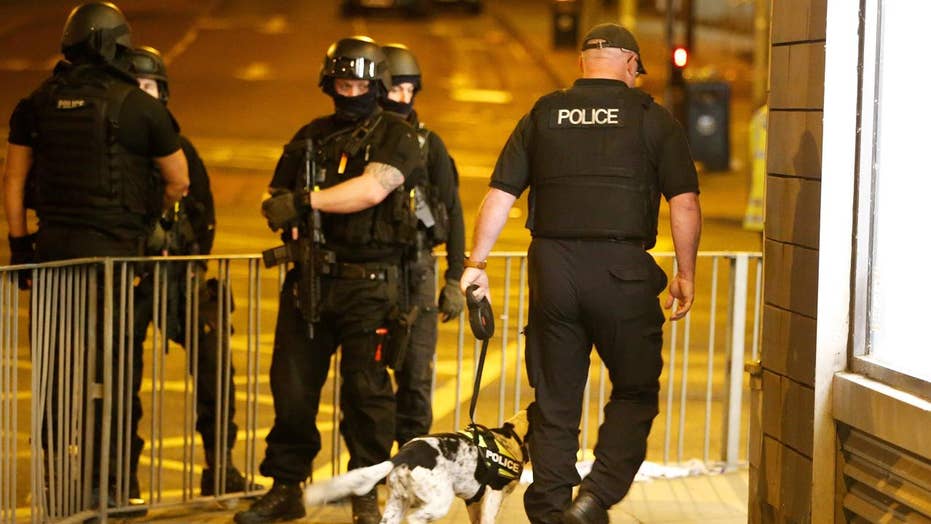 22 killed, 59 hurt in bombing at concert in Manchester

Greg Palkot has the latest updates about the attack

MANCHESTER, England – I have covered a lot of terror attacks in my time, but the atrocity last night in Manchester has to rank as one of the worst. Not because of the number dead or the style of the attack. Instead, it was because of the nature of the victims.

Police at the scene of the terror attack at the Manchester Arena in Britain. (Greg Palkot/Fox News)

Children, teenagers, young girls. ‎All out to see one of their favorite stars, Ariane Grande. They ended up in a catastrophe.

I spoke with one young woman. Her friends told her they stepped out of the concert for a moment. When they tried to re-enter the hall, other youngsters emerged, covered with blood.

The usually stoic British Prime Minister Theresa May was rightfully outraged in a statement on Tuesday. She said the attack stood out for its "cowardice." And that it was done for "maximum carnage."

The scene at the Manchester Arena after a deadly explosion during the Ariana Grande concert. (Greg Palkot/Fox News)

The pictures of the victims are just now emerging. A sweet 8-year-old dead. Another 18-year-old killed. She was just starting her new life.

And amazingly, hours after the Monday night attack, parents and young people were still trying to reconnect. Or hoping they could find each other while fearing the worst.

As for the apparent suicide bomber behind the attack, ISIS said he was one of its "soldiers." The police say they know who he was. At least one connected with him has been arrested.

But the only important thing to know about him is with blood-thirsty timing he had to have known what he was going to do. His explosive detonated just as the young crowds poured out of the hall.

The scene at the Manchester Arena after a deadly explosion during the Ariana Grande concert. (Greg Palkot//Fox News)

One nice thing coming out of the attack: Acts of kindness by local Manchester residents for "Bobbies" and other law enforcement officers working around the clock to investigate this horror. Volunteers bringing coffee and sandwiches to over 400 men and women working through the night.

Small acts of kindness set against an act of depraved horror.