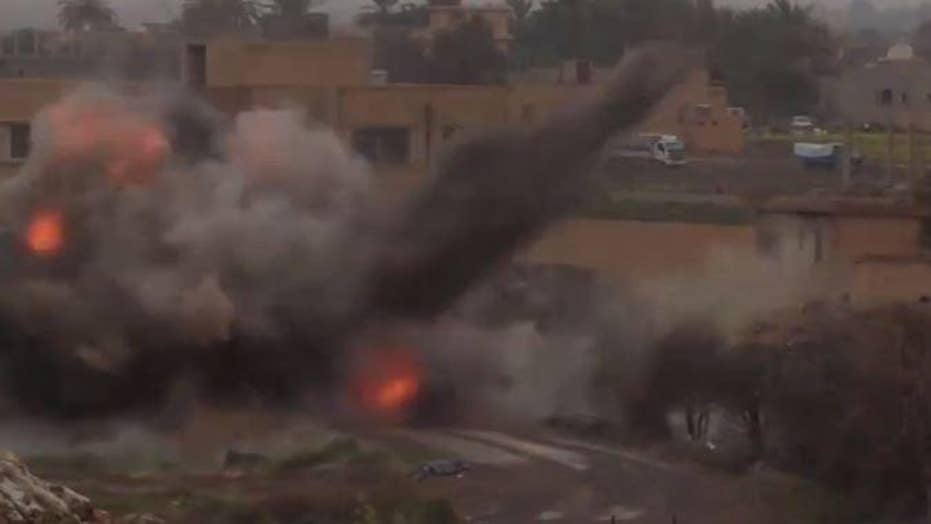 Sexual abuse of boys and men is emerging as one of the most under-reported weapons of war and Fox News is speaking to victims from Syria's civil war.

It is one of the darkest, most secretive weapons used in war. But slowly, the widespread nature of the sexual abuse of boys and men is being cast under anguished limelight as survivors and activists seek more awareness and perpetrator accountability.

“I didn’t see him because they blindfolded us before the interrogation, but I heard the officers calling for Abo Somar to torture me,” Marwan al Qarout, 38, told Fox News of his abuser. “He hit me on my genitals and threatened me with cutting it off so I could not ‘re-produce terrorists.’ After an hour of hitting me, another [torturer] came. He stuck a rifle up my bottom.”

Qarout, a pseudonym, is an activist who says he was peacefully demonstrating against the Syrian dictatorship led by Bashar al-Assad, when he was subsequently arrested by an Air Force intelligence branch on April 23, 2014 in his hometown of Homs City. He spent five months behind bars – months marked by fear and the kind of abuse he lives over and over in his mind.

“I haven’t survived it,” he lamented, acknowledging that while he wants the perpetrators to be held accountable and punished by the international community, he has not sought any professional help and only a few close family members know about what he endured.

“People who know sympathize with me,” Qarout continued. “But all of us, all detainees have suffered from this problem in one way or another.”

And for fellow Syrian activist Khalid Terkawi, the screams of his fellow male detainees still echo in the walls of his mind.

“First, there was a woman who had iron sticks inside her genitals. Then the men had wooden sticks shoved in their ass whenever the interrogator wanted to torture,” Terkawi, 34, who is now based in Istanbul but spent two different stints in detention for protesting the government, recalled. “But the victim cannot speak about this in our society.”

Throughout the eight-year civil war that has rubbled Syria and left more than half a million dead, sexual violence against women in detention has emerged as one of the horrific methods of torture at the hands of government forces. However, only now is it coming to light just how extensively male sexual violence has – and continues to be – deployed against male detainees.

The remnants of an ISIS prison in Raqqa, Syria (Fox News/Hollie McKay)

A report released this month by Syrian rights organization Lawyers and Doctors for Human Rights documented 138 accounts of male detainee abuse, of which more than 40 percent detailed occurrences of sexual abuse ranging from forced nudity and sterilization to the mutilation of genitals and rape, sometimes resulting in false confessions.

But the issue is hardly confined to the Syrian conflict.

“The scale of sexual violence against young males and men in conflict and near-conflict spaces represents a global epidemic that knows no borders,” said Ian Bradbury, CEO of 1st NAEF, a non-profit focused on humanitarian aid and assisting victims of all gender-based violence. “It has been observed prominently in Afghanistan, Iraq, Philippines, Indonesia, Syria, Nigeria, Libya, Sudan and other conflict zones. And it is not limited to these areas alone.”

Indeed, the Qaddafi regime was accused of male rape as a tool of war during the 2011 revolution in Libya, with the systematic tactic used by several different factions in the severed nation in the ensuing years. Videos and testimony collected in recent years by a Tunis-based advocacy group painted a painful picture of victims having been forced to rape other male detainees behind bars, as well as men being sodomized by objects such as rockets and broom handles.

Retired U.S. Air Force Lt. Col. Rudolph Atallah, now chief executive officer of White Mountain Research, and former Africa Counterterrorism in the Office of the Secretary of Defense, also recalled hushed accounts of male sexual abuse throughout the conflicts in Bosnia and eastern Congo – pointing out that it also happens in conflict-riddled parts of Africa under the auspice of witch doctor creed that sometimes claims raping young boys can bring about cures for major diseases such as HIV.

“It breaks the victims down so much, it is often impossible for them to talk openly,” he said. “There is so much stigma, so much taboo. For the perpetrator, it’s about dominance and control that destroy a victim internally, make them feel no longer male.”

Moreover, a report released by Amnesty International earlier this month, following a detailed investigation, illuminated that boys as young as 8 have been raped in the Yemeni city of Ta’iz. Many of the suspected perpetrators, according to Amnesty, belong to militias aligned with the Saudi Arabia and UAE-led Coalition.

Two medical reports viewed by Amnesty indicated signs of anus lesions on two of the survivors, which was consistent with their testimony.

In one case, a 16-year-old boy recalled being raped in December 2018 by an Islahi-affiliated militiaman in Ta’iz, describing how he was beaten with a rifle and pushed to the ground. He was unable to sit or go to the bathroom for days, his complexion drained and yellow, his psychological state marked by sheer fright. His mother reported the incident to the Ta’iz Criminal Investigations Department who issued an order for a forensic medical exam. Yet according to the investigation, the doctor too was under militia control and refused, the hospital wanted money that the mother was not able to produce, and the report was never finished.

“Considering all of the problems the international community is trying to tackle in Yemen, I don’t think anything is really being done,” noted Philippe Nassif, Amnesty’s advocacy director for the Middle East and North Africa, with regards to the issue of sexual abuse amid a war that has left more than 11 million people starving and more than 100,000 dead. “This is an issue that has always existed in Yemen, but it has only gotten worse because of the conflict. We know it is taboo, but it is being weaponized. That demands the international community face it.”

Earlier this month amid the backdrop of citizen outrage, Yemen’s government was prompted to establish a committee to investigate the cold-blooded killing of Raafat Danbaa in the port city of Aden, who was slain seemingly in retaliation for testifying against militiamen accused of raping a 7-year-old boy amid the protracted conflict.

Accusations of sexual abuse also plague the Iran-backed Houthi rebels on the other side of the conflict, who continue to control pockets of northern Yemen and the capital city Sana’a. Psychologists treating former child soldiers forced to fight for the Houthis told Fox News last year that at least 50 to 60 percent of the boys ages 12 to 15 had experienced some form of sexual abuse at the behest of their superiors.

And while females undoubtedly constitute the overwhelming majority of sexual violence in conflict overall, researchers believe that in some conflict-riddled countries, men make up more than a quarter of the survivors. The UN notes that sexual violence against males in armed conflict is common, but no accurate statistics are available. The sense of disgrace that pervades the notion of male sexual abuse means that not only is it rarely even acknowledged, but little help is sought out or even offered for the psychological wounds.

“Male victims suffer in silence. We have a care gap – young male victims of sexual violence in conflict are not being recognized as victims, let alone being treated as such,” Bradbury said. “The risks associated with not addressing this care gap is likely to be an increased probability of failed peace processes, due to the increased likelihood that these victims could go on to repeat cycles of violence if they remain untreated.”

FILE - In this Wednesday, Feb. 7, 2018 file photo, former child soldiers stand in line waiting to be registered with UNICEF to receive a release package, in Yambio, South Sudan. In an interview with The Associated Press in civil war-torn South Sudan, Romeo Dallaire, the former commander of the failed U.N. peacekeeping mission during the Rwandan genocide, says the current approach to combatting child soldier recruitment is not "sufficient". (AP Photo/Sam Mednick, File)

And in some countries where homosexuality is outlawed, survivors are even at risk of being arrested by law enforcement – under the presumption of being gay – should their trauma ever be brought to light. Historically, medical and legal personnel have lacked the training and preparation needed to address or identify male victims, contributing to the silent nature of the crime – a critical gap that individuals such as Karen Naimer, Deputy Director of Programs and Director of the Program on Sexual Violence in Conflict Zones for Physicians for Human Rights, is trying to mend.

“We work with local clinics, doctors, nurses, police officers, lawyers and judges to help them understand that these are very legitimate experiences and to help improve not only access to care and treatment; but to allow the survivor to come forward with a dignified experience,” Naimer said.

A prominent portion of PHR’s work in recent times has been centered in the northern swaths of Iraq, in which thousands from the Yazidi community are recovering from being brutally targeted as sex slaves under ISIS occupation. While the vast number of survivors are female, Naimer said that, anecdotally speaking, there are also male survivors of sexual abuse from under the ISIS reign.

“We are seeing strides. We are seeing a shift in attitudes and behaviors,” she added, referring to the openness and willingness of war-torn communities to treat male sexual assault victims during recent years. “But it is going to take a lot more time, and a lot of commitment and investment to really see the change that is needed.”