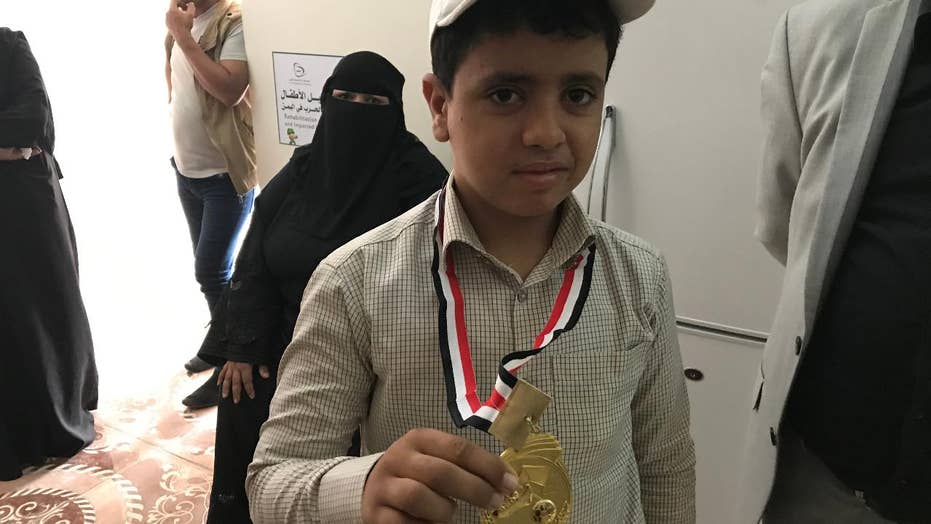 Houthi forces in Yemen have abducted and violently forced young boys to undertake various military tasks. Many of the child soldiers are believed to have been sexually assaulted. Now a program is in motion to help the ones who have escaped heal from the physical and mental scars.

MA’RIB, Yemen – Two dozen boys sit quietly in a small classroom in  crisp uniforms, their nation’s flag draped around their necks. Colorful drawings decorate the walls, yet a sense of deep darkness punctuates the air: These boys have been heavily traumatized by Yemen’s ongoing civil war, and almost all of the students were forcibly recruited as child soldiers.

At least half of the child soldiers -- who all appear far smaller and younger than their 12 to 15 years -- are believed to have been victims of sexual assault while under control of the militia, experts say.

“The most difficult thing is helping those who come from the battlefields having been sexually abused. It takes a long time to help,” Dr. Mahyob Almechlatky, a psychiatrist at the Rehabilitation of Children Recruited and Impacted by War in Yemen Project in Ma’rib, Yemen, told Fox News. “Sadly, it’s very common. A big amount of the students have faced this and we are trying to take away the shame.”

United Nations warns of looming starvation and the largest famine the world has seen in decades; Gillian Turner has the story for 'Special Report.'

The rehabilitation center, with a staff 25 health professionals, is now trying to heal those silent scars. Financed by the King Salman (KS) Humanitarian Aid and Relief Center, the project aims at rehabilitating the children and reintegrating them into society and back to school.

The intensive approach to “get out the negative energy” includes everything from arts and crafts, to sports, counseling and hypnosis.

Yemen’s child soldiers are the country’s ‘lost boys,’ facing a long road of rehab after sexual abuse at the front lines.

“Sexual abuse is very common, maybe 50 to 60 percent,” said Mohammad Mobarak, the project manager for the school and the KS Relief Center. “This conflict has touched too many young lives, and we just want to give them the opportunity to be a child again. They did not choose to be a part of this.”

This class, three days away from graduation, will soon be added to the list of some 180 boys who have already gone through the live-in, one-month rehabilitation program since its inception in August last year.

And every child has their own heart-wrenching story, each more tragic than the next.

Khalil, 14, recalls how he was playing outside his Amran home with a friend when a man drove by and offered them a ride. They ended up at a Houthi militia base. For three months Khalil was ordered to perform various military tasks such as filling sandbags.

“If I was too slow,” Khalil whispered, his face now lopsided, his mouth still swollen, “they beat me.”

Omar Abdullah, 14, also was swept up from a playground outside his local Amran mosque last year and for two months was abused. If he refused to undertake the commander’s orders, he was pummeled with the barrel of an AK-47 and starved into submission.

Around a year ago, one of the “Houthi supervisors” offered to sneak Omar out of the military center in exchange for the equivalent of $100.

“They put me between the corpses, the dead fighters, and for ten hours I could not move,” Omar remembered, fleshing out that fearful drive with vivid detail. “Then when we arrived the supervisor said he would blow up my house if I did not give him the money. My family had no money, so I begged my neighbor who helped.”

And for Ahmed, 15, who still speaks in staccato as his eyes stare far off into the distance, he too was offered a ride home while herding his goats on the outskirts of Ma’rib. Before he could interject, he was hurled inside and his four-month hell with a Houthi militia began.

“They gave us the wrong information; they told us we were fighting ISIS,” Ahmed said. “But when we’re fighting, my friend, who was a child like me, was killed next to me and I panicked.”

A local army unit attached to the Yemeni forces surrendered, and took him to the sheikh of his local tribe for safe passage home.

Other children have been coerced into committing atrocities against their fellow child recruits -- such as stabbing them to death.

The program also comprises a three month follow-up protocol to ensure the lost boys return to school, as well as a parental component.

“We give courses to educate the parents on awareness and legal responsibilities to protect their children, to make sure they don’t end up with fighters and that once they graduate here they go back to school,” Mobarak explained.

'They can't scare me anymore.'

The center’s expert staff say they don’t ask which militia or military outfit the boys were abducted into, but the large majority are thought to have been abducted by Houthi factions who have controlled the capital Sana’a since September 2014. In March 2015, this prompted a neighboring Saudi Arabia-led coalition to intervene with a deadly bombing campaign, spiraling the country into a protracted state of war.

And since then, the United Nations has verified more than 2,000 cases of child soldier recruitment. At least 6,000 minors are still thought today to be fighting on both sides, with Houthis bearing most of the blame for violating this aspect of international law.

Outside the center, the markings of mortar rounds mottle the walls, and charred glass surrounds a prominent dip in the earth. The rehab facility has been targeted by unknown actors three times since it started eleven months ago, with the most recent assault on the night of May 2.