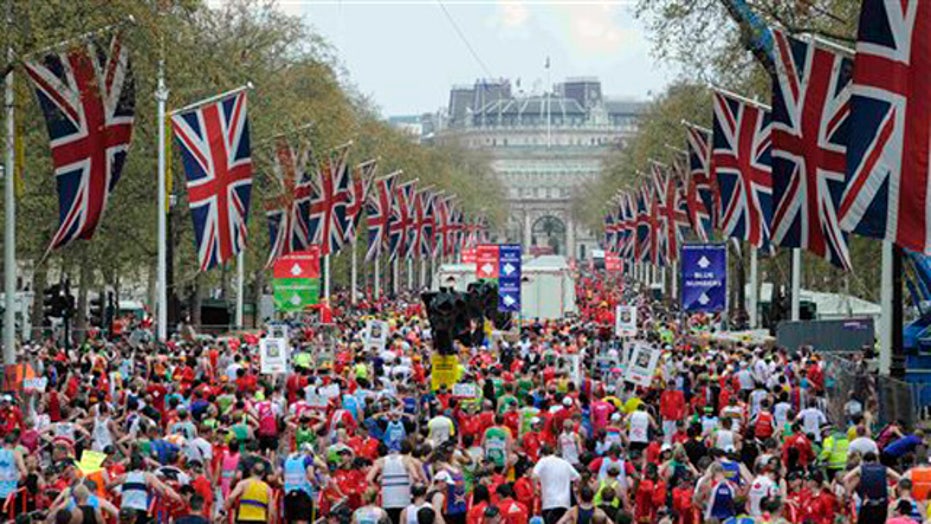 London beefs up security ahead of weekend's marathon

Determined to show solidarity with Boston, the London Marathon will go forward as planned Sunday with a race that will be watched by about 1 million spectators and take runners past some of the city's most revered landmarks.

The British capital has long been a target for terrorists, and concerns have only intensified after Monday's harrowing scenes at the Boston Marathon. Two bombs killed three people and injured more than 170.

After high-level talks with police and authorities, organizers on Tuesday confirmed that the London Marathon will proceed while acknowledging that a race of more than 26 miles that traverses a city cannot be entirely without risk.

"One of the great things about these marathons is that they are free and available to the public -- that's why we have hundreds of thousands of people come out and watch them," Nick Bitel, chief executive of the London Marathon, told The Associated Press by phone. "I can't see how that is going to change.

"It's part of the whole ethos of what a mass-participation marathon is about. What one has to do is make appropriate and reasonable security measures in light of the threats and that's what we'll be doing on Sunday."

Prince Harry, the patron of the London Marathon Charitable Trust, will attend the race and make the presentations to the winners from the field of 36,550 runners.

"We won't be cowered by this sort of behavior," said British Sports Minister Hugh Robertson, who hailed the country's security forces as "the best anywhere in the world."

"The best way for us to react is to push ahead with the marathon on Sunday, to get people on the streets and to celebrate it as we always do in London. These are balance of judgments but we are absolutely confident here that we can keep the event safe and secure. I think this is one of those incidents where the best way to show solidarity with Boston is to continue and send a very clear message to those responsible."

Mo Farah, Britain's double Olympic long-distance champion, will be running a half-marathon while the three medalists from the men's marathon at the London Games are also among the entries.

There have been no high-profile withdrawals so far, and Bitel told the AP that the agents of the top competitors have been contacted, reassured and "kept comfortable with what is happening."

"There's rather intense activity going on to ensure the race is safe and is carried off with the usual aplomb," said Ed Warner, chairman of UK Athletics. "The decision at the moment is to go ahead with the race and I'm sure it is the right decision. They will cope very well with the increased demands placed on them."

London is one of six cities in the world marathon series along with Tokyo, Boston, Berlin, Chicago and New York.

Belgrade, Serbia, is among other cities staging marathons this weekend. Organizer Dejan Nikolic is confident the race will be a "beautiful running festival."

"We will do our best so that this year the security level is even higher," Nikolic said.

In 2005, suicide attacks on the public transit system in the British capital killed 52 people. London and mainland Britain also face a moderate threat from Northern Ireland-related terrorism, according to the government. A massive security operation was put in place last summer to protect the London Olympics.

This year's Boat Race between English universities Oxford and Cambridge went ahead amid tightened security after a protester jumped into the River Thames last year and narrowly avoided being hit by the oars of the two crews. Royal Marines were stationed along the length of the 4 1/4-mile course.

Police already were preparing a major security operation in London for Wednesday's ceremonial funeral for former Prime Minister Margaret Thatcher, an event at St. Paul's Cathedral that will be attended by Queen Elizabeth II and dignitaries. The plans call for a procession through the streets of London, with Thatcher's flag-draped coffin to be carried on a horse-drawn carriage.

The funeral's security plans are expected to be reviewed in light of the bombings at the Boston Marathon.

"I would stress that at this stage, there's been no announcement that this is terrorism-related," Metropolitan Police commander Christine Jones said. "We are working with London Marathon to make sure we have all the tactics in place that we need."