BERLIN – Germany's interior minister and head of the Christian Social Union party reportedly offered his resignation from both posts Sunday night rather than back down from his stance against Chancellor Angela Merkel's migration policies, as the crisis within her governing coalition came to a head.

The dpa news agency, citing information from unidentified participants, reported that a nearly eight-hour meeting of the CSU in Munich was put on hold after Interior Minister Horst Seehofer made his offer. Dpa reported that Alexander Dobrindt, the leader of the CSU in parliament, told others Seehofer could not be allowed to resign.

If Seehofer does step down, it was not immediately clear what effect the move would have on a three-week impasse between Merkel and her Bavarian-only CSU partners, which has centered on his resolve to turn away some types of asylum-seekers at Germany's borders.

Merkel has insisted on Europe-wide solutions to handling the waves of desperate foreigners trying to reach the continent and the standoff could spell the end of her fourth government.

Merkel insisted earlier Sunday that a plan to regulate immigration European Union leaders approved Friday and agreements she hashed out with several key countries would accomplish what Seehofer seeks.

"The sum total of everything we have agreed upon has the same effect" as what Seehofer has demanded, Merkel said in an interview with ZDF television. "That is my personal opinion. The CSU must naturally decide that for itself."

But dpa reported that Seehofer told the forum he thinks the measures do not adequately accomplish his goals. 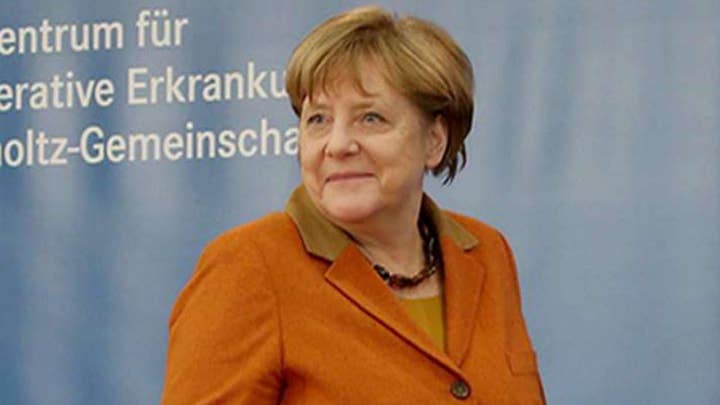 As the CSU met in Munich, Merkel's Christian Democrats met in Berlin to discuss what comes next.

Seehofer, whose party faces a state election in the fall, has threatened to turn away at the borders migrants whose asylum requests Germany already rejected or who already sought asylum elsewhere in Europe.

Merkel has rejected that approach, saying Germany needs to address migration more broadly to preserve EU unity. If Seehofer goes ahead with his policies, the dispute could end the decades-old conservative alliance between the CSU and Merkel's CDU.

Merkel and Seehofer met Saturday night for two hours. The German leader would not comment Sunday on the outcome of the talks. She also would not speculate on whether she might fire him or if the issue could lead to a government confidence vote in parliament.

She said she would wait and see what the leadership of the two parties decides "and then we will see what comes next, step for step."

Merkel reiterated her position that if countries start turning migrants away at national borders unilaterally, it would cause neighboring countries to close their borders and jeopardize the border-free movement the Europe's so-called Schengen-zone.

She said the decision by leaders of European Union countries Friday to strengthen the 28-nation bloc's exterior borders and her proposal for "anchor centers" to process migrants at Germany's borders would work better.

"I want Europe to remain together," she said. "That is why the unified action of Europe is so important to me."

Merkel also secured agreement from Greece and Spain to take back from Germany migrants who previously registered in those countries. She said 14 other nations had given verbal assent to work toward similar deals.