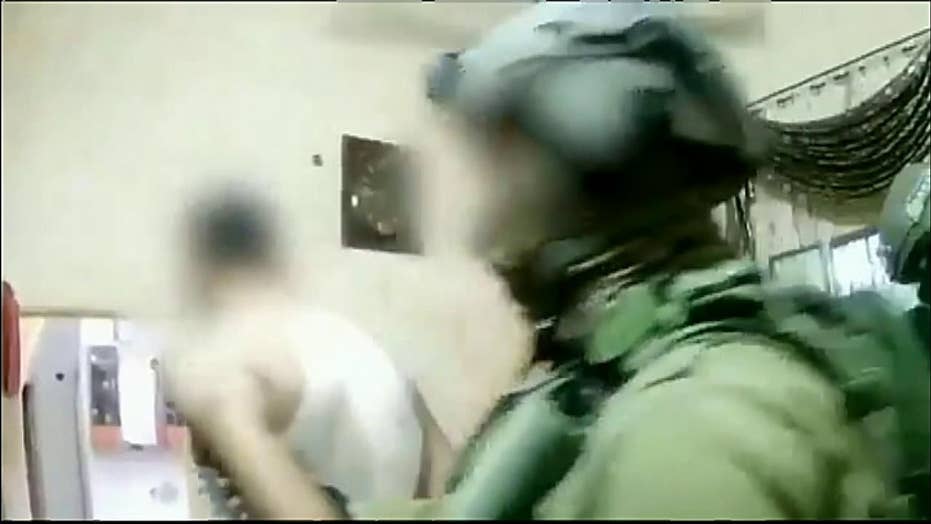 This video released by the Israel Defense Force allegedly shows arrests which prevented a terrorist attack in Jerusalem.

The Israeli military said Tuesday that it had arrested a group of Palestinians suspected of involvement in a Hamas plot to carry out a bombing in Jerusalem.

"Jerusalem is a city sacred to Jews, Christians & Muslims," the Israel Defense Forces tweeted Wednesday. "Hamas terrorists had a bomb ready, planning to carry out an attack on this Holy City."

The tweet included video of the arrests, which the Jerusalem Post reported were accomplished by a joint operation between the IDF, Israel Police and the Israel Security Agency (Shin Bet). The details of the planned bombing were not revealed.

JENNIFER LOPEZ, A-ROD PRAY AT WESTERN WALL AS MANAGER SAYS 'NOTHING' WOULD HAVE STOPPED JLO FROM ISRAEL SHOW

According to the paper, the terror cell was under the direction of Hamas' military wing and had instructions to attack targets in Israel as well as in the West Bank, which is controlled by the Palestinian Authority.  Shin Bet said cell members were instructed to create teams to carry out attacks and kidnappings, to buy weapons and to recruit more members.

"Our enemies will know that our long arm reaches to all those who try to attack us," Netanyahu wrote in a tweet Tuesday.

The Jerusalem Post reported that Israeli efforts to unravel the cell began in June with the arrest of 22-year-old Tamar Rajah Rajbi. Shin Bet said that when Rajbi was arrested, he "handed over an explosive device weighing three kilograms (6.6 pounds), which had dozens of pieces of metal attached to it to maximize fragmentation and injury in the explosion."

During the subsequent investigation, Shin Bet learned that Rajbi had been recruited by Hamas operatives from the Gaza Strip to make explosives. The operatives allegedly used the internet to train Rajbi to manufacture explosives.

Rajbi's classmate Yussef Attrash, 22, is accused of helping him buy the necessary components to make explosive devices. Shin Bet told the paper that explosives were manufactured "at the risk of unsuspecting residents nearby. For example, materials were stored in the school grounds adjacent to Rajbi’s home."

“The military wing of the Hamas terrorist organization in the Gaza Strip continues to invest considerable efforts in establishing terrorist infrastructure in the West Bank with the aim of promoting terrorist attacks in Israel aimed at undermining regional stability,” a senior Shin Bet officer told the paper. "Hamas exploits the youth in the West Bank by harming them and their families for the purpose of promoting terrorist activities, and even exploits humanitarian credentials granted by the State of Israel for this purpose."