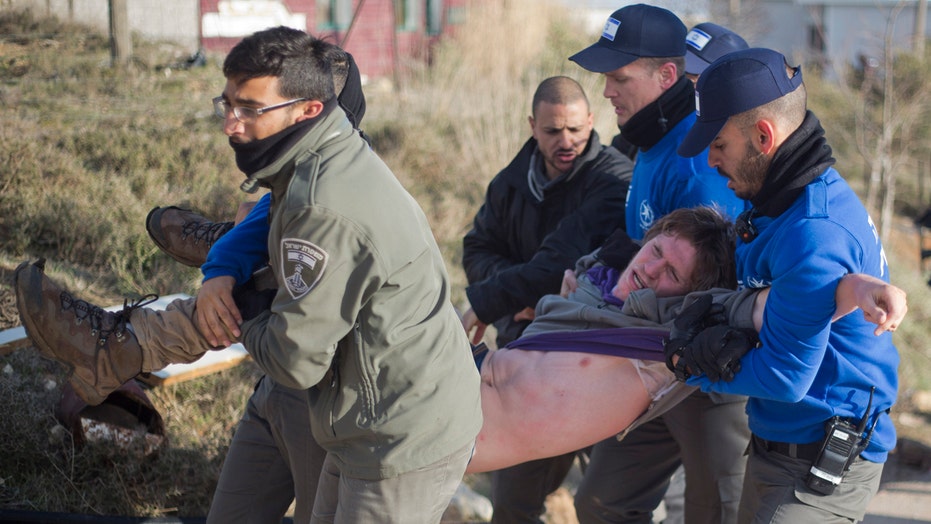 AMONA, West Bank – Israel's prime minister on Thursday vowed to establish the first new West Bank settlement in over two decades "as soon as possible," promising to make up for the court-ordered demolition of an illegal settler outpost.

Benjamin Netanyahu's announcement was his latest step to expand Israeli settlement construction in the wake of President Donald Trump's inauguration. Trump has signaled a far softer line toward the settlements, which are considered illegal by most of the international community.

Netanyahu spoke just as Israeli security forces were completing the evacuation of Amona, where they broke into a synagogue earlier on Thursday to remove dozens of Israeli protesters who had barricaded themselves inside.

Netanyahu's pro-settler government had unsuccessfully tried to block the evacuation of Amona. But Israel's Supreme Court rejected all appeals after determining the outpost was built illegally two decades ago on private Palestinian land.

Speaking at a ceremony in the West Bank settlement of Ariel, Netanyahu expressed "great pain" over the removal of Amona.

"We all understand the depth of the pain and therefore we will establish a new settlement on state land," he said. "Already yesterday I formed a team that will determine the settlement location and get everything ready. And we will act so that it happens as soon as possible."

According to the Israeli anti-settlement watchdog Peace Now, Israel has not officially broken ground on a new settlement since 1992.

Since that time, however, it has greatly expanded its existing settlements and allowed dozens of unauthorized outposts to sprout up, in some case subsequently legalizing them. In all, some 400,000 Israelis now live in West Bank settlements, in addition to 200,000 others living in east Jerusalem.

The Palestinians claim both areas, captured by Israel in the 1967 Mideast war, as parts of a future independent state. The international community has opposed the settlements, built on occupied lands sought by the Palestinians, as obstacles to peace.

After years of clashes with the Obama administration, Netanyahu's nationalist coalition has welcomed Trump's election. With Trump perceived as being sympathetic to the settlements, Netanyahu has announced plans to build over 6,000 new settlement homes since the new U.S. president was sworn in two weeks ago.

In a statement Wednesday, the White House said the administration hasn't taken an official position on settlements. But, it said, "while we don't believe the existence of settlements is an impediment to peace, the construction of new settlements or the expansion of existing settlements beyond their current borders may not be helpful in achieving that goal."

It said the president looked forward to continued discussions on settlements, including when he meets with Netanyahu at the White House on Feb. 15.

Britain and Germany, close Israeli allies, as well as the European Union criticized Netanyahu's approval this week of 3,000 new settlement homes in the West Bank.

"This spike in settlement activity undermines trust and makes a two state solution — with an Israel that is safe from terrorism and a Palestinian state that is viable and sovereign — much harder to achieve," said Britain's minister for the Middle East, Tobias Ellwood.

Amona has emerged as a symbol of settler defiance. On Thursday, Israeli police completed the evacuation of the wind-swept community, where hundreds of Jewish activists joined residents in resisting the pullout.

Police began the evacuation on Wednesday, but dozens of activists remained holed up in the synagogue. Initially, police said 200 had barricaded themselves inside but later revised the number to about 100.

On Thursday, several hundred Israeli forces surrounded the building, and officers wearing goggles and wielding plastic shields broke through the doors and sprayed water to push back defiant protesters.

Slogans including "Death to Zionists" and a swastika comparing the Israeli police to Nazis were scrawled on the synagogue walls. The police later began dragging young protesters out of the building.

Speaking to Israel Radio from inside the synagogue, the rabbi of Amona said the protesters were peacefully resisting the uprooting of the outpost. He spoke above loud noises and shouting in the background. Earlier Thursday, police removed protesters holed up in a small home nearby.

Police said 24 officers were lightly injured throughout the evacuation, and 13 young protesters were arrested.

Amona is the largest of about 100 unauthorized outposts erected in the West Bank without formal permission but with tacit Israeli government support. It witnessed violent clashes 11 years ago when police demolished nine homes found to have been built on private Palestinian land.

The Supreme Court last year determined that the entire outpost was built illegally and ordered it demolished.

On Thursday evening, the Israeli military said a Palestinian woman intentionally rammed her vehicle into a police car at the entrance to a West Bank settlement near Jerusalem, lightly injuring three people.

Since 2015, Palestinian attackers have carried out numerous stabbings, shootings and assaults using cars, killing 41 Israelis and two visiting Americans. During the same time, Israeli forces have killed 235 Palestinians. Israel says most of the Palestinians killed were attackers while other died in clashes with Israeli forces.

Israel says the bloodshed is fueled by a Palestinian campaign of incitement, compounded by social media sites glorifying attackers and encouraging violence. Palestinians say it stems from frustration over decades of Israeli rule in territory they claim for a state.