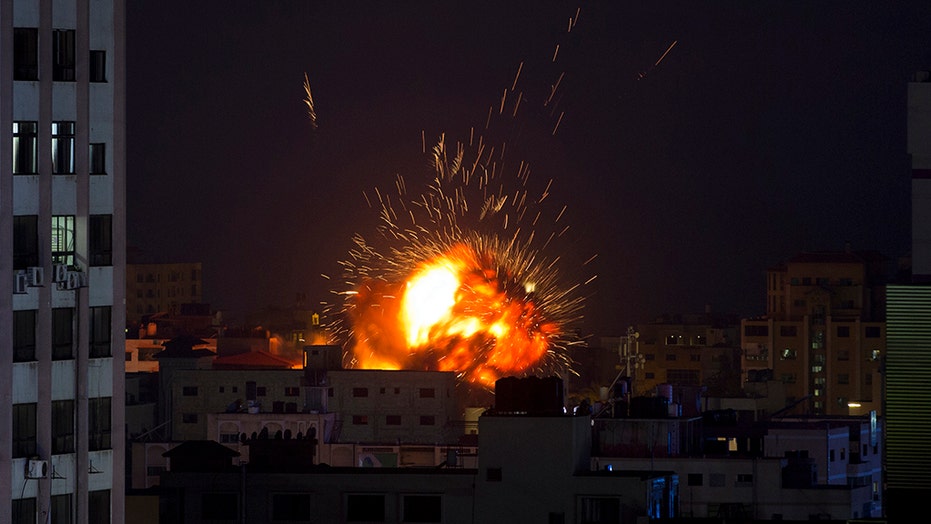 Palestinian militants in the Gaza Strip fired scores of rockets into southern Israel Saturday, prompting an Israeli response with airstrikes and tank fire.

The flare-up shattered a month-long lull in violence.

Israeli officials said a 50-year-old woman was severely wounded by rocket fire, while a teenage boy was mildly hurt as he ran for cover.

An explosion caused by an Israeli airstrike on a building in Gaza City, Saturday.<br> ​​Palestinian militants in the Gaza Strip fired scores of into southern Israel on Saturday, triggering retaliatory airstrikes and tank fire.  (AP)

Gaza's Health Ministry said a Palestinian infant was killed in an Israeli airstrike.

Israeli police said a house in the coastal city of Ashkelon was damaged.

Israel’s Iron Dome missile-defense system shot down dozens of the rockets, the Israel Defense Forces (IDF) said, according to the BBC.

In response, the IDF launched air and artillery strikes against 30 Gaza sites belonging to the militant group Hamas and the Islamic Jihad, the BBC reported.

Israeli airstrike hits Gaza City, Saturday, May 4, 2019. Palestinian militants in the Gaza Strip fired at least 90 rockets into southern Israel on Saturday, according to the Israeli military, triggering retaliatory airstrikes and tank fire against militant targets in the blockaded enclave and shattering a month-long lull in violence. (AP)

Leaders of the two groups were in Egypt for talks with mediators aimed at restoring a fraying cease-fire. Hamas leaders have hoped the recent calm would pave the way for a deeper, longer-term cease-fire.

“Egypt has stepped up its efforts with Hamas, the Islamic Jihad and Israel but there is no conclusion yet,” said a Palestinian official familiar with Cairo’s mediation efforts told Reuters.

Tensions have risen in recent days amid allegations from Hamas that Israel has been delaying implementation of last month's cease-fire understandings.

The Israeli military accused the Iranian-backed Islamic Jihad of instigating this round of violence by shooting and wounding two Israeli soldiers Friday. It said the shooting was not coordinated with Hamas, but blamed the movement for the flare-up in its capacity as the territory's rulers.