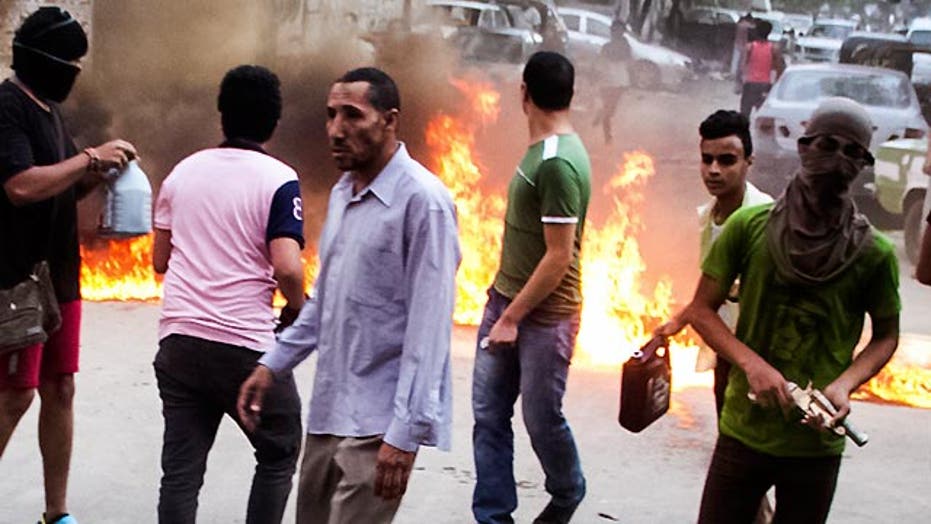 An Israeli military spokesman said that two rockets were fired from Egypt’s Sinai Peninsula and exploded inside the country and didn’t cause any casualties.

“Two rockets fired from Sinai struck southern Israel, but without causing casualties or material damage,” the spokesman told the paper.

The coordinated assaults, which included up to 70 militants, came a day after Egypt’s president pledged to step up the battle against Islamic militants and two days after the country’s state prosecutor was assassinated in Cairo.

The officials said scores of militants were besieging Sheikh Zuweid's main police station, shelling it with mortars and rocket-propelled grenades and exchanging fire with dozens of policemen inside. Reuters reported that militants planted bombs along a road between the police station and an army camp to deter reinforcements.

The U.S. strongly condemned the attacks.

White House spokesman Ned Price said Wednesday's assault is a terrorist attack and that the U.S. "stands resolutely" with Egypt. He added that the U.S. extends condolences to the relatives of those who died, as well as to the government and the Egyptian people.

Northern Sinai has over the past two years witnessed a series of complex and successful attacks targeting Egyptian security forces, many of which have been claimed by a local affiliate of the Islamic State group.

The attacks came just two days after the assassination in Cairo of the country's top prosecutor, Hisham Barakat, and one day after President Abdel-Fattah el-Sissi vowed to step up a two-year crackdown on militants.

Militants in northern Sinai stepped up their attacks following the July 2013 military ouster of Islamist President Mohammed Morsi after days of mass street protests against his rule.

El-Sissi, then the nation's army chief, led the ouster and went on to become Egypt's president, winning a landslide election a year ago on a ticket that emphasized security and economic recovery.

The attacks came in swift response to el-Sissi's pledge the previous day to carry out justice for the prosecutor general's assassination — and possibly move to execute Muslim Brotherhood leaders, an Islamist group from which Morsi hails.

Egypt has, since Morsi's ouster, waged a crackdown that has led to thousands of arrests, mass convictions and death sentences. Morsi is among those condemned to die, but has a potentially lengthy appeals process ahead of him.

El-Sissi said the government was ready to brush aside criticisms and free the judiciary's hand for a "battle" the country is prepared to wage.

Action will be taken within days "to enable us to execute the law, and bring justice as soon as possible," he said. "We will stand in the face of the whole world, and fight the whole world."

In a thinly veiled reference to jailed members of the Brotherhood, el-Sissi blamed the violence on those "issuing orders from behind bars," and warned: "If there is a death sentence, it will be carried out."

The Telegraph reports incidents along the border are rare. At the end of last year, two Israeli soldiers were wounded by gunshots and anti-tank missile fired at their car from Sinai.

Among the more serious incidents, gunmen infiltrated southern Israel and staged a serious of ambushes that killed eight Israelis in 2011.