Quiet conversions to Christianity as the dust from ISIS settles in Iraq. (Hollie McKay/Fox News)

Almost five years after ISIS slaughtered its way onto the scene in Iraq and Syria – brandishing their own extreme and much-denounced version of Islam – some in the Middle East are coming out to announce their conversion to Christianity, seeking another Abrahamic faith to drown out the nightmares of life under the terrorist tirade.

“One day, ISIS came to the house as they were unhappy with my mother and my sister. They wanted to take them away and I begged them not too, I said I would do whatever I could to protect them,” Jamial, a 35-year-old Iraqi, who in recent months made a quiet conversion to Christianity, told Fox News. “So for two years and eight months, we were forced to live under their rule and do what they say.”

Jamial was born in the Old City of Mosul. His dad died three years before ISIS overran his beloved city, and he – as the eldest son – was left to take care of his mother and two younger siblings, working in a local supermarket to make ends meet. As the battle to reclaim Mosul gathered intensity in the first half of 2017, Jamial left behind all his belongings and fled north to a displacement camp in the Kurdish capital of Erbil.

But one saving grace, he said, has been turning to Christianity since leaving Mosul – and doing so in the semi-autonomous Kurdistan, where he feels somewhat safer.

“I know in my heart God will save me,” Jamial said.

Many of the Christian churches in the Nineveh Plain in Northern Iraq were defaced or completely decimated by ISIS. (Courtesy Knights of Colombus)

Yet the healing process is slow, and the memories still haunt.

“I can never go back to Mosul, there is no civil reconciliation and peaceful coexistence. I have psychological problems and nightmares every night, worrying that ISIS will come back and kill me and take away my mother and my sister because every I worried about that,” Jamial stressed. “Sometimes I can’t sleep at all. I don’t know yet if I can trust anyone, ISIS were savages and killing people for simple mistakes.”

IRAQI CHRISTIANS IN BAGHDAD NEARLY GONE, BUT SOME SHELTER AT CAMP VIRGIN MARY

For Sam, formerly Saleem – a 26-year-old café worker in Baghdad – his conversion came at the height of the ISIS chaos in his country three years ago.

“I was a faithful Muslim, as was my family. But I saw all the bloodshed around me, I became sympathetic to what the Christians were experiencing,” he recalled. “This sadness touched my heart. I first learned more, then I changed.”

However, since the very beginning of the rise of ISIS, Imams, Islamic leaders and scholars across the globe have denounced the extreme ideology and accused the barbaric group of twisting their religion to fit a nefarious agenda.

Yet a switch to Christianity often doesn’t come without consequences.

While the passage from another faith into Islam is mainstream and widely discussed, conversions from Islam to other faiths are often staunchly prohibited and come with dangerous repercussions and retribution – meaning most must be kept shrouded in secrecy with names and identities protected. 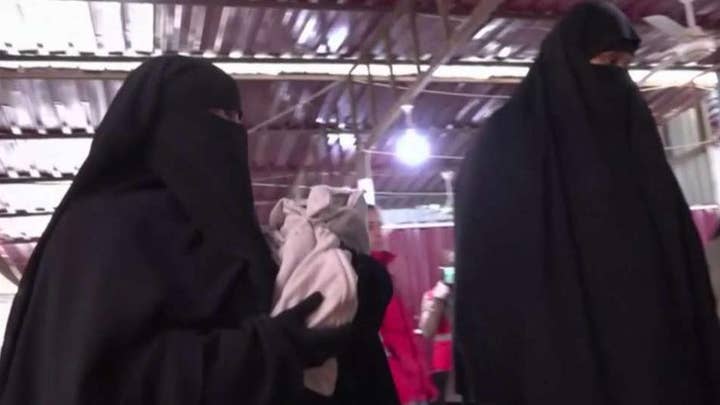 “Apostasy is a capital offense according to traditional interpretations of Islamic law. Those who convert are customarily threatened to death from either sharia-based states, radical mobs and/or their own families,” explained John Eibner, a human rights advocate and the CEO of Christian Solidarity International-USA. “Those who convert are sometimes secretly baptized, usually after a long, secret period of reflection and instruction in the faith. But it is dangerous, and those involved must exercise great discretion.”

ANDREW MCCARTHY: WHY IT'S SO HARD TO REVOKE THE CITIZENSHIP OF TERRORISTS

Sam said that every day he still feels paralyzed with fear.

“I was afraid; I am still afraid," he said. "My old friends do not communicate with me any longer and my parents have left me on my own. I mostly befriend other Christians but some of them do not believe I have converted completely. They think I could be a wolf in sheep’s clothing.

“They ask why a Muslim would convert? I do not have an answer. I tell them God works in mysterious ways. But even if my friends and family have turned against me, it is like one chapter is done and the next page is turning.”

Even before ISIS, some in the Middle East said they made a move cloaked in both fear and anticipation.

Azad Barwari, a pastor at Magnolia Baptist Church in Anaheim, California – specializing in ministry to Muslim refugees – said he converted in the year 2000 while living in the Kurdish city of Zakho near the Turkish border.

“As a result of my conversion out of Islam, I was persecuted by my family so I fled Iraq and lived in Lebanon for several years where I was imprisoned and tortured,” Barwari claimed. “I came to the USA in 2009 as a religious refugee.”

In this photo taken Monday, June 23, 2014, fighters from the Islamic State group parade in a commandeered Iraqi security forces armored vehicle down a main road at the northern city of Mosul, Iraq. Islamic State militants have abducted at least 70 Assyrian Christians, including women and children, after overrunning a string of villages in northeastern Syria, two activist groups said Tuesday, Feb. 24, 2015. (AP Photo/File) (The Associated Press)

He said that as a result, he has received two death threats in the U.S, which he has reported to authorities, but otherwise refuses to shy away from sharing his thoughts and experiences.

“In the year 2000, someone gave me the New Testament when I was sitting at a store in Zakho. It was during Ramadan and I was fasting,” he recalled. “The book was in an envelope and I didn’t know it was a Bible. I liked reading and I had a spiritual hunger. This touched my heart, and Christ answered me. We Kurds were living in enmity and I was angry and I need peace.”

Christianity has for decades been dwindling in the Middle East amid a climate of persecution and insecurity, but the ISIS onslaught over four years ago prompted tens of thousands more to flee.

It’s believed that less than five percent of the Syrian and Iraqi population is Christian, a sharp decline from the roughly ten percent a decade ago.

For others in the region, the ISIS incursion has not necessarily meant a conversion into another faith, but a deeper reflection and move away from religion altogether.

A Christian militiaman stands guard during Easter Mass in Qaraqosh, Iraq, Sunday, April 16 2017. The town has been gutted by Islamic State militants. Now under government control, residents have not returned. (AP Photo/Maya Alleruzzo) (The Associated Press)

“When ISIS came and the chaos of them kidnapping Yazidi girls and making them sex slaves, and killing anyone who didn’t fit their perspective made me think twice,” one 35-year-old Iraq-based female professional, who can only be identified as Saleema, explained. “I wanted to be free and just be a good person with good manners without following any belief. Now, I don’t follow any religion. I don’t want to hear stories to satisfy or control.”

According to Alex McFarland, a U.S-based apologist and noted church speaker, conversions to Christianity are far more prevalent in the Middle East than Westerners realize “and the unconscionable actions of ISIS have prompted (that).”

“Interestingly, some ex-Muslims merely become atheists,” he added. “They don’t really land anywhere else, such as another faith system. They just become secular.”