An American contractor has died Wednesday after suffering a "cardiac episode" while sheltering in place during a rocket attack at an airbase in Iraq that hosts U.S., Iraqi and coalition troops, the Pentagon said.

At least 10 rockets struck the Ain al-Asad base, located in the western Anbar province, at 7:20 a.m. local time, a military spokesman in Iraq told Fox News. Pentagon press secretary John Kirby said there are no reports of injuries to U.S. service members and all are accounted for.

"We extend our deepest condolences to the loved ones of the individual who died," he said in a statement, noting that the "civilian contractor suffered a cardiac episode while sheltering and sadly passed away shortly after."

U.S. Army drones are seen at the Ain al-Asad airbase in the western Iraqi province of Anbar, Jan. 13, 2020. (Getty Images)

Kirby added that Iraqi security forces are on the scene investigating following the rocket attack, which engaged the base’s missile defense systems. Defense Secretary Lloyd Austin has also been briefed on the situation.

"We cannot attribute responsibility at this time, and we do not have a complete picture of the extent of the damage," Kirby said.

The Iraqi military released a statement saying the attack did not cause significant losses and that security forces had found the launch pad used for the rockets: a burned-out truck. It was discovered in the al-Baghdadi area of Anbar, about five miles from the base, an Iraqi military official said on condition of anonymity to discuss the attack with the media.

Video of the site shows a burning medium-sized truck in a desert area.

POPE FRANCIS WILL STILL TRAVEL TO IRAQ DESPITE ROCKET ATTACK: ‘WE CAN’T DISAPPOINT’

The base hit Wednesday was the same one targeted last February in an attack that left about 100 troops with head injuries. Patriot missiles were installed at the base after that attack.

That strike along the Syria-Iraq border was in response to a spate of rocket attacks that targeted the U.S.' presence in the region, including one that killed a coalition contractor from the Philippines outside the Irbil airport.

U.S. officials described the Biden-ordered response as "proportionate" to the preceding rocket fire. 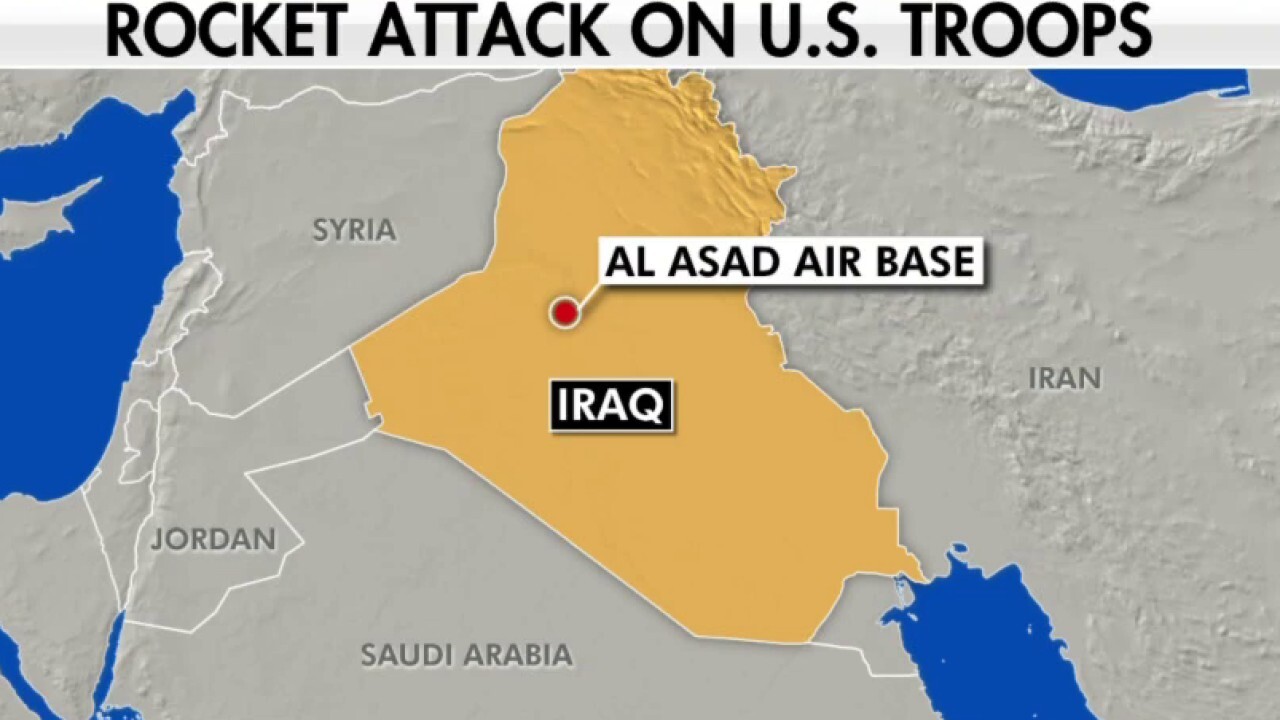 But the source of Wednesday’s attack was not immediately known.

The rocket fire also came as Pope Francis planned a historic visit to Iraq for later this week that would make him the first pontiff to ever visit the country.

British Ambassador to Iraq Stephen Hickey condemned the attack, saying it undermined the ongoing fight against the Islamic State group. "Coalition forces are in Iraq to fight Daesh at the invitation of the Iraqi government," he tweeted, using the Arabic acronym for ISIS. "These terrorist attacks undermine the fight against Daesh and destabilize Iraq."

Denmark, which like the U.S. and Britain also has troops at the base, said coalition forces at Ain al-Asad were helping to bring stability and security to the country.

"Despicable attacks against Ain al-Asad base in #Iraq are completely unacceptable," Danish Foreign Minister Jeppe Kofod tweeted. The Danish armed forces said two Danes, who were in the camp at the time of the attack, are unharmed.

Fox News' Lucas Tomlinson, Jennifer Griffin contributed to this report, as well as The Associated Press.