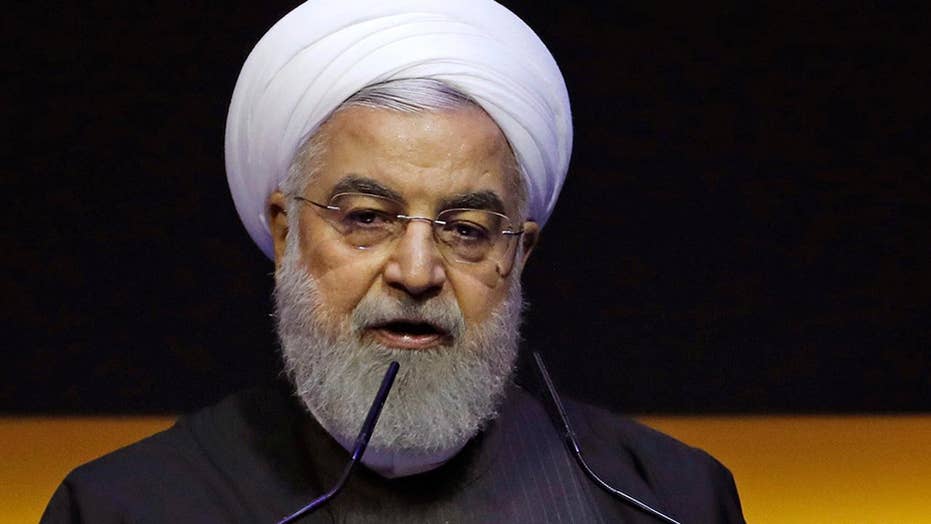 Iran’s President Hassan Rouhani warned Wednesday that the Islamic Republic’s “final answer” to the killing of Gen. Qassem Soleimani “will be to kick all U.S. forces out of the region”.

“General Soleimani fought heroically against ISIS, Al Nusra, Al Qaeda… if it weren’t for his war on terror, European capitals would be in great danger now,” Rouhani said.

“Our final answer to his assassination will be to kick all U.S. forces out of the region,” he added.

Iranian President Hassan Rouhani, left, meets family of Iranian Revolutionary Guard Gen. Qassem Soleimani, who was killed in the U.S. airstrike in Iraq, at his home in Tehran, Iran, on Saturday.

IRAN BURIES SOLEIMANI AFTER NEW ATTACKS ON US, COALITION FORCES IN IRAQ

The tone in Rouhani’s remarks was a shift from comments Iranian Foreign Minister Javad Zarif made Tuesday evening, in which he said his country “took & concluded proportionate measures in self-defense” for the killing of Soleimani, striking the bases where the missiles targeting him were launched.

“We do not seek escalation or war, but will defend ourselves against any aggression,” Zarif had tweeted.

President Trump declared Wednesday that Iran “appears to be standing down” and that the strikes resulted in “no casualties.”

Rebeccah Heinrichs, former House Military Adviser, explains why Iran's strike was a fireworks show and a tactical victory for the U.S.

The office of Iraq’s president condemned the strikes Wednesday as a breach of the country’s sovereignty.

Barham Saleh's office said in a statement that the fate of U.S. troops in Iraq is an internal matter based on legal agreements to combat the Islamic State terrorist group.

The statement adds that Iraq "has previously declared its refusal to be a starting point for aggression against any country, and also refuses to be a source of threat to any of its neighbors."

NATO Secretary-General Jens Stoltenberg also condemned the strikes Wednesday, tweeting that the bloc is calling on Iran to “refrain from further violence.”

Four U.S. defense officials told Fox News that the military did not attempt to shoot down the ballistic missiles fired from Iran into Iraq because there were no American military assets in place to intercept them.

The Patriot and Avenger anti-missile defense systems are deployed to other locations in the Middle East, but not to the two Iraqi bases – al-Asad and Erbil – targeted by Iran. Officials say the American assets are in high demand and short supply around the world.

“For the past few years, our focus was defeating ISIS and keeping a light footprint in Iraq. We did not need air defense systems against ISIS,” as one official explained for why there was no U.S. missile defense systems in place at the Iraqi bases.