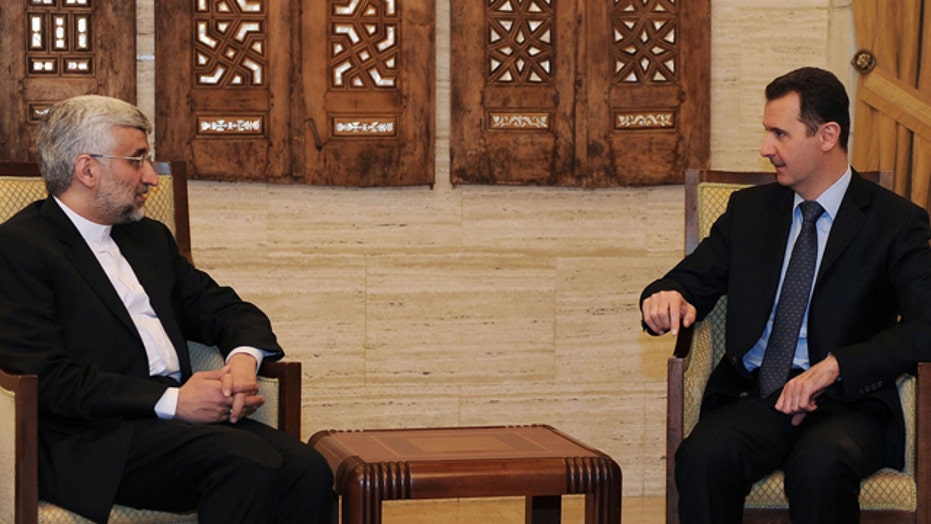 DAMASCUS, Syria – A top Iranian official visiting Damascus on Monday said Israel will regret its "latest aggression" on Syria and said the entire Muslim world should be ready to defend the Syrian people.

Saeed Jalili, the head of Iran's National Security Council, also said Iran supports any initiative for dialogue between President Bashar Assad and his opponents to end the civil war in Syria, but insisted that any talks be held in the Syrian capital, Damascus. Jalili spoke to reporters at a news conference in Damascus at the end of a three-day visit to Syria.

"Just as it regretted its aggressions after the 33-day, 22-day and eight-day wars, today the Zionist entity will regret the aggression it launched against Syria," Jalili said, referring to past wars between Israel and the Lebanese militant Hezbollah and Palestinian Hamas groups.

Syria said the strike targeted a military research facility and vowed retaliation, but has so far refrained from any response.

Israel has not officially confirmed that its planes attacked the site but its intentions have been beyond dispute. During the 22 months of civil war in Syria, Israeli leaders have repeatedly expressed concern that high-end weapons could fall into the hands of its enemy Hezbollah.

For years, Israel has been charging that Assad and Iran have been arming Hezbollah, which fought a month-long war against Israel in 2006.

U.S. officials say the target was a convoy of sophisticated Russian SA-17 anti-aircraft missiles. Deployed in Lebanon, they could have limited Israel's ability to gather intelligence on its enemies from the air.

Over the weekend, Syrian TV broadcast video of Wednesday's attack site for the first time, showing destroyed vehicles and a damaged building identified as a scientific research center. The U.S. officials said the airstrike hit both the building and the convoy.

Jalili, however, did not say how Israel would regret its attack or how the Islamic world will defend Syria.

He welcomed comments by the head of the Syrian main opposition group, Mouaz al-Khatib, without naming him, in which he expressed readiness to talk to the regime if that would help end the bloodshed. Al-Khatib has said he is ready to talk with the regime in "Egypt, Turkey or Tunisia."

"We've said from the start of the Syrian crisis that the only thing that can help resolve the crisis is national dialogue in Syria," Jalili said.

"We've said that terrorism and violent behaviors and killing innocent people cannot be a step towards defending the rights of the Syrian people," he added.