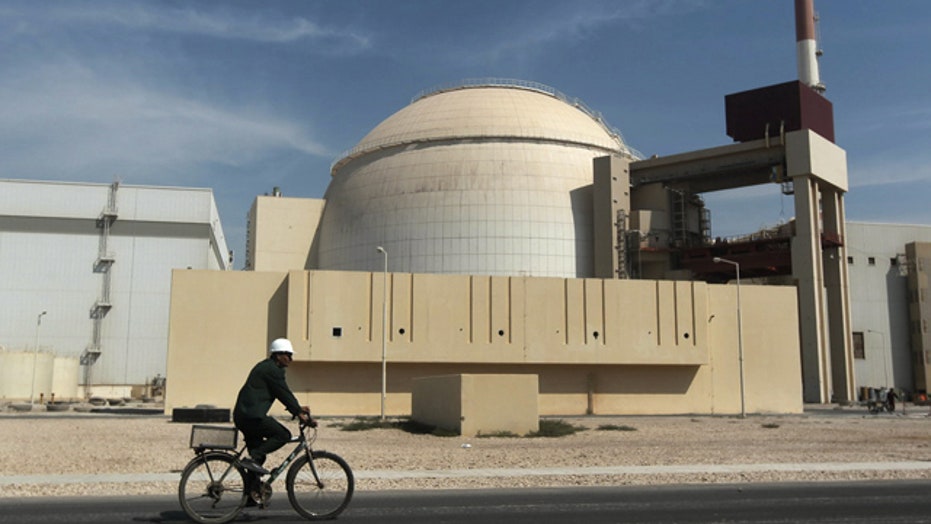 Iranian negotiators put forth what they called a potential breakthrough plan on Tuesday aimed at easing fears that Tehran wants nuclear weapons.

The plan, which Deputy Foreign Minister Abbas Araghchi called "An End to the Unncessary Crisis and a Beginning for Fresh Horizons," was delivered on the first day of the long-stalled nuclear talks being held in Geneva.

Araghchi told reporters negotiators had agreed to keep the details confidential during the morning bargaining session.

"We think that the proposal we have made has the capacity to make a breakthrough," he told reporters.

Alluding to the international pressure over Iran's nuclear program that has driven the country into near-pariah status, Araghchi said: "We no longer want to walk in the dark and uncertainty and have doubts about the future."

Iran wants painful international sanctions to be lifted in exchange for possible concessions it had previously been unwilling to consider, including increased monitoring and scaling back on uranium enrichment — a potential path to nuclear arms and the centerpiece of the impasse with the West.

A member of one of the delegations present at the talks told The Associated Press the plan offered reductions in both the levels of uranium enrichment being conducted by Iran and the number of centrifuges doing the enrichment — both key demands from the six nations with Iran at the negotiating table. The source demanded anonymity because he was not authorized to divulge details.

The session resumed in the afternoon and a U.S. State Department official said the six powers were looking at further details of Iran's presentation. The official also demanded anonymity because she was not authorized to divulge details about the closed meeting.

Iran, whose uranium enrichment program is at the core of the six world powers' concerns, now has more than 10,000 centrifuges churning out enriched uranium, which can be used either to power reactors or as the fissile core of a nuclear bomb. Iran has long insisted it does not want nuclear arms — a claim about which the U.S. and its allies have been skeptical — but has resisted international attempts to verify its aims.

Tehran is now under international sanctions that are biting deeply into its troubled economy, and since the election of the reformist Iranian President Hassan Rouhani in June, state officials have indicated that they're willing to compromise on the nuclear issue.

The U.S, Russia, China, Britain, France and Germany are eager to test whether those words will translate into real progress such as increased international monitoring and scaling back uranium enrichment.

"We have seen some positive mood music coming out of Tehran," Mann said. "But of course the most important thing is that they actually follow it up with concrete proposals that address our concerns."

Araghchi said that the U.S. and its partners had "welcomed" Tehran's proposals Tuesday, saying what his country presented "has the capacity to make a breakthrough."

"We had a very serious and good meeting this morning," he said to reporters, according to Reuters. "The questions that were asked regarding Iran's plan were completely serious and our answers were as well. Both sides felt that the opposite side was continuing the negotiations with motivation."

No final deal is expected at the two-day session.

However, if the Iranians succeed in building trust, the talks could be the launching pad for a deal that has proven elusive since negotiations on Iran's nuclear program began in 2003.

That would reduce the threat of war between Iran and Israel and possibly the United States. The latter two have vowed never to accept a nuclear-armed Iran.

From the six-power perspective, the ideal outcome would be for Tehran to scale back aspects of its nuclear program that many nations fear could aid in making a bomb. That would trigger a gradual lifting of the economic sanctions on Iran.

Other Iranian officials, meanwhile, say there is room to discuss international concerns about Iranian uranium enrichment to 20 percent — a level that is higher than most reactors use for power and only a technical step away from weapons-grade uranium suitable for warheads.

Iran now has nearly 440 pounds of 20 percent-enriched uranium in a form that can be quickly upgraded for weapons use, according to the U.N.'s atomic agency, which keeps tabs on Iran's nuclear activities. That is close to — but still below — what is needed for one nuclear weapon.

Even if Iran agrees to stop 20-percent production, ship out its 20-percent stockpile and allow more oversight by U.N. nuclear inspectors, the six powers want more.

A former senior U.N. official who has acted as an intermediary between U.S. and Iranian officials said the six powers want significant cuts in the more than 10,000 centrifuges now enriching uranium.

They also demand that Iran ship out not only the small amount of 20 percent uranium it now has but also most of the tons of low-enriched uranium it has produced. And they want caps on the amount of enriched uranium that Iran would be allowed to keep at any time. The official spoke on condition of anonymity because he was not authorized to comment on the talks.

Iran says it needs this material to power a future reactor network, and Iranian state television Sunday quoted Araghchi as saying Tehran was ready to discuss its enrichment program but would never ship enriched materials abroad. He described that stance as "our red line."

For the U.S. and its allies, low-enriched uranium is problematic because it can also be used to arm nuclear weapons, albeit the process is longer and more complicated than for 20 percent uranium.

While seeking only to reduce enrichment at a sprawling underground facility at Natanz, the six powers also want complete closure of another enrichment plant at Fordo, south of Tehran. The Fordo site is heavily fortified, making it more difficult to destroy than Natanz if it turns toward making nuclear weapons.

Demands to reduce enrichment instead of stopping it implicitly recognize Iran's right to enrich for peaceful purposes. That already is a victory for Tehran, considering talks began 10 years ago with the international community calling on the Islamic Republic to mothball its enrichment program.

"It's pretty clear that Iran will have to be allowed some degree of enrichment," said former U.S. State Department official Mark Fitzpatrick, who now is a director at the International Institute for Strategic Studies. "But the enrichment has to be limited."

That could be a tough sell politically for the U.S. and Israel.