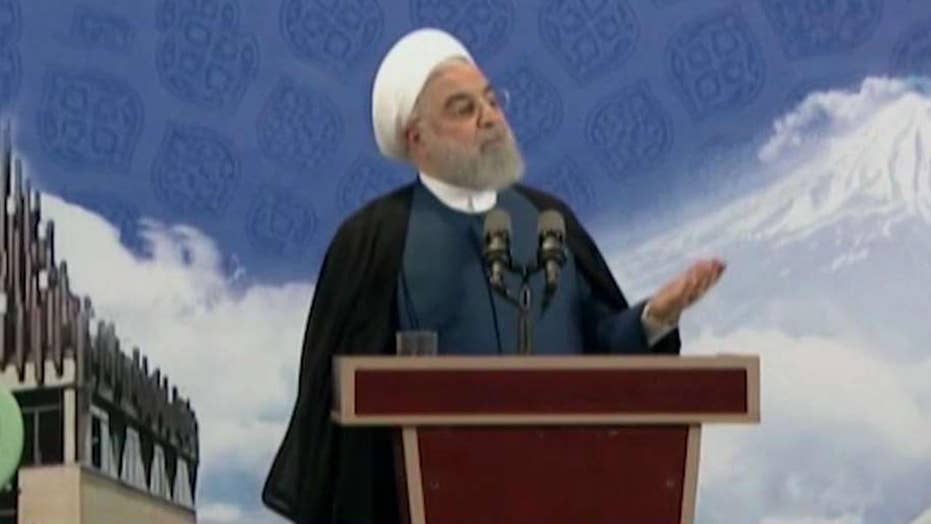 Iran President Hassan Rouhani said his country's nuclear experts have begun the testing of new, advanced centrifuges for uranium enrichment, marking yet another violation of the 2015 nuclear deal.

Rouhani spoke to Iranian expats during a meeting Wednesday in Kuala Lumpur, Malaysia, about the success of Iran’s current centrifuge model and the testing of a new prototype, according to the state-run IRNA news agency.

“We have had great achievements and today, Iranian new IR-6 centrifuges are working and models IR-9 are currently being tested,” Rouhani is quoted as saying.

Rouhani also spent his time in Malaysia speaking at an Islamic conference where he urged Muslim nations on Thursday to deepen financial and trade cooperation to fight what he described as U.S. economic hegemony. (AP Photo/Lai Seng Sin)

The testing of new centrifuges for uranium enrichment is just Iran’s latest step away from its atomic accord with world powers since President Trump pulled America out of the 2015 nuclear deal.

In November, Iran began injecting uranium gas into over a thousand centrifuges at a nuclear facility at Fordo, built inside a mountain described by nuclear watchdogs as a “fortified, underground bunker.”

Under the deal, Iran has agreed not to operate the Fordo centrifuges. Iranian officials have said these steps are “reversible” if European nations that also signed the deal find a way to allow Iran to sell its oil on foreign markets and compensate Tehran for U.S. sanctions imposed by the Trump administration.

For now, Iran is enriching uranium up to 4.5%, in violation of the accord’s limit of 3.67%. Enriching uranium at the 3.67% level is enough for peaceful purposes but is far below weapons-grade levels of 90%.

Turkey's President Recep Tayyip Erdogan, centre left, was among other world leaders present at the Islamic conference on Thursday. Erdogan and Rouhani had a meeting on the sidelines of the conference. (Presidential Press Service via AP, Pool)

Rouhani also spent his time in Malaysia speaking at an Islamic conference where he urged Muslim-majority nations on Thursday to deepen financial and trade cooperation to fight what he described as U.S. economic hegemony.

“The Muslim world should be designing measures to save themselves from the domination of the United States dollar and the American financial regime," he said at the opening ceremony among world leaders from Turkey, Qatar and host Malaysia.

His proposal included an Islamic financial payment with Muslim countries trading in local currencies and the creation of a Muslim cryptocurrency to cut reliance on the U.S. dollar.

Rouhani repeated his assertion that the U.S. has used economic sanctions as the “main tools of domineering hegemony and bullying" of other nations.