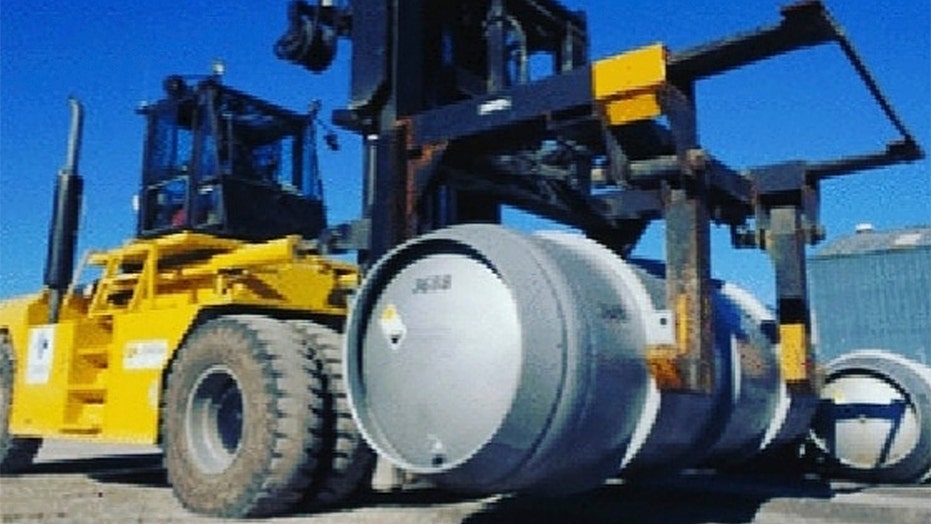 Iran is gearing up Wednesday to start injecting uranium gas into more than 1,000 centrifuges at a site described by nuclear watchdogs as a “fortified, underground bunker.”

The 1,044 devices at the Fordo facility will be pumped with gas beginning at midnight, and will be used to enrich uranium up to 4.5%, Behrouz Kamalvandi, a spokesman for the Atomic Energy Organization of Iran, told state television today.

The development will mark Tehran’s latest step away from the nuclear accord with world powers since President Trump withdrew from the deal over a year ago.

As of now, Iran is enriching uranium up to 4.5%, in violation of the accord's limit of 3.67%, the Associated Press reports.

A truck on Wednesday carries a cylinder containing uranium hexafluoride gas for the purpose of injecting the gas into centrifuges in Iran's Fordo nuclear facility. (AP/Atomic Energy Organization of Iran)

Enriched uranium at the 3.67% level is enough for peaceful pursuits but is far below weapons-grade levels of 90%. At the 4.5% level, it is enough to help power Iran's Bushehr reactor, the country's only nuclear power plant.

Under the 2015 nuclear deal, Iran agreed not to operate the Fordo centrifuges. Iranian officials have said these steps are “reversible” if European nations that also signed the deal find a way to allow Iran to sell its oil on foreign markets and compensate Tehran for U.S. sanctions imposed by the Trump administration.

The looming changes at Fordo were first announced by Iranian President Hassan Rouhani on Tuesday.

In this 2018 frame grab from Iranian state TV, three versions of domestically-built centrifuges are shown during a live program from Natanz, an Iranian uranium enrichment plant, in Iran. (AP/IRIB)

Iran's envoy to the International Atomic Energy Agency -- the United Nations' nuclear watchdog monitoring Iran's compliance with the deal -- later told state-run media that the watchdog received word of Tehran's decision in a letter. That message also asked the IAEA for its inspectors to be on hand Wednesday for the gas injections.

"Iran has no credible reason to expand its uranium enrichment program, at the Fordo facility or elsewhere, other than a clear attempt at nuclear extortion that will only deepen its political and economic isolation," Ortagus said.