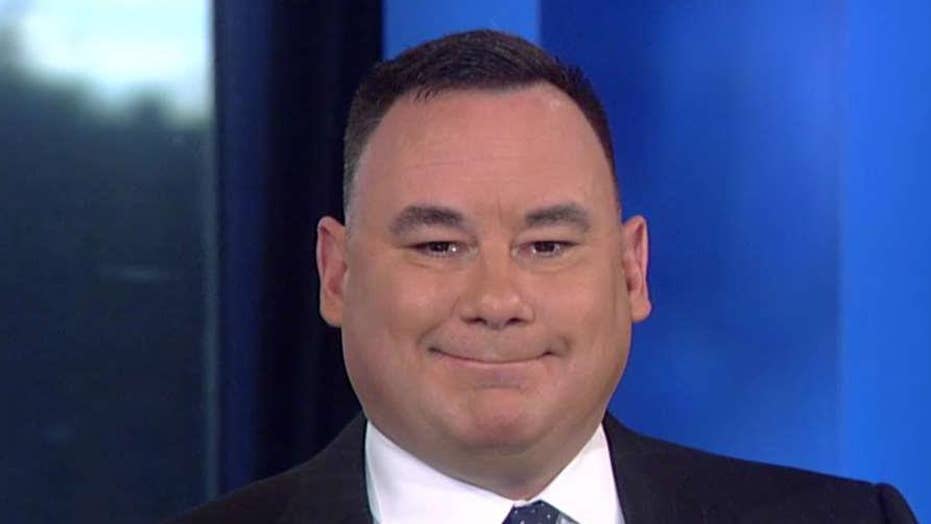 Iran officials announced Sunday they will abandon the rogue nation's commitments to the 2015 nuclear deal with world powers after the United States killed one of Iranian Gen. Qassem Soleimani in an airstrike in Baghdad Friday.

Sunday’s announcement, which represented the clearest nuclear proliferation threat yet made by Iran since President Trump unilaterally withdrew from the accord, came after another Iranian official said it would consider taking even-harsher steps over the killing of Soleimani.

It also threatened to inflame regional tensions further, as Iran's longtime foe Israel has promised never to allow Iran to be able to produce an atomic bomb.

The body of Gen. Qassem Soleimani arrived Sunday in Iran to throngs of mourners, as President Trump threatened to bomb 52 sites in the Islamic Republic if Tehran retaliates by attacking Americans.  (ISNA via AP)

Hundreds of thousands of people flooded the streets in Iran Sunday to walk alongside a casket carrying the remains of Soleimani, the former leader of its expeditionary Quds Force that has organized Tehran's proxy forces in the wider Mideast.

Iran's state TV cited a statement by President Hassan Rouhani's administration saying the country will not observe limitations on its enrichment, the amount of stockpiled enriched uranium as well as research and development in its nuclear activities.

Meanwhile, Iraq's parliament voted in favor of a resolution aimed at expelling the 5,000 U.S. troops stationed there over the war against the Islamic State terror network.

Soleimani's killing has escalated the crisis between Tehran and Washington after months of trading attacks and threats that have put the Middle East on edge. The conflict was rooted in Trump pulling out of Iran's atomic accord in May 2018 and imposing sanctions that have crippled Iran's economy. 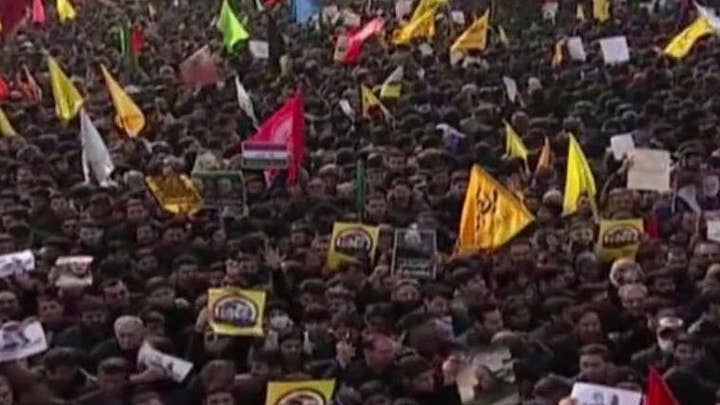 Iran has promised "harsh revenge" for the U.S. attack.

After thousands in Baghdad on Saturday mourned Soleimani and others killed in the strike, officials flew the general's body to the Iranian city of Ahvaz, a city that was a focus of fighting during the 1980-1988 war between Iraq and Iran in which the general slowly grew to prominence. After that war, Soleimani joined the Guard's newly formed Quds Force.

Crews then transported Soleimani's body to the city of Mashhad later Sunday. State TV estimated that a million mourners came out to the Imam Reza shrine to pay their respects.

Soleimani was the architect of Iran's regional policy of mobilizing militias across Iraq, Syria and Lebanon. He also was blamed for attacks on U.S. troops and American allies going back decades.

Although it's unclear how or when Iran may respond to Soleimani’s death, any retaliation was likely to come after three days of mourning declared in both Iran and Iraq.

Mohsen Rezaei, a former leader of the Guard, told a crowd in Tehran that the Israeli cities of Haifa and Tel Aviv could be targeted. Rezaei earlier alleged that Israel leaked information to the U.S. about Soleimani's whereabouts, which allowed them to carry out the drone strike.

"Rest assured we will level to the ground Haifa and Israeli centers so that Israel will be wiped out," he said. "The issue is very serious for the Iranian nation. You hit us and you should get hit. You attacked us and it is the Iranian nation's right."

Iranian officials planned to meet Sunday night to discuss further steps away from its 2015 nuclear deal with world powers, one that could be even greater than planned. Iran has previously broken limits of its enrichment, its stockpiles and its centrifuges, as well as restarted enrichment at an underground facility.

The Iranian parliament on Sunday opened with lawmakers chanting: "Death to America!" Parliament speaker Ali Larijani described American officials as following "the law of the jungle."

Soleimani is to lie in state at Tehran's famed Musalla mosque Monday as the revolutionary leader did before him. His remains are then set to go to Qom for public mourning processions, followed by his hometown of Kerman for burial Tuesday.