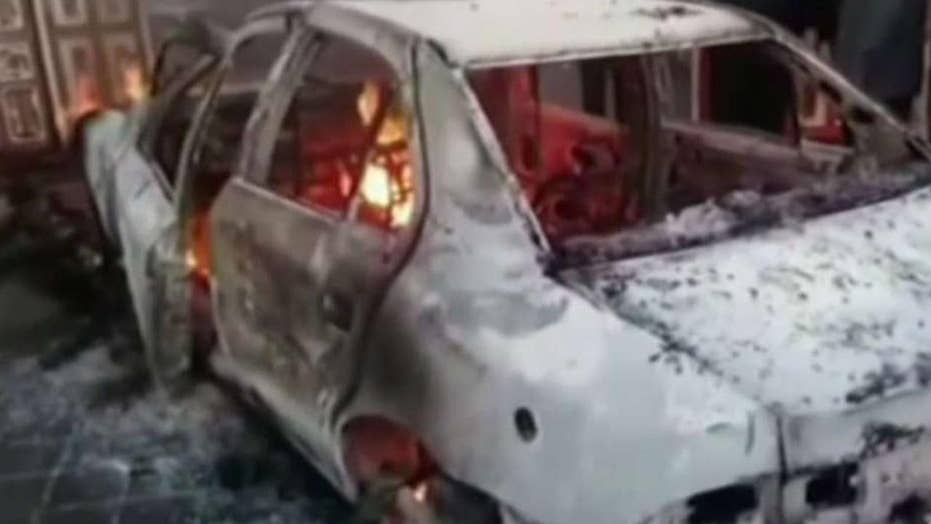 Conor Powell reports on the demonstrators' calls for regime change and how the supreme leader is responding.

Iran’s supreme leader lashed out at the Islamic republic’s “enemies” as the death toll from widespread protests rose to at least 20 and the theocratic regime faced its biggest internal threat since the so-called “green movement” of 2009.

On his official website, Ayatollah Ali Khamenei blamed “enemies of Iran” on Tuesday after at least nine more people were reported killed in violent clashes with security forces.

In protests around the terror-sponsoring nation, demonstrators have chanted “death to the dictator” and clashed openly with police and military officials.

The towns are all in Iran's central Isfahan province, some 215 miles south of Tehran.

The demonstrations, lasting six days so far, have resulted in a death toll of at least 20 people.

The protests, which began Thursday in Mashhad, are the largest to strike Iran since the country’s disputed 2009 presidential election. Some protesters have been chanting against the government and the supreme leader, Ayatollah Ali Khamenei.

Hundreds of people have been arrested and a prominent judge on Tuesday warned that some could face death penalty trials.

In comments posted to his official website, Khamenei appeared to blame foreign nations for at least exacerbating the unrest gripping Iran.

"In the recent days' incidents, enemies of Iran utilized various means -- including money, weapons, politics and intelligence apparatuses -- to create problems for the Islamic system," he said.

Khamenei said he would elaborate further in the coming days.

Calling the protesters "brave" and "heroic," Benjamin Netanyahu said in a video posted to YouTube on Monday that the protesters sought freedom, justice and "the basic liberties that have been denied to them for decades."

He criticized the Iranian regime's response to the protests and also chided European governments for watching "in silence" as the protests turn violent.

Although the demonstrations were initially focused on economic hardships and alleged corruption, they turned into political rallies, Reuters reported.

Many Iranians were angry about foreign interventions and wish for their leaders to create jobs at home, where youth unemployment hit 29 percent last year, the report said.

In Tehran, about 450 protesters have been arrested in the last three days, the semi-official ILNA news agency reported. Authorities have not released a nationwide figure for arrests so far.

Musa Ghazanfarabadi, head of Tehran’s Revolutionary Court, warned protesters Tuesday that those arrested could face the death penalty when they come to trial.