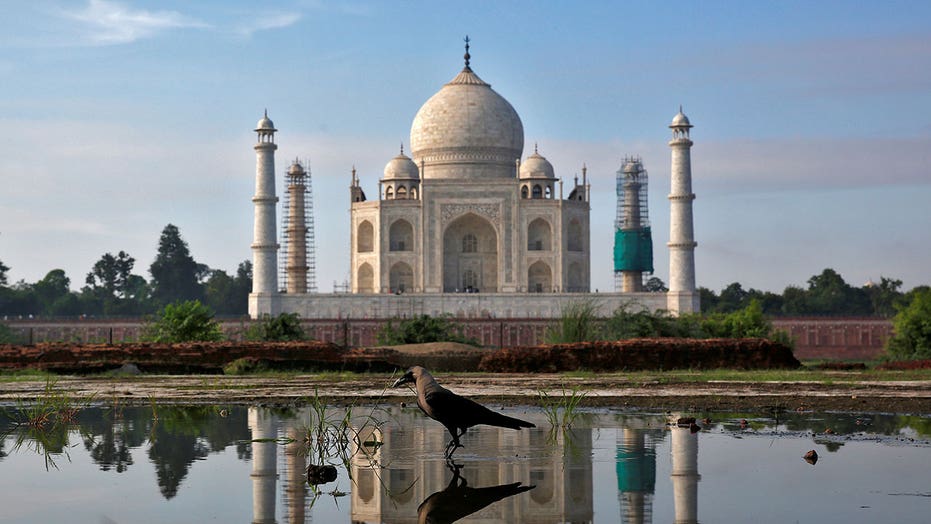 There is a “foul smell” in the air near one of India’s most popular tourist attractions – and officials there are hoping President Trump won’t notice.

The city of Agra, home of the famed Taj Mahal – which Trump will visit next week during a two-day tour of India – is now racing to clean up the polluted Yamuna river that runs behind the iconic structure.

An official who manages a canal network in the area told Reuters Thursday that an additional 17 million liters of water will be released into the Yamuna in a bid to wash away the stink.

A cleanup effort is ongoing at the Taj Mahal ahead of President Trump's visit there next week. (Reuters)

The flow, he says, was ordered “to keep it clean and remove the foul smell.”

Nearly seven million tourists flock to the site each year, but air pollution has been staining the monument’s white marble, Reuters reports.

Elsewhere in India, a hastily built 1,640-foot brick wall in front of a slum in the Gujarat state has stoked tensions ahead of Trump’s arrival, with critics saying it is meant to hide the area called home by more than 2,000 people.

Indian workers construct a wall in front of a slum ahead of U.S. President Donald Trump's visit, in Ahmadabad, India, Monday, Feb. 17, 2020. Trump is scheduled to visit the city during his Feb. 24-25 India trip. (AP Photo/Ajit Solanki)

In another slum near a cricket stadium in Gujarat state – where the U.S. president will attend an event -- 45 families living there were hit with eviction notices.

Fox News’ Stephen Sorace and the Associated Press contributed to this report.