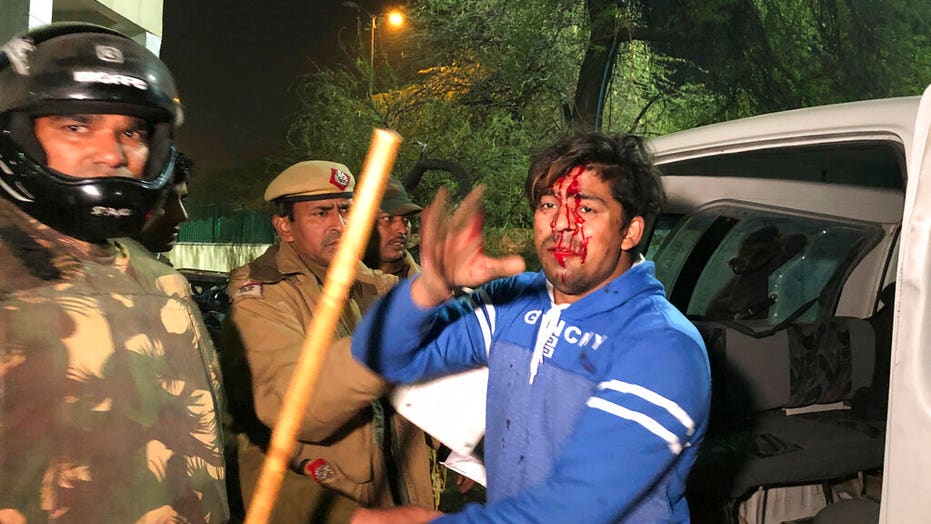 The third day of protests against a new law in India -- which would give citizenship to people from neighboring countries fleeing religious persecution unless they are Muslim -- turned violent as demonstrators lit buses on fire and fought with police.

In Dehli, three buses went up in flames as police fired tear-gas and struck some demonstrators with batons.

A passenger bus up in flames during a protest against Citizenship Amendment Act in New Delhi, India, on Sunday. (AP Photo)

The citizenship amendment bill would grant Indian nationality to Buddhists, Christians, Hindus, Jains, Parsis and Sikhs who escaped Pakistan, Bangladesh and Afghanistan before 2015.

The bill has sparked protests across the country by critics who said it’s discriminatory and violated India’s secular principles. The ruling Bharatiya Janata Party (BJP) has argued it will give sanctuary to people escaping religious persecution in those nations.

Prime Minister Narendra Modi, a member of the BJP, introduced the bill after his reelection victory earlier this year. The bill passed the upper house of parliament by 125 to 105 after clearing the lower house on Monday.

The protests in the nation's capital city remained relatively peaceful in the first few days, and student organizers from the Jamia Millia Islamia University blamed outsiders for the violence.

“We have time and again maintained that our protests are peaceful and non-violent,” they said in a statement. “We stand by this approach and condemn any party involved in the violence.”

Still, police used force on student protestors, and 26 injured students were taken to nearby hospitals for treatment, a hospital spokesman told The Associated Press.

“The police beat me mercilessly after pinning me down to the ground. My other friends weren’t spared either," said Mujeeb Raza, a student who was being treated at the nearby Al-Shifa hospital.

Violent protests immediately broke out, however, in India's northeastern state of Assam on the border with Bangladesh. Demonstrators there decried the law for a different reason, saying they feared non-Muslim migrants from neighboring Bangladesh would “overrun” them, and the influx would dilute the culture and political power of indigenous tribal people in that region. Protesters burned tires and blocked main roads and railway lines, and the government deployed the army to quell the violence in the state. A curfew was declared and Internet and mobile services blocked in a number of districts to prevent further violence.

The violence in the area around Delhi’s Jamia Nagar, a predominantly Muslim area, forced shops and homeowners to shutter their doors to protestors.

Protestors hurled stones at police and video footage showed broken glass and blood in the streets.