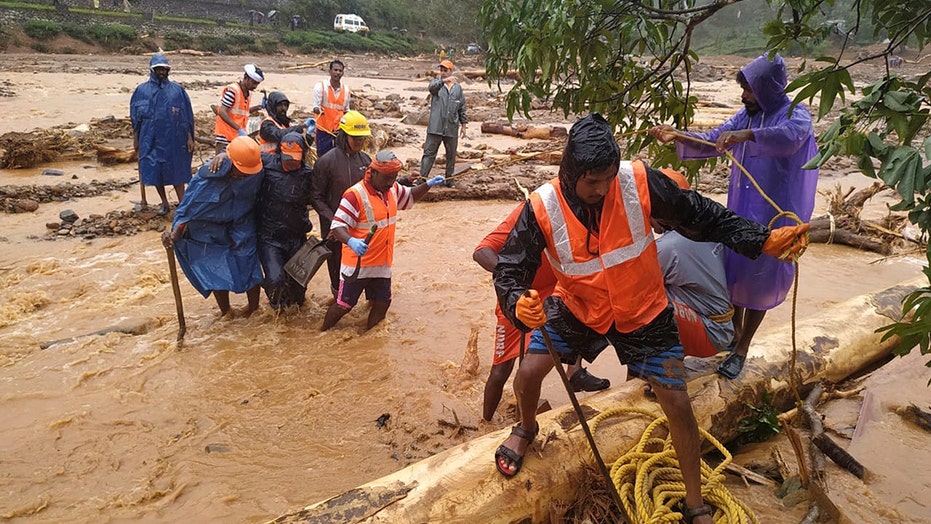 Nearly 150 people have died and more than 400,000 people have been forced to flee their homes following days of torrential rain that triggered catastrophic flooding and mudslides in southern India.

The death toll, which is likely to increase as rescue workers sift through debris, reached at least 147 on Sunday, Reuters reported, citing state officials. On Monday, reports said up to 165 people had been killed, according to SkyNews.

Heavy rain and landslides ravaged the state of Kerala, the worst-hit area, where the death toll rose to at least 57 over the weekend, Chief Minister Pinarayi Vijayan said. More than 165,000 people in the state left their homes to be relocated in one of the 1,111 relief camps.

A flooded area of Malappuram district, Kerala as seen from an Indian Navy helicopter Sunday.  (Indian Navy via AP)

“Several houses are still covered under 10-12 feet deep mud. This is hampering rescue work,” Vijayan said, according to Reuters.

Meteorologists have said torrential rains are still likely to hit Kerala over the next two days, India Today reported.

In neighboring Karnataka, at least 48 people have died, with 12 still missing, according to the news outlet. At least 235,000 people fled their homes in Karnataka to find safer areas, officials said.

While Kerala and Karnataka were considered the worst hit this year, flooding and landslides also ravaged several other states.

In Maharashtra, at least 43 people have died, while at least 31 were killed in Gujarat, according to India Today. A mother and her 9-month-old daughter were reportedly among six people buried alive in landslides across three different villages in Uttarakhand.

At least five others were reported dead in rain-related accidents in Tamil Nadu state.

India suffered catastrophic floods a year, ago when heavy downpours in Kerala killed 223 people and drove hundreds of thousands from their homes.