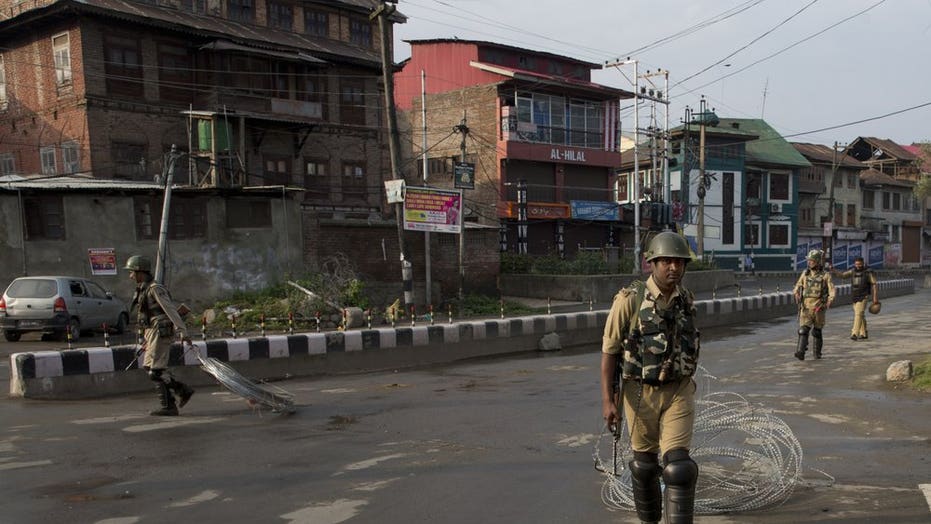 Indian security forces have arrested at least 500 people in Kashmir since the Hindu nationalist government instituted a blackout and lockdown in the disputed region.

The crackdown comes as the Indian government decided this week to revoke the Kashmir region’s autonomy and downgraded it from statehood to a territory.

Pakistan, which also claims the Kashmir region in full, on Thursday suspended a key train service with India over the change in Kashmir’s special status by New Delhi, as tensions between the two rivals soared.

In this Tuesday, Aug. 6, 2019 photo, a Kashmiri municipal worker pushes his cart filled with trash as Indian paramilitary soldiers patrol during curfew in Srinagar, Indian controlled Kashmir, Wednesday, Aug. 7, 2019. Authorities in Hindu-majority India clamped a complete shutdown on Kashmir as they scrapped the Muslim-majority state's special status, including exclusive hereditary rights and a separate constitution, and divided it into two territories. (AP Photo/Dar Yasin)

The Pakistani government on Wednesday downgraded diplomatic ties and halted trade with India in response to India’s actions.

At least for the time being, Islamabad isn’t considering any military actions and instead is looking at political and legal options to challenge India’s changes to disputed Kashmir’s status, said Pakistan’s foreign minister Shah Mahmood Qureshi.

State-run All India Radio, which first reported on the mass arrests, said cross-border firing by Indian and Pakistani troops hit the Rajouri sector of the Indian-controlled Kashmir late Wednesday.

Some activists raised concerns about the lockdown of the region as some residents are unable to even call an ambulance as their access to phones is cut off.

India criticized Pakistan’s reaction to the situation in Kashmir, saying in a statement that “the intention behind these measures is obviously to present an alarming picture to the world of our bilateral ties,” but noted that it’s not surprising as Pakistan “has used such sentiments to justify its cross-border terrorism.”

Indian Paramilitary soldiers drag barbwire as they prepare to impose curfew in Srinagar, Indian controlled Kashmir, Wednesday, Aug. 7, 2019. Authorities in Hindu-majority India clamped a complete shutdown on Kashmir as they scrapped the Muslim-majority state's special status, including exclusive hereditary rights and a separate constitution, and divided it into two territories. (AP Photo/Dar Yasin)

India and Pakistan have fought three wars in total for the control of Kashmir, India’s only Muslim-majority state where most people oppose Indian rule.

The Pakistani government said it will ask the United Nations to pressure India to reverse the move to downgrade Kashmir from a state to two separate territories.