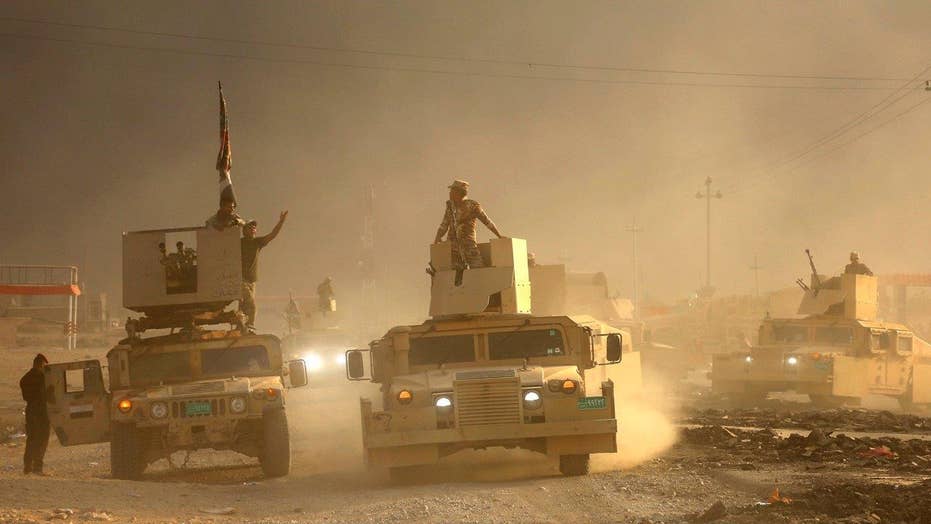 ISIS leader al-Baghdadi may be holed up in Mosul

As U.S.-backed Iraqi forces close in on the Islamic State's hub of Mosul, the leader of the terror network has become so insecure about his own safety that he refuses to emerge from his underground hideouts and never sleeps without his suicide vest on, Reuters reported.

Abu Bakr al-Baghdadi "has become intemperate," losing self-control and showing more signs of paranoia, according to messages sent from inside Mosul to the Iraqi military. Reuters reported Wednesday it had viewed the messages.

Meanwhile, al-Baghdadi "has cut down on his movements and neglects his appearance," according to the message from the person inside Mosul. "He lives underground and has tunnels that stretch to different areas. He doesn't sleep without his suicide bomber vest so he can set it off if he's captured."

Two weeks ago, al-Baghdadi released a new message urging his followers to keep up the fight for Mosul. His rallying cry came in a sermon-like recording, more than half an hour long, distributed by the militant group's al-Furqan media arm. It was not clear when the recording was produced.

The city of more than one million people and the surrounding territory fell to ISIS fighters during the militant group's surprise attack in June 2014. Al-Baghdadi visited the city soon after the takeover, and from inside Mosul declared an Islamic caliphate that at one point covered nearly a third of Iraq and Syria.

In his recording, al-Baghdadi rallied his fighters — especially in Mosul — and called on them to obey orders while remaining resilient and steadfast.

"Oh you who seek martyrdom! Start your actions! Turn the night of the disbelievers into day," he says, according to a translation provided by the SITE Intelligence Group, a U.S. organization that monitors militant activity online, which reported the al-Baghdadi recording first.