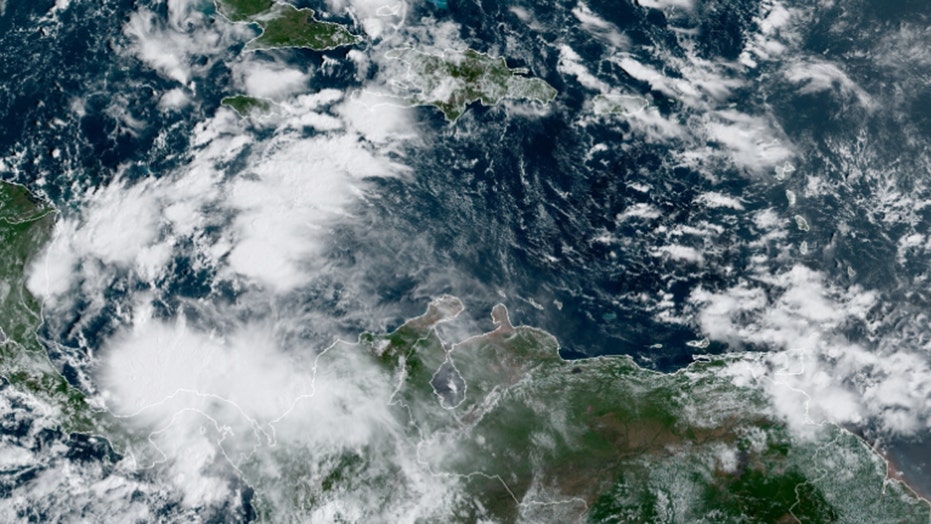 After a lull in the busy 2020 Atlantic hurricane season, forecasters on Wednesday are monitoring an area of disturbed weather over the Caribbean that may become the next named storm.

The National Hurricane Center (NHC) in Miami said it's keeping tabs on a tropical wave currently located over the Caribbean Sea.

"A tropical wave over the west-central Caribbean Sea could become a tropical depression during the weekend while moving slowly west-northwestward over the northwestern Caribbean Sea," the NHC tweeted.

Forecasters said the system will move westward over the next couple of days and interact with a frontal system, producing a "broad area of low pressure over the western Caribbean Sea by Thursday night or Friday."

An area of disturbed weather over the Caribbean Sea could develop into a tropical system by the weekend, accoridng to forecasters. (NOAA/GOES-East)

"Environmental conditions are forecast to be conducive for some development thereafter, and a tropical depression could form over the weekend while the system moves slowly west-northwestward over the northwestern Caribbean Sea," the NHC said.

The National Hurricane Center (NHC) says there is a 60% chance the system develops by the weekend. (NHC)

While the NHC only gives a 10% formation chance over the next 48 hours, that increases to a 60% chance of development by the weekend.

If the system does develop into a tropical storm, it would have the name Gamma and be the 24th named storm of the 2020 Atlantic season.