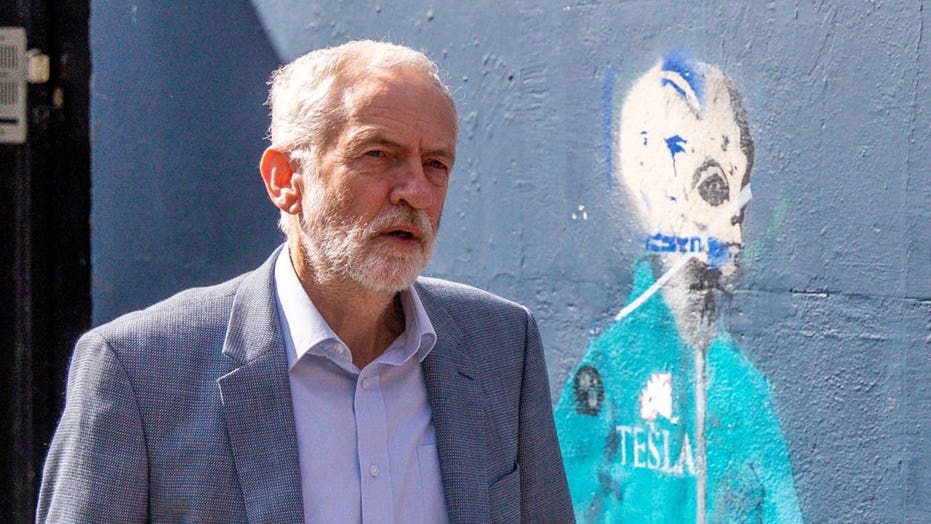 Hamas said in a statement on Thursday, “We have received with great respect and appreciation the solidarity message sent by the British Labor Party Leader, Jeremy Corbyn, to the participants in the mass rally that took place in central London last Saturday in commemoration of the 71st anniversary of Nakba.”

Demonstrations known as "Nabka" — or "catastrophe" — mark when hundreds of thousands of Palestinians escaped or were forced out of their homes during the 1948 war that surrounded the creation of Israel. On Saturday, thousands protested in central London to demand an end to the “unprecedented attacks” against the Palestinian people at the hands of Israel, The Guardian reported.

Allegations of anti-Jewish prejudice within Labour have grown since Corbyn, a veteran socialist, was elected leader in 2015.

On Saturday, Corbyn posted his message “to those on the National Demonstration for Palestine in London” writing on Facebook, “We cannot stand by or stay silent at the continuing denial of rights and justice to the Palestinian people.”

“The Labour Party is united in condemning the ongoing human rights abuses by Israeli forces, including the shooting of hundreds of unarmed Palestinian demonstrators in Gaza - most of them refugees or families of refugees - demanding their rights,” Corbyn said.

He then referenced the violence near the Israel-Gaza border earlier this month where 25 Palestinians, and four Israelis were killed when Palestinian militants in the Gaza Strip fired more than 600 rockets into southern Israel in less than 24 hours, and Israel retaliated with dozens of airstrikes against militant sites in Gaza.

“The silence of many governments, including our own, has been deafening. The UK government should instead unequivocally condemn the killing of demonstrators – including children, paramedics and journalists – and other civilians, and freeze arms sales to Israel,” Corbyn said.

“We stand in solidarity with the Palestinian people and their struggle for their rights, supported by Israeli peace and justice campaigners.”

Corbyn also brought up the Trump administration’s so-called “Deal of the Century,” for potential peace between the Israelis and Palestinians.

“If President Trump’s Middle East plan is, as expected, an attempt to bury the Palestinians’ right to a viable state alongside Israel, we will call on our government and the international community to reject it decisively.”

Hamas responded to Corbyn's statements on Thursday saying, “In his message, Mr. Jeremy Corbyn condemned the Israeli occupation forces' shooting at unarmed Palestinian demonstrators in Gaza who were calling for their rights to be recognized. He stressed that peace cannot be achieved with the continued illegal occupation of the Palestinian territories.”

Hamas added that Corbyn’s message “expresses support and solidarity with the Palestinian people and their inalienable rights to freedom, independence and self-determination.”

“It also condemns the ongoing occupation and its crimes against our people, and reflects an advanced moral and political position worthy of all praise and thanks.”

On Thursday Hamas also said they “salute” Corbyn’s position “in rejecting the so-called Trump Plan for the Middle East or the 'Deal of the Century' if it was based on erasing Palestinian rights, primarily the right to an independent state.”

Jason Greenblatt, the U.S. envoy for international negotiations, gave some clues on Saturday of what to expect from the Trump administration’s Middle East plan.

Greenblatt has been working on the plan with Jared Kushner, the plan’s lead architect, and U.S. Ambassador to Israel David Friedman for the last two years. He anticipated that it won’t be released until at least after Ramadan, the formation of a new Israeli government and the Jewish holiday of Shavuot, which ends on the evening of June 10th.

Hamas said on Thursday, “We emphasize that no peace plan can succeed at the expense of the rights of the Palestinian people, that the Palestinians will not allow this deal to pass, and that it will be doomed to failure.”

Hamas added, “We also call on the current British government to stop supporting the Israeli occupation state and to listen to the voice of wisdom and reason and adopt policies in support of the Palestinian legitimate rights that will lead to stability in this vitally important and highly turbulent region.”

There are an estimated 5 million Palestinian refugees across the Middle East. Their fate is one of the core issues of dispute between Israel and the Palestinians. Israel rejects demands for a mass return of refugees to long-lost homes, saying it would threaten the country's Jewish character.

When Fox News contacted Corbyn for comment and confirmation that he holds the views expressed in the Hamas statement, a Labour Party spokesperson responded saying, "Jeremy has a long and principled record of solidarity with the Palestinian people. That is the right thing to do."

Some in the Labour party allege Corbyn, a longtime critic of Israel's treatment of Palestinians, has allowed anti-Semitic abuse to go unchecked, according to the Associated Press.

Corbyn also has received personal criticism for his past appearances alongside alleged anti-Semites and for some of his statements, including a 2010 speech in which he compared Israel's blockade of Gaza to Nazi Germany's sieges of Leningrad and Stalingrad during World War II.

Last August, Israeli Prime Minister Benjamin Netanyahu tore into the British Labour Party leader after images surfaced of Corbyn laying a wreath near the graves of a terrorist group who killed 11 Israelis at the 1972 Munich Olympics.