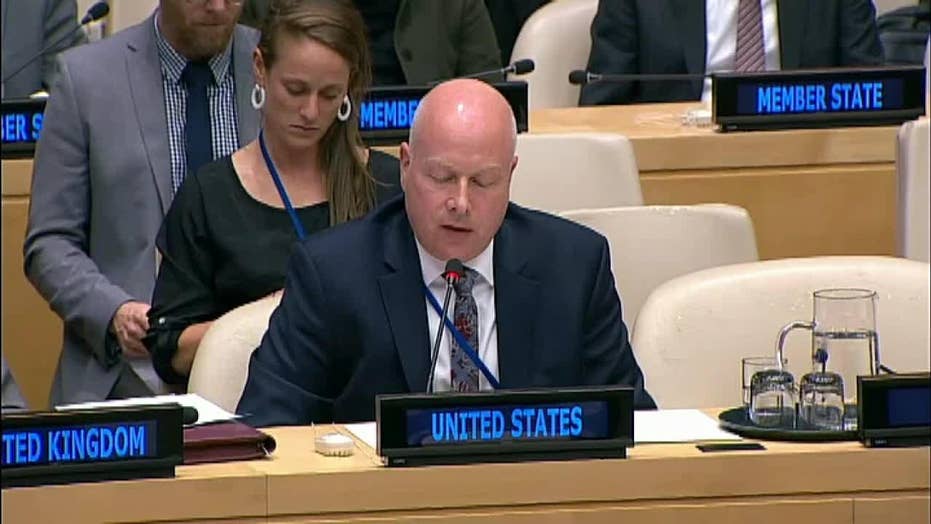 With predictions swirling as to what’s in the Trump administration’s so-called “Deal of the Century,” for potential peace between the Israelis and Palestinians, Jason Greenblatt, the U.S. envoy for international negotiations, gave some clues this week of what to expect.

“One thing we won’t do, the Trump administration won’t compromise on Israel’s security,” he told Fox News.

Greenblatt was in New York Thursday as a surprise speaker at yet another U.N. meeting organized to condemn Israel. The informal Security Council meeting heard from the Palestinian foreign minister and anti-Israeli academics as well as council members.

“I’m not a believer in boycotts but in engagement,” he told Fox News. Greenblatt noted the day of the meeting was deliberately antagonistic given that it was held on Israel’s Independence Day and just a matter of days after 700 rockets were fired into Israel from Gaza.

“It’s outrageous to hold a meeting like this without addressing the attacks on Israel. This from a body who would not condemn Hamas several months ago.”

Greenblatt has been working on it with Jared Kushner, the plan’s lead architect, and U.S. Ambassador to Israel David Friedman for the last two years. He anticipated that it won’t be released until at least after Ramadan, the formation of a new Israeli government and the Jewish holiday of Shavuot, which ends on the evening of June 10th.

Asked about the Palestinian leadership’s decision to dismiss the deal before even seeing it -- its U.N. ambassador called it “dead on arrival” -- Greenblatt maintained that he was “hopeful for the sake of the Palestinian people that they get a chance to see it.”

“It’s terribly frustrating for ordinary Palestinians. I meet with them frequently, and this is the message they tell me. They understand they may not like aspects of the plan but are upset that their leaders are saying they won’t even take a look at it. I feel terrible for the Palestinian people.”

Despite the negative echo from its leadership, Greenblatt said he hoped the Palestinian Authority would be engaged in a professional and constructive way, “and help us cross the finish line."

"But of course it is their choice to continue on the road of rejection at the expense of everyday Palestinians," he said. "If they fail to engage constructively and professionally to see if a deal can be reached then shame on them.”

Greenblatt said the plan deals with all the core issues, and despite what critics have said without even having seen it, it covers both political and economic fronts.

Greenblatt said it’s “false to say that it’s only an economic plan. It’s both political and economic. Once everyone has read and given their thoughts on it, there is still a long way to go before a final signing agreement, and that will be up to the parties themselves to negotiate.”

During his speech at the Security Council on Thursday Greenblatt reiterated that the plan will be presented soon and that for now, “We will continue to speak the truth, even where it is not welcome.”

He also made clear at the meeting that new thinking was needed. “The sad truth is that saying the same things, repeating the same tired talking points, but not identifying a realistic way forward, has not and will not lead to peace -- Ever!”

While each previous peace plan has failed, perhaps this one might catch the attention and support of ordinary people on both sides of the conflict.

“It deals with all the core issues. We have developed solutions for each point. So whether you are a teenager or 100 years-old you will see what the consequences are for each point, the good and the bad, and have a real sense of what peace could look like,” he said.

Ben Evansky reports for Fox News on the United Nations and international affairs. He can be followed @BenEvansky.