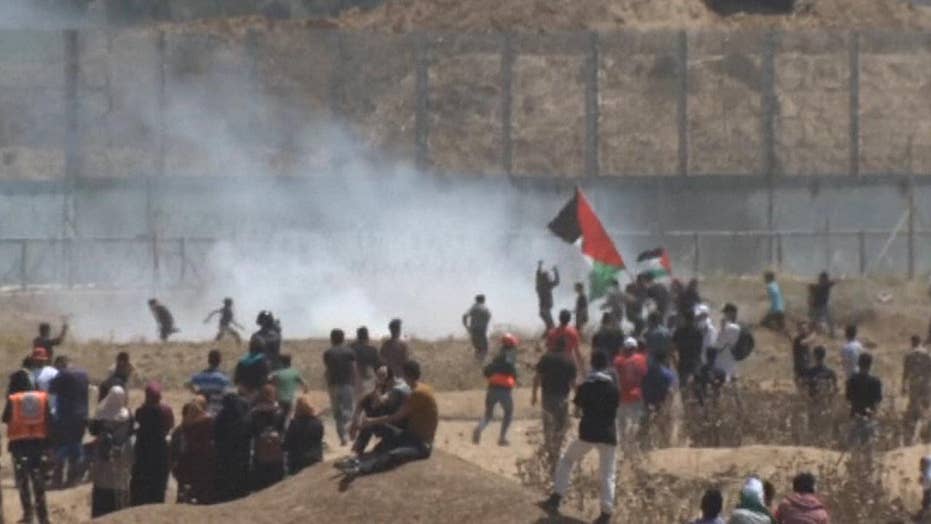 Thousands of Palestinians protest at the Israel border to mark Nakba

Raw video: Palestinians protest at the Gaza-Israel border on the 71st anniversary of their mass displacement during the 1948 war.

About 65 Palestinians were injured, 1 seriously, on Wednesday as they protested across the West Bank and Gaza to mark 71 years after their mass displacement during the 1948 war, officials said.

The demonstrations are known as the "nabka" — or "catastrophe" — marking when hundreds of thousands of Palestinians escaped or were forced out of their homes during the war that surrounded the creation of Israel.

On Wednesday the Israel Defense Forces tweeted a picture of the violence and wrote, "RIGHT NOW: Palestinians in Gaza violently rioting along Israel's border fence launched incendiary devices into Israel setting this field ablaze. These are terrorist-backed violent riots and they endanger the lives of innocent civilians. 'Peaceful protesters' don’t start fires."

The militant group Hamas canceled classes in the Gaza Strip on Wednesday to send children to “riot” violently against Israel, the IDF said earlier.

The Times of Israel reported this year’s Nabka Day protests were “substantially tamer” than the previous year's demonstrations, which coincided with the opening of the U.S. Embassy in Jerusalem after it had been relocated from Tel Aviv. Last year, 62 Palestinians were reportedly killed, 53 of whom were later claimed as members of terror groups, including 8 who died in a gun battle with IDF troops.

"The rioters are setting tires on fire and hurling rocks. A number of explosive devices have been hurled within the Gaza Strip, as well, and a number of attempts have been made to approach the security fence. IDF troops are responding with riot dispersal means," the Israeli military said.

Palestinians attend a protest by the Israeli border with Gaza Strip, Wednesday, May 15, 2019. (AP Photo/Muhammed Dahman)

The demonstration comes two weeks after a cease-fire was reached to end two fierce days of fighting. A Qatari envoy, who has been helping mediate the cease-fire, has urged Hamas to keep Wednesday's demonstration restrained.

There are an estimated 5 million Palestinian refugees across the Middle East. Their fate is one of the core issues of dispute between Israel and the Palestinians. Israel rejects demands for a mass return of refugees to long-lost homes, saying it would threaten the country's Jewish character.