Nikki Haley, the United States ambassador to the United Nations, is looking the Security Council to act toward the repatriation of nearly 700,000 Rohingya refugees who were forced to flee Burma to neighboring Bangladesh following a major military crackdown last August on the mostly Muslim population in Rakhine State.

The meeting was called by the United Kingdom and seven other countries including the U.S., France, the Netherlands and Kazakhstan. The focus was on the repatriation of the nearly 700,000 Rohingya refugees who were forced to flee Burma to neighboring Bangladesh following a major military crackdown last August on the mostly Muslim population in Rakhine State. Burma is also known as Myanmar.

Haley told the Security Council that, “The world is watching and waiting for Burma to act. What we have seen so far is cruel and barbaric.”

Haley also called for the release of two Reuters journalists who were arrested in December by Burmese authorities after they reported on evidence of a September massacre and the discovery of mass graves in a fishing village that took place last September. Haley said they remain in prison without bail: “We strongly call for their immediate and unconditional release.” 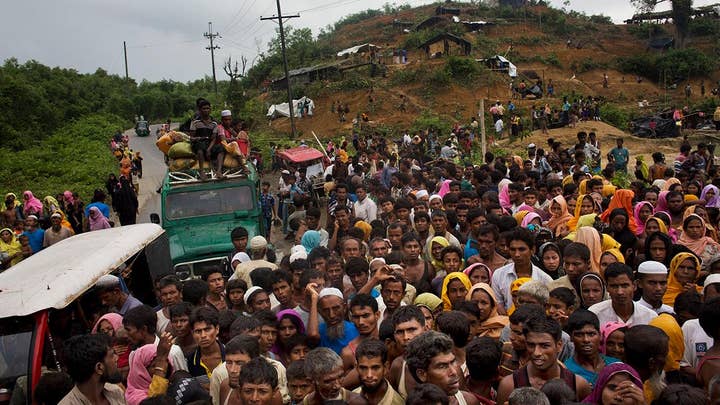 Haley also cited a report from The Associated Press that indicated Burmese soldiers had poured acid on the face and hands of the dead in mass graves to prevent them from being identified.

The U.S. ambassador then took aim at the Security Council: “Unfortunately, the Security Council has so far failed in its responsibility to act in response to the clear threat to international peace and security that has resulted from recent events in northern Rakhine State. We cannot look the other way in this situation. What happened in Burma and is still happening in Burma is not okay.”

She continued, “I urge my colleagues to seize this opportunity to end our inaction and live up to our responsibilities as members of this Security Council. I call on all nations to join the United States in doing more than just demanding an end to the atrocities in Burma, but actually taking the steps we know are needed to put this crisis on the path toward solution.”

In December the U.S. sanctioned a Burmese general
who stood accused of commanding the crackdown against the Rohingyas.

Burma’s U.N. Ambassador Hau Do Suan said he was confident that his country and Bangladesh were working closely with Bangladesh for the safe repatriation of refugees as agreed in a bilateral agreement signed between the two countries in October.

He said that his country recognized freedom of the press and claimed that the two Reuters journalists were not arrested for their reporting.

“The two reporters are charged under Official Secret Act for illegally possessing confidential government documents. Every citizen is bound by the existing law of land,” he said.

He also noted that the reporters supposedly have full legal rights as defendants, but did not guarantee their release as demanded by several councilmembers.

Critics have accused China and Russia of protecting Burma from any meaningful Security Council action against it.

Russia’s Deputy U.N. Ambassador Dmitry Polyansky complained that the topics covered in the meeting required expert analysis and criticized what he said was “using labels and attempts to use contradictory and subjective reports that the media often drawn up in haste to find out who is guilty and (to) condemn them only moves us farther away from a solution.”

Great Britain’s Deputy U.N. Ambassador Jonathan Allen, whose country has given close to $82 million in aid to help with the refugee crisis, said the Security Council had played “a vital role in shining a spotlight on the situation and in encouraging action by the authorities on the ground.”

He said, “We must not turn away or become distracted. … We must be ready to take further action.”