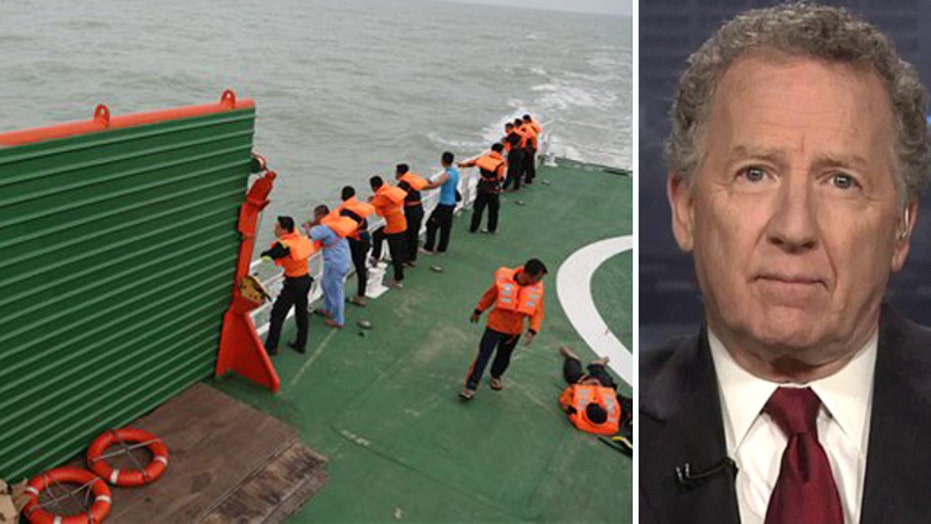 As weather improves, divers will make another attempt on Monday to locate large objects on the ocean floor believed to be the fuselage of the crashed AirAsia flight that killed all 162 on board.

Indonesia’s National Search and Rescue director of operations, Suryadi B. Supriyadi said five large objects — the biggest measuring 59 feet long and 18 feet wide and believed to be the fuselage — have been detected.

Supriyadi said that officials expect that many passengers and crew will be found trapped inside.

At least five ships with equipment that can detect the plane’s black boxes have been deployed to the area where the suspected plane parts were spotted, according to Supriyadi.

"If it cannot be done by divers, we will use sophisticated equipment with capabilities of tracking underwater objects and then will lift them up," Supriyadi said.

He added that officials expect that many passengers and crew will be found trapped inside.

"But today's searching mission is still, once again, depends on the weather," he said.

Divers tried to reach the site on Sunday, but rough seas stirred up silt and mud, leaving them with zero visibility.

Also Sunday, emotionally exhausted family members sang and cried at a tiny chapel in Surabaya, the city where Flight 8501 departed from Dec. 28. The Rev. Philip Mantofa, who heads the congregation at Mawar Sharon Church — where more than a quarter of the victims were members — urged those gathered to find comfort in their faith.

"If God has called your child, allow me to say this: Your child is not to be pitied," Mantofa said, locking eyes with a grieving father seated in the front row. "Your child is already in God's arms. One day, your family will be reunited in heaven."

It is not known what caused the Singapore-bound plane to crash into the Java Sea 42 minutes after taking off on what was supposed to be a two-hour flight. Just before losing contact, the pilot told air traffic control that he was approaching threatening clouds, but was denied permission to climb to a higher altitude because of heavy air traffic.

Surabaya, Indonesia's second-largest city, has been gripped by grief as bodies, one by one, continue arriving in simple, numbered coffins after being painstakingly pulled from the water. Four more bodies were brought to shore on Sunday, raising the total to 34.

The crash of Flight 8501 has triggered an intensive international search-and-recovery operation involving 20 planes and helicopters along with 27 ships from Indonesia, Japan, Malaysia, Singapore and the United States. All have been desperately searching for the all-important black boxes, pieces of the Airbus A320 and corpses.

The investigation got a boost over the weekend when sonar equipment identified five large objects on the seabed in the search area, but no images have been captured confirming they are part of the aircraft. Suspected plane parts also were seen scattered on beaches during an aerial survey.

While it remains unclear what caused the plane crash, bad weather appears to have been a factor, according to a report by Indonesia's Meteorology, Climatology and Geophysics Agency.

Indonesian authorities have also announced the grounding of AirAsia flights from Surabaya to Singapore, with the Transport Ministry saying the airline did not have a permit to fly on Sundays. However, Singapore's Civil Aviation Authority said that from its end, the airline had been approved to fly the route daily.

While Indonesia is predominantly Muslim, many of the plane's passengers were Christians of Chinese descent. The Rev. Mantofa's congregation was hit particularly hard, with 45 of the crash victims — from 13 families — belonging to his large Pentecostal church.