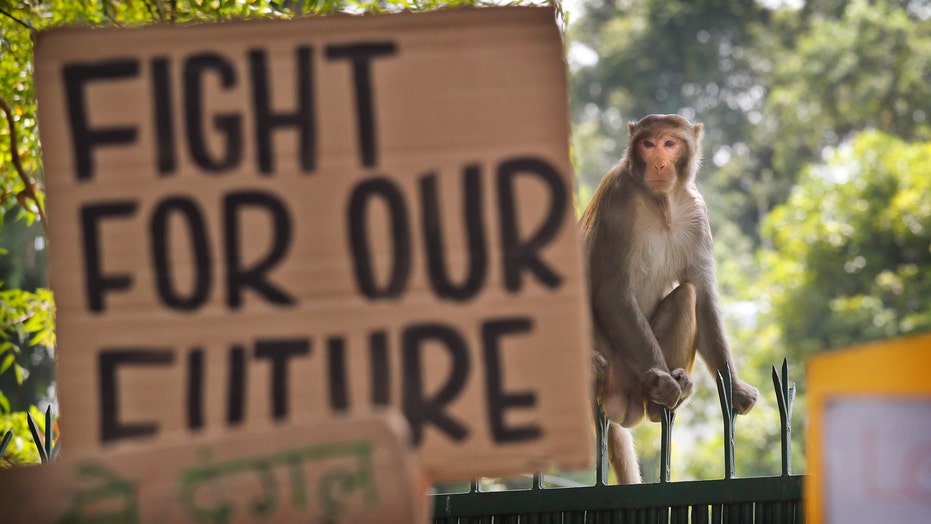 The worldwide climate protest partially inspired by Swedish teenager Greta Thunberg kicked off Friday in major – and smaller – cities around the globe Friday with hundreds of thousands of students hitting the streets.

In India’s capital of New Delhi, a crowd of a few dozen people quickly swelled to several hundred outside the city’s historic Lodhi garden, a sprawling park that is home to medieval royal tombs.

“What do we want? Climate justice! When do we want it? Now!” they chanted as they walked down the street.

“We need to reclaim our constitutional right to clean air and water,” said Aman Sharma, a 16-year-old protester in New Delhi.

Climate protesters demonstrate outside the local government legislature's offices in Johannesburg, South Africa, Friday, Sept. 20, 2019. Protesters around the world joined rallies on Friday as a day of worldwide demonstrations calling for action against climate change began ahead of a U.N. summit in New York. (AP)

Australia, with more than 300,000 protesters taking to the streets around the country, saw its largest demonstration since the start of the Iraq War in 2003.

“Even though we ourselves aren’t sick, the planet which we live on is, and we are protesting and fighting for it,” Siobhan Sutton, a 15-year-old student at Perth Modern School in the west coast city of Perth, told the AP.

She said she would fail a math exam by attending the protest.

Climate protesters demonstrate in London, Friday, Sept. 20, 2019. Protesters around the world joined rallies on Friday as a day of worldwide demonstrations calling for action against climate change began ahead of a U.N. summit in New York.  (AP)

"I have basically been told that because it is not a valid reason to be missing school — it is not a medical reason or anything — I am going to get a zero on the test if I don't actually sit it," Sutton said.

Thunberg, who has staged weekly demonstrations under the heading “Fridays for Future” over the past year, has been calling on world leaders to step up their efforts against climate change. She is expected to speak at the U.N. Climate Action Summit in New York City on Monday.

Environmental activists, mostly students, display their message in front of "a human globe" formation to coincide with the global protests on climate change Friday, Sept. 20, 2019, at the University of Philippines campus in suburban Quezon city northeast of Manila, Philippines. Various environmental groups in the country are participating in what is expected to be the world's largest mobilization on climate change known as "Global Climate Strikes."  (AP)

Rallies were expected in major cities across Asia, Europe, Africa, and the United States, where organizers say more than 800 events are expected Friday.

In Germany, which has seen large-scale climate rallies for over a year, police said 17,000 people had gathered in the southwestern city of Freiburg, one of 500 cities across the country where protests were planned.

In the capital Berlin and Germany's financial hub of Frankfurt, some protesters staged brief road blockades to highlight their demands for a drastic reduction in the country's greenhouse gas emissions, to which transport is a major contributor. Photos from Berlin showed three people standing over ice blocks under gallows.

Three persons stand on ice blocks under gallows to protest against the climate policy prior to a 'Friday for Future' climate protest in front of the Brandenburg Gate in Berlin, Germany, Friday, Sept. 20, 2019.  (AP)

Across London, hundreds of schoolchildren descended outside Westminster to make their voices heard. The Metropolitan Police tweeted that it had already arrested two protesters on alleged public order offenses.

In the Afghan capital Kabul, about 100 young people - with several young women in the front carrying a banner emblazoned with "Fridays for Future," marched in the city.

Fardeen Barakzai, one of the organizers and head of the local save-the-climate group called Oxygen said "we want to do our part. We as the youth of our country know the problem of climate change. We know war can kill a group of people ... the problem in Afghanistan is our leaders are fighting for power but the real power is in nature."

Climate protesters demonstrate in London, Friday, Sept. 20, 2019. Protesters around the world joined rallies on Friday as a day of worldwide demonstrations calling for action against climate change began ahead of a U.N. summit in New York. (AP Photo/Frank Augstein)

Supporting the demonstrators were mayors from across the world – including Paris, Los Angeles, New York City, Copenhagen, and London – who issued a strongly worded joint statement overnight.

“Our shared planet is facing a climate emergency. The science is clear that, without urgent action, sea levels will rise further, extreme temperatures will become the norm and climate-related disasters will inflict even greater damage,” they said. “When your house is on fire, somebody needs to sound the alarm. Young people in our cities, displaying incredible maturity and dignity are doing just that. School children are taking to the streets, drawing attention to the terrifying threat that climate breakdown poses to their future.”

Around a thousand protesters march to demand action on climate change, in the streets of downtown Nairobi, Kenya Friday, Sept. 20, 2019. Protesters around the world joined rallies on Friday as a day of worldwide demonstrations calling for action against climate change began ahead of a U.N. summit in New York. (AP)

Experts say Africa is the most vulnerable continent to climate change and the least equipped to deal with it. Governments have pleaded for more support from the international community.