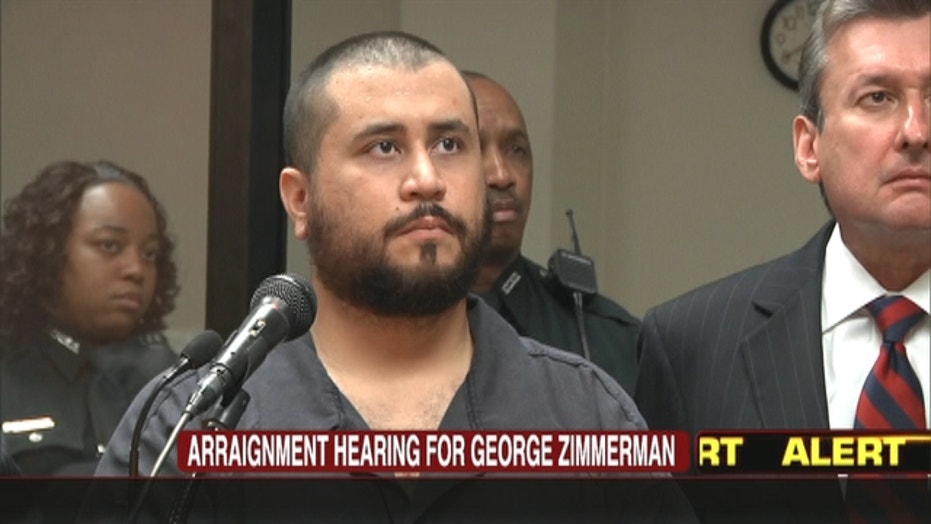 The judge set George Zimmerman's bond at $9,000 and ordered that he not possess guns or ammunition. He was ordered to stay away from the girlfriend's house and wear a monitoring device.

Sanford, Fla. (AP) – George Zimmerman's girlfriend said he tried to choke her about a week ago during an altercation that wasn't initially reported to police, a prosecutor told a judge Tuesday during his first court appearance on domestic violence-related charges.

The prosecutor said Zimmerman's girlfriend, Samantha Scheibe, was in fear for her life because Zimmerman mentioned suicide and said he "had nothing to lose." Zimmerman's public defenders said after the hearing that he didn't appear to be suicidal.

Judge Frederic Schott set Zimmerman's bond at $9,000 and ordered that Zimmerman stay away from Scheibe's house, wear a monitoring device and refrain from contact with her. The judge says he can't possess guns or ammunition or travel outside of Florida.

Schott said that Zimmerman's previous brushes with the law weren't a factor in the conditions he was imposing. Zimmerman was acquitted of all charges earlier this year in the fatal shooting of teenager Trayvon Martin in a case that drew worldwide attention.

Defense attorneys said after the hearing that they expect him to be out of jail on Wednesday, and they're confident he'll eventually be acquitted.

"I would think it would be difficult for George Zimmerman to get a job in central Florida," Dowdy said.

Dowdy and another public defender, Daniel Megaro, said Zimmerman wasn't suicidal despite what the prosecutor said.

In this latest scuffle on Monday, both Zimmerman and the woman he was arguing with called 911 and provided dueling descriptions to police dispatchers about the argument.

Scheibe told deputies the ordeal started with a verbal argument and that she asked Zimmerman to leave the house. Her account in the arrest report says he began packing his belongings, including a shotgun and an assault rifle. She says she began putting his things in the living room and outside the house, and he became upset. At that point, the report says, he took the shotgun out of its case.

Zimmerman told his girlfriend to leave and smashed a pair of her sunglasses as she walked toward the front door, the report says. Scheibe told deputies he pushed her out of the house when she got close to the door.

Moments later, Zimmerman called 911 from inside the barricaded house to tell his side of the story.

"I have a girlfriend, who for lack of a better word, has gone crazy on me," Zimmerman said.

Zimmerman then said he never pulled a gun on his girlfriend and that it was she who smashed a table at the home they shared. He also told the dispatcher that Scheibe was pregnant with their child and that she had decided she would raise the child on her own. When Zimmerman started to leave, "she got mad," he said.