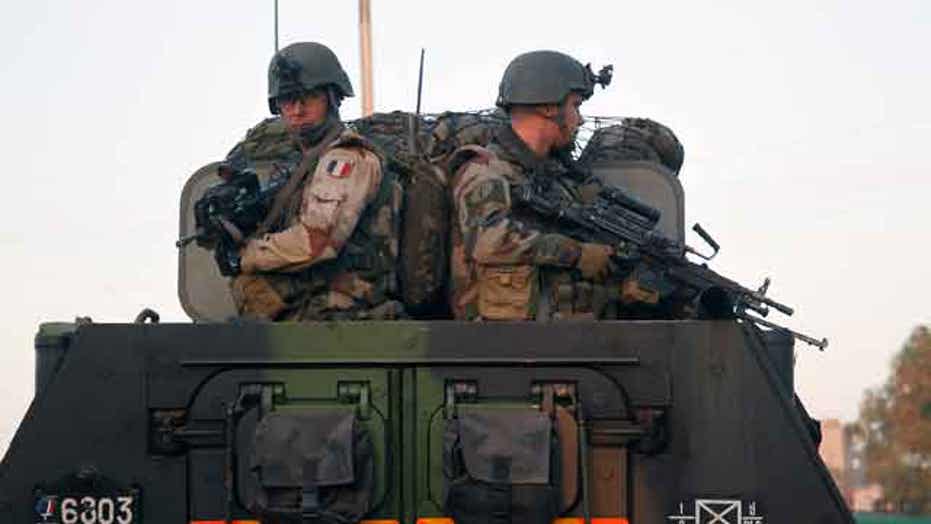 PARIS – France's military campaign to stop advancing Islamist insurgents in Mali has been met with a volley of threats from the extremists, feeding fears that the French could be targeted within their own borders. On Tuesday, as security forces stepped up patrols everywhere from airports to the Eiffel Tower, France's top security official issued a grim warning: the enemy is already here.

France is no stranger to attacks, including those by homegrown terrorists, some with roots in its former colonies. It suffered from bombings in the 1990s linked to the insurgency in Algeria, and just last March, a French-born radical Islamist killed three Jewish children, a rabbi and three paratroopers before being killed himself in a standoff with police.

French President Francois Hollande launched the surprise operation in Mali, a former West African colony, on Friday, with hopes of stopping Al Qaeda-linked and other Islamist extremists he believes pose a danger to the world. The intervention, however, means France now faces a heightened terror threat, including potentially from residents of France who may sympathize with the Islamists' desire for holy war, officials and experts said.

At least two arrests bolster fears that some French have joined or are trying to join the radicals in Mali -- and perhaps return to plot attacks at home.

A 24-year-old French-Malian was arrested in November in Mali, suspected of being a scout to set up a recruiting network. A 27-year-old Frenchman was arrested in August in Niger, allegedly headed to neighboring Mali, and handed over to authorities in France, an official said on condition of anonymity because of a lack of authorization to discuss the case publicly.

Someone proven to be heading to a zone of combat risks being charged in France with preparing an act of terrorism. Valls, the interior minister, told the BFM television channel that "France is watching individuals who want to go to Afghanistan, Syria and the Sahel (region of Africa where Mali is located). We're watching those who could return here."

Mali and Al Qaeda specialist Mathieu Guidere said the French intervention gives substance to threats from militants, such as the statement on Monday by rebels in Mali that France had "opened the gates of hell."

Since seizing Mali's north, the radicals have imposed their harsh version of Islamic law on the public, including using amputations as punishment for alleged crimes.

According to Guidere, the three extremist movements in northern Mali -- Al Qaeda in the Islamic Maghreb, its offshoot the Movement for Oneness and Jihad in West Africa, and Ansar Dine -- have threatened France along with al-Shabab, a Somali Islamist group. Al-Shabab is believed to have killed a French intelligence officer it had held hostage since July 2009 after a failed French raid aimed at saving him that coincided with the start of France's intervention in Mali.

At least seven other French hostages are believed to be held captive in northern Mali, and their fates, too, could be on the line.

Guidere noted that the groups making the threats are not known to have established cells in Europe, but said that people within the normally peaceable Malian diaspora who might oppose the French intervention or others who sympathize with the Islamist radicals' views could decide to strike at France.

"In the short term, I don't think they have the possibility to act, but probably in the coming weeks and coming months it will be a real threat," Guidere said.

Anti-terrorism judge Marc Trevidic told the daily Parisien that Mali had become a priority for "candidates for jihad," or holy war. He also said investigations have been opened into four people suspected of wanting to go to Mali and currently under close surveillance, but that it's impossible to know how many such people have already left France.

"With this military intervention, we're on the front lines. Suddenly, France is a priority target," Trevidic said.

On Tuesday in France, soldiers combed the Paris Metro and other public transportation systems in extra numbers, while patrolling landmarks such as the Eiffel Tower and other public buildings as part of a stepped-up security program. Diplomatic missions and some places of worship also were getting extra surveillance.

The bolstered security measures recall those the French took during the 1990s, when Algerian extremists backed an insurgency by the now-defunct Armed Islamic Groups, which had developed an extensive support network in France. Those anti-terror precautions were boosted again after the deadly London subway bombings in 2005.

The terror threat has in many ways permanently changed the cityscape of the French capital and other urban areas in France. Today, for instance, public garbage cans lining streets are made of transparent plastic instead of the metal cans of old, which were used to deposit bombs in the 1990s spree of attacks.

The French president ordered the intervention in Mali after the Islamist insurgents bore south toward Bamako, the capital. The move upset a plan in the works for months, pushed by France and blessed by the United Nations, for an all-African force to intervene along with Mali's weak army to reconquer the north of the country. That force is still being put together for eventual deployment.

Since talk of an intervention began months ago, Mali's insurgents have added to their ranks, mainly with fighters from the Sahel region. It is not known how many Europeans have gone to the latest frontier of jihad, but Guidere estimated dozens. At least one U.S. citizen was arrested in December while boarding a flight in Atlanta, Georgia, to Morocco with Mali as his alleged final destination.

Evidence that some of the Mali extremists have been in communication with like-minded groups in other countries bodes ill, said Sajjan Gohel, a security and terrorism analyst with the London-based Asia-Pacific Foundation.

"Once you have a dialogue that dialogue can be built on," he said. "Mali has to now feature very highly on the radar for counter-terrorism agencies."