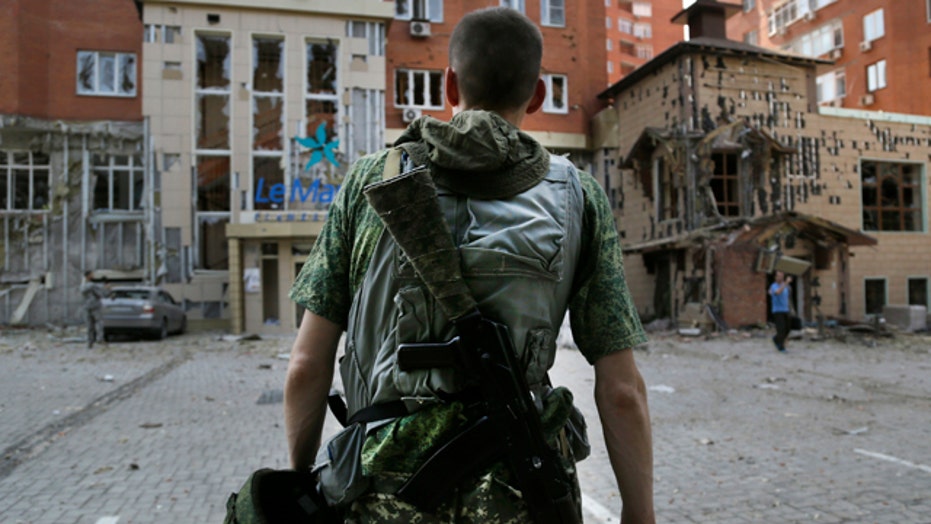 Cut off from the Russian border and under increasing pressure from Ukrainian military forces, the pro-Russian separatists' stronghold of Donetsk could become the flashpoint for a Russian invasion of eastern Ukraine, an expert on U.S. and Russian national security predicted Thursday.

Appearing on Fox News' "Happening Now," Matthew Rojansky, director of the Kennan Institute of the Woodrow Wilson International Center for Scholars, laid out a grim scenario.

Such an emergency could serve as the pretext for open Russian military intervention he said.

"They'll claim it’s just like [the US has] done in the Middle East many times and in other places in the world," Rojansky predicted. "They'll use air power, they'll use rockets, they'll use artillery and they'll say Ukrainians, you must not advance here and they'll enforce that. They have the ability to do it."

Asked how the US should respond to the deepening crisis, Rojansky noted that the White House faces a "prisoner's dilemma."

"We don't want a war. We cannot win a war against Russia. You know, this is not Al Qaeda. This is not the government of Saddam Hussein. This is the Russian Federation, the inheritors of the Soviet Union's nuclear arsenal. We cannot get dragged into this war. But by the same token, the Ukrainians can't win it by themselves."

"If we keep going with sanctions, it's a dead-end process," Rojansky concluded. "We can continue to do it for moral reasons to show that we're doing something, but we've also got to have an endgame negotiation that the Russians are part of."

Further, Rojansky warned, retaliatory rounds of sanctions are dividing the world into two camps: "We're going to need to act quickly on this before sanctions really start to divide us so deeply."