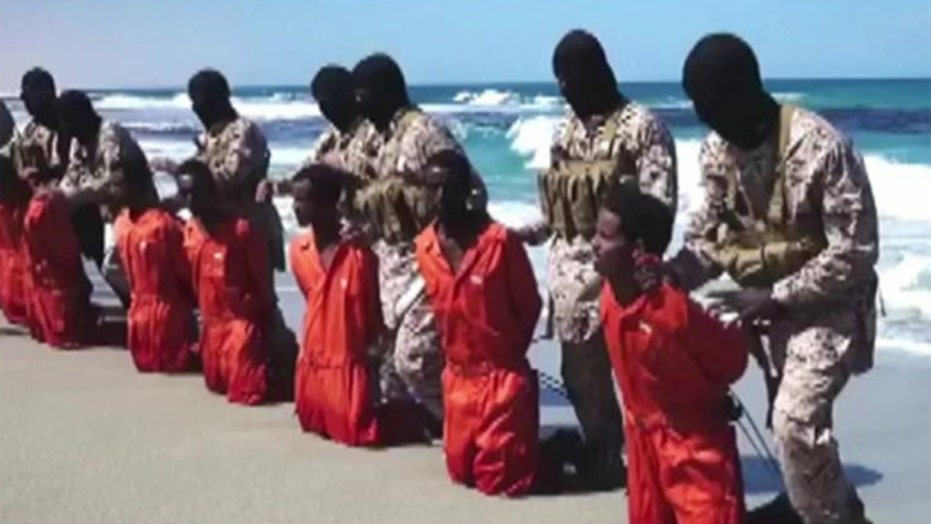 As the warm waters of the Mediterranean Sea lapped onto a clear sandy beach, normally a place for tourists to bathe and relax, exactly one year ago today 20 Coptic Christians and one Ghanaian were martyred at the hands of the brutal followers of Mohammed, known as ISIS or the Islamic State.

Accounts of their initial kidnapping speak of the ISIS demons moving through the facility where the Copts were living demanding to know where the “followers of the cross” were staying.

ISIS, using what the great historian Christopher Dawson called the “black arts of mass propaganda and suggestion,” produced a slick, Hollywood-style video of the execution of the Copts. Dressed in orange jumpsuits, the Copts were made to kneel on the clear sand. Behind each one stood an ISIS executioner, dressed completely in black, because the devil cannot show his face.

One of them, speaking with the guttural accent known as "street" in London, taunted the West, pointing his knife across the ocean, to the coast of Italy just across the sea. Given the latest estimates that up to 16,000 committed jihadists are now in Europe, mingled with the thousands of migrants who have poured over European open borders, those threats seem more real than ever.

As unbearable and unacceptable as it is to actually watch the moment of beheading, this satanic act failed miserably in its purpose. It once again exposed the true face of evil, which a significant number of the followers of the prophet Mohammed accept as legitimate. It proved that the expression of a seventh century interpretation of the Koran is not, as so many wooly liberals say, "nothing to do with Islam."

It has everything to do with Islam. But most significantly, and beautifully, it utterly failed as a means of propaganda and fear for ISIS, because it showed the faith of the martyrs.

Twenty of the martyrs were, as we know, Egyptian Coptic Christians. The nationality and faith of the one African murdered with them was not known for some time. His name was Matthew Ayairga, a Ghanaian, although some have said he came from Chad. He was not a Christian, but, at the moment of execution, knowing he would die, he was asked by one his killers if he would reject Jesus.

He turned to his companions and said, "Their God is my God."

Not since the great persecutions of the early life of the church have we seen such a witness. All the Copts were seen to be saying the name of Jesus: "Jesus is Lord." They were, and are, "martyrs" – witnesses, to the faith of the church – glorious witnesses.

On this, the first anniversary of the martyrdom of the "Saints of Libya," we should be affirmed in the strength and faith these men showed at the moment of death. As our culture sinks ever deeper into triviality and depravity, the example of these poor men, acclaimed by Pope Francis as true martyrs, should inspire all those who claim the name of Christian to greater courage and fortitude.

It should also demand ever greater commitment, not only to defeat the forces of evil Islamic darkness, which perpetrates such crimes, but to aid, empower and liberate our Christian brothers and sisters in the Middle East who are facing a true genocide.

Father Benedict Kiely is a Catholic priest and founder of Nasarean.org, which is helping the persecuted Christians of the Middle East.

Marine Walks Again, with a Little Help from Tech

You’ve Had a Baby. Great. Now Make Some Friends.

10 Smart Brands and Their Good Causes