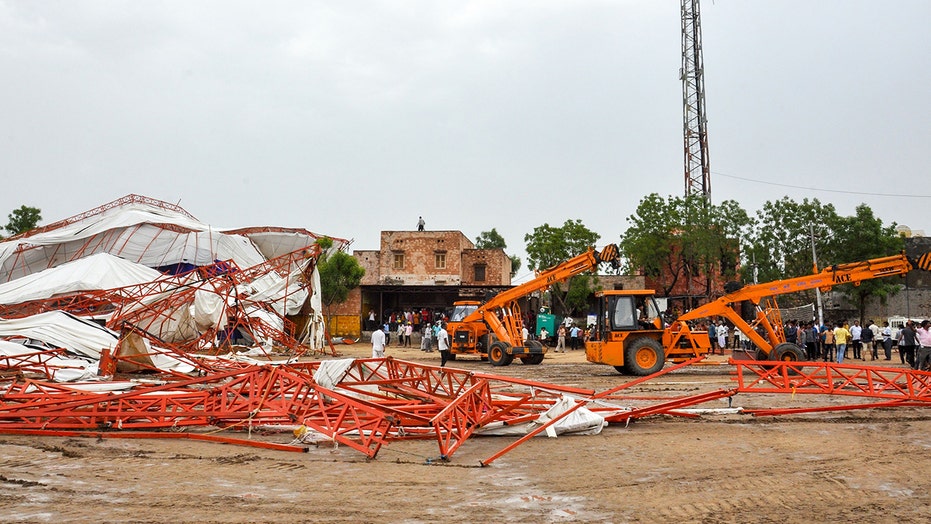 At least 14 people were injured and dozens hurt when heavy rain and a thunderstorm caused a massive tent to collapse in India as a religious event was being held inside on Sunday.

The incident took place in the Barmer district of India’s western desert state of Rajasthan and left 50 people injured.

Niraj Mishra, a sub-divisional magistrate of Barmer district, told Reuters that some people died after being electrocuted by live electricity wires as the tent collapsed, while others were hit by falling debris.

Around 300 people were sitting under the tent when it collapsed, police superintendent Khinv Singh Bhati told the Hindustan Times.

At least 14 people were killed and dozens injured at a religious gathering in northern India on June 23, after strong winds caused a large tent to collapse. (STR/AFP/Getty Images)

Locals had gathered in a village in Barmer district for Ram Katha, a religious ceremony that narrates the glory of Hinduism from the epic Ramayana, according to Sky News.

"My thoughts are with the bereaved families and I wish the injured a quick recovery," he wrote.

Mishra told Reuters that the injured were rushed to area hospitals.  Officials have launched an investigation into the deadly incident.