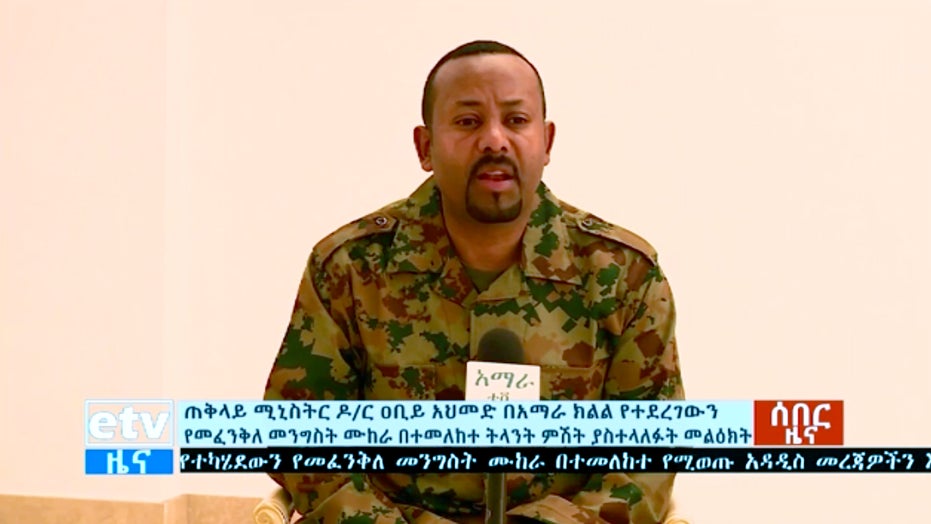 The Ethiopian government thwarted a coup attempt on Saturday that left four people dead, including the president of the Amhara Regional Government and the chief of staff of the Ethiopian Army, the office of the prime minister said on Sunday morning.

During the coup attempt and attack in the Amhara area on Saturday, Ambachew Mekonnen, president of the Amhara Regional Government and Ezez Wassie, an Amhara Regional Government adviser were shot and killed. Ethiopian Army Chief of Staff, Gen. Seare Mekonnen and retired Maj. Gen. Gezai Abera were killed in the capital Addis, at Seare's residence by one of his bodyguards.

Ethiopia's Prime Minister Abiy Ahmed announces a failed coup as he addresses the public on television, Sunday, June 23, 2019. The failed coup in the Amhara region was led by a high-ranking military official and others within the country’s military, the prime minister told the state broadcaster. ((ETV via AP))

The office of  Prime Minister Abiy Ahmed says both attacks were related and carried out by a renegade Brig. Gen. Asaminew Tsige, as well as others. They say many of the individuals have been arrested and an "ongoing operation" is being implemented to capture the remaining accomplices. In Amhara, the coup members attacked a building during a meeting of regional officials, according to Nigussu Tilahun, a spokesman for the prime minister.

"The situation in the Amhara Region is currently under full control by the federal government in collaboration with the tegional government which, in accordance with the constitution, is being led by the Vice President, Lake Ayalew," said the office of the Prime Minister on Sunday.

The Amhara area of Ethiopia has been impacted by political strife over the past three years as separatists battle with Abiy, a new upstart leader who is attempting to get control of the African country.

The leader has released thousands of political prisoners and brokered a peace agreement with Ethiopia’s rival Eritrea. He's also allowed exiled politicians back into the country, including Asaminew, who had been locked away by the previous regime for his opposition stance against the government.

Backlash toward Abiy has been prevalent since he's held the position of prime minister. Just four months into office, a grenade was thrown at Abiy during a rally supporting his changes in Ethiopia. Abiy survived the explosion and nine police officers were arrested.

Ethiopia is Africa's second largest country by population and is a key ally in fighting terror in the Horn of Africa region. Back in 2002, the U.S. Department of Defense issued a warning that terrorists fleeing Afghanistan could be heading for that area.

During the coup attempt on Saturday, access to Internet had been shut down and police checkpoints were placed throughout the capital.

The leader of the coup attempt, Tsige, along with his colleagues, was given amnesty over the last year by Abiy in an attempt to integrate them back to regular life.