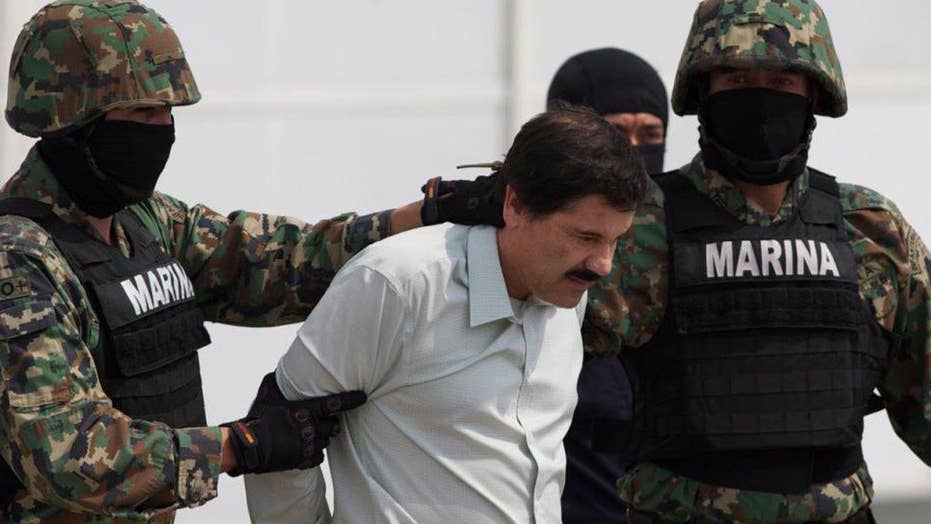 Report: Mexican judge rules El Chapo can be extradited to US

A Mexican judge says the extradition of drug lord Joaquin "El Chapo" Guzman can move ahead, but the country's foreign ministry must still approve it and the defense can appeal.

The federal Judiciary Council said Monday the judge had agreed that the legal requirements laid out in the extradition treaty between the two countries had been met. The judge was not named.

The ministry has 20 days to decide whether to approve Guzman's extradition to the United States. Any extradition attempt can be delayed or stopped by a request to the court by attorneys for the Sinaloa cartel leader.

A Mexican security official told The Associated Press Guzman was moved to a less-secure prison, in a region that is one of his cartel's strongholds.

The official said that in general the Cefereso No. 9 prison on the outskirts of Ciudad Juarez, across from El Paso, Texas, is not as impregnable as the maximum-security Altiplano facility near Mexico City where he had been held. The official wasn't authorized to discuss Guzman's case publicly and agreed to do so only if not quoted by name.

The official said, however, that Guzman is being held in a maximum-security wing where the same protocols are being enforced as in Altiplano, including 24-hour monitoring via a camera in his cell.

But Michael Vigil, the former head of international operations for the U.S. Drug Enforcement Administration, wondered at the logic of sending Guzman to a lesser lockup in territory firmly controlled by his Sinaloa cartel underlings.

"It just doesn't make any sense," Vigil said. "He has that part of his empire, he has the infrastructure there and he has people who would assist him in terms of engineering him another escape."

Officials have not said why they chose Cefereso No. 9 over the 19 other options in the federal penitentiary system for Guzman's surprise, pre-dawn transfer in a high-security operation Saturday.

Altiplano is considered the country's highest-security prison, and many had thought it to be unescapable. That belief was shattered in July 2015 when Guzman fled the facility through a sophisticated, mile-long tunnel that accomplices dug to the shower in his cell, complete with a motorcycle modified to run on rails laid down in the passage.

Cefereso No. 9 is just off the Pan-American highway about 14 miles south of downtown Juarez, in the middle of the barren, scorching Chihuahuan Desert. Other than a university campus about 2 miles to the east, there is hardly anything else for miles in any direction.

Gov. Cesar Duarte of Chihuahua state, where Juarez is, bragged about the facility's ability to hold Guzman, saying at a news conference that the transfer posed no risk for his state and was a sign of its improvements on security matters.

"There will be no escape," Duarte told local media. "If he was brought here from Altiplano it's because the security conditions are way above those of Altiplano, that's what the federal government settled on."

Authorities said the move was due to security upgrades at Altiplano and also part of a routine policy to rotate inmates for security reasons. Analysts said officials may also have wanted to shake up his confinement to thwart any escape plans that could have been in the works.

Vigil said it would be a mistake to try to hold Guzman in the Juarez prison for long.

According to a 2015 report by the governmental National Human Rights Commission, Cefereso No. 9 got the lowest overall quality rating for any of Mexico's 21 federal prisons at 6.63 on a scale of 0 to 10. Altiplano was the 10th best, with a rating of 7.32.

Cefereso No. 9 got low marks for guaranteeing a "dignified" stay and for handling inmates with special requirements. It got middling scores for guaranteeing prisoners' safety and well-being, and for rehabilitation.

It was also listed as somewhat overcrowded, with 1,012 inmates living in a facility designed to hold 848. Authorities acknowledge overcrowding is a widespread problem throughout Mexico's penitentiary system.

Overall, Cefereso No. 9 got a "yellow" evaluation for 2015 on the report's stoplight-style rating system. That was improved from "red" in 2014, even if its numerical score was still the country's lowest.

"Governability" was the only area where the prison received a "green," or good, rating. Altiplano also got a "green" rating for the category.

"El Chapo" first broke out of prison in 2001 and spent more than a decade on the run, becoming one of the world's most-wanted fugitives. He was recaptured in 2014, only to escape the following year. Mexican marines re-arrested him in the western state of Sinaloa in January, after he fled a safe house through a storm drain.

Guzman was returned to Altiplano, where officials beefed up his security regimen. He was placed under constant observation from a ceiling camera with no blind spots, and the floors of top-security cells were reinforced with metal bars and a 16-inch layer of concrete. Prison authorities also restricted his visits.