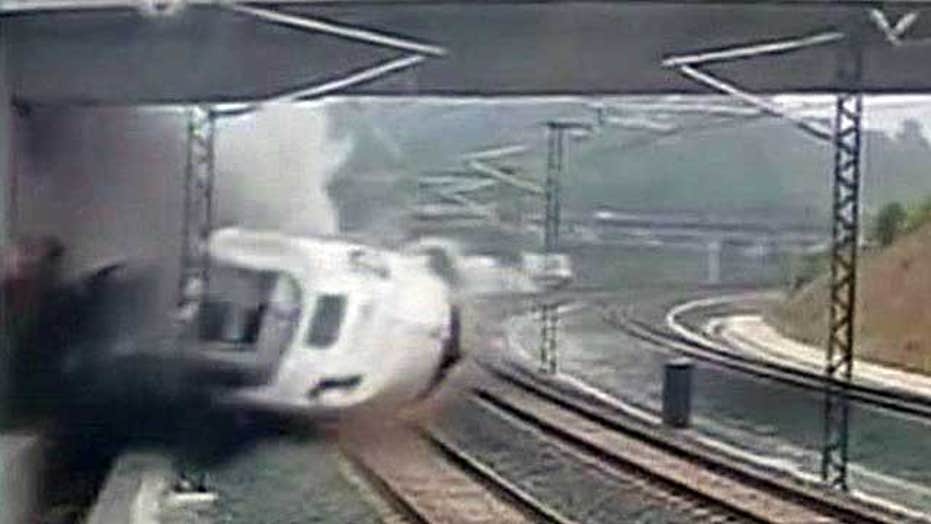 MADRID – Authorities in Spain opened a formal investigation into the train conductor in the deadly train crash that killed at least 80 in northwestern Spain Thursday after the train jumped the tracks on a curvy stretch just before arriving in the northwestern shrine city of Santiago de Compostela.

Reuters reported that the conductor was not immediately identified but cited local newspapers that reported driver Francisco Jose Garzon assisted in helping the victims and yelled, “I’ve derailed! What do I do?” during a phone call.

There were two drivers. One was trapped in his cabin and radioed that the train entered the bend at 120 mph, Reuters reported.

"We're only human! We're only human!" he told the station, the newspaper said, citing sources close to the investigation. "I hope there are no dead, because this will fall on my conscience."

Seventy three people were found dead at the scene and four died in hospitals, said Maria Pardo Rios, spokeswoman for the Galicia region's main court. At least 141 people were injured after the eight-carriage train carrying 218 passengers derailed about an hour before sunset Wednesday night.

A security camera has captured the moment when a Spanish train veers off the track and crashes into a wall at high speed. The footage posted Thursday on YouTube shows the train rounding a bend, making a turn to the left underneath a road overpass.

All the carriages can be seen starting to come off the tracks as the locomotive hurtles toward the camera position.

It was Spain's deadliest train accident since 1972, when a train collided with a bus in southwestern Spain, killing 86 people and injuring 112.

Rescue workers spent the night searching through toppled and smashed cars alongside the tracks at the crash site, and Pardo said it was possible that more bodies would be found at the scene.

As dawn arrived, cranes brought to the scene were used to lift the cars off the tracks and rescue workers were seen collecting passenger luggage and putting into the back of a truck next to the tracks.

The site itself was a scene of horror immediately after the crash, with at least one car catching fire and smokes billowing from the scene and another broke into two parts as residents of the urban neighborhood alongside the tracks tried to help victims out of the toppled cars.

Rescue workers lined up bodies covered in blankets alongside the tracks and some passengers were pulled out of broken windows. Television images showed one man atop a carriage lying on its side, using a pickaxe to try to smash through a window. Residents said other rescuers used rocks.

State-owned train operator Renfe said in a statement an unspecified number of staff were also on board the train during the 8.41 p.m. crash on a section of tracks about 2.5 miles from Santiago de Compostela that came online two years ago. Spanish media said the train had two conductors aboard and that both survived.

Renfe and track operator Adif were cooperating with a judge who has been appointed to investigate the accident, Renfe said. Spanish government officials declined comment on possible causes but said it appeared to be an accident and that there were no suspicions of terrorism.
Prime Minister Mariano Rajoy was heading Thursday to the scene of the crash.

He was born in Santiago de Compostela, where officials canceled ceremonies Thursday for its annual religious festival that attracts tens of thousands of Christian pilgrims from around the world.

Catholic pilgrims converge on the city to celebrate a festival honoring St. James, the disciple of Jesus whose remains are said to rest in a shrine. The city is the main gathering point for the faithful who make it to the end of the El Camino de Santiago pilgrimage route that has drawn Christians since the Middle Ages.

But the accident created a scene that was "Dante-esque," said Alberto Nunez Feijoo, president of the region of Galicia where Santiago de Compostela is the capital.